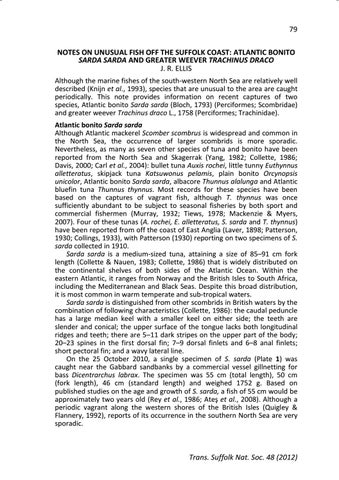 UNUSUAL FISH OFF THE SUFFOLK COAST

NOTES ON UNUSUAL FISH OFF THE SUFFOLK COAST: ATLANTIC BONITO SARDA SARDA AND GREATER WEEVER TRACHINUS DRACO J. R. ELLIS Although the marine fishes of the south-western North Sea are relatively well described (Knijn et al., 1993), species that are unusual to the area are caught periodically. This note provides information on recent captures of two species, Atlantic bonito Sarda sarda (Bloch, 1793) (Perciformes; Scombridae) and greater weever Trachinus draco L., 1758 (Perciformes; Trachinidae). Atlantic bonito Sarda sarda Although Atlantic mackerel Scomber scombrus is widespread and common in the North Sea, the occurrence of larger scombrids is more sporadic. Nevertheless, as many as seven other species of tuna and bonito have been reported from the North Sea and Skagerrak (Yang, 1982; Collette, 1986; Davis, 2000; Carl et al., 2004): bullet tuna Auxis rochei, little tunny Euthynnus alletteratus, skipjack tuna Katsuwonus pelamis, plain bonito Orcynopsis unicolor, Atlantic bonito Sarda sarda, albacore Thunnus alalunga and Atlantic bluefin tuna Thunnus thynnus. Most records for these species have been based on the captures of vagrant fish, although T. thynnus was once sufficiently abundant to be subject to seasonal fisheries by both sport and commercial fishermen (Murray, 1932; Tiews, 1978; Mackenzie & Myers, 2007). Four of these tunas (A. rochei, E. alletteratus, S. sarda and T. thynnus) have been reported from off the coast of East Anglia (Laver, 1898; Patterson, 1930; Collings, 1933), with Patterson (1930) reporting on two specimens of S. sarda collected in 1910. Sarda sarda is a medium-sized tuna, attaining a size of 85–91 cm fork length (Collette & Nauen, 1983; Collette, 1986) that is widely distributed on the continental shelves of both sides of the Atlantic Ocean. Within the eastern Atlantic, it ranges from Norway and the British Isles to South Africa, including the Mediterranean and Black Seas. Despite this broad distribution, it is most common in warm temperate and sub-tropical waters. Sarda sarda is distinguished from other scombrids in British waters by the combination of following characteristics (Collette, 1986): the caudal peduncle has a large median keel with a smaller keel on either side; the teeth are slender and conical; the upper surface of the tongue lacks both longitudinal ridges and teeth; there are 5–11 dark stripes on the upper part of the body; 20–23 spines in the first dorsal fin; 7–9 dorsal finlets and 6–8 anal finlets; short pectoral fin; and a wavy lateral line. On the 25 October 2010, a single specimen of S. sarda (Plate 1) was caught near the Gabbard sandbanks by a commercial vessel gillnetting for bass Dicentrarchus labrax. The specimen was 55 cm (total length), 50 cm (fork length), 46 cm (standard length) and weighed 1752 g. Based on published studies on the age and growth of S. sarda, a fish of 55 cm would be approximately two years old (Rey et al., 1986; Ateş et al., 2008). Although a periodic vagrant along the western shores of the British Isles (Quigley & Flannery, 1992), reports of its occurrence in the southern North Sea are very sporadic.

Greater weever Trachinus draco Of the two species of weever fish that occur in British Seas, the lesser weever Echiichthys vipera is widespread and abundant (e.g. Knijn et al., 1993), whilst the greater weever Trachinus draco has a more restricted distribution, occurring in parts of the English Channel (Parker-Humphreys, 2005) and Cardigan Bay (Parker-Humphreys, 2004). Elsewhere in European seas, T. draco is distributed from the British Isles to north-west Africa and the Mediterranean (Tortonese, 1986), and there is a locally common population in the Kattegat (Bagge, 2004). Although it was historically present in the North Sea, there have been few recent captures. Indeed, in the first half of the 20th century, several reports indicated that it was relatively common. Patterson (1905) remarked that greater weever was “abundant in fish shops during the summer months, being mostly brought in by trawlers. Occasionally entangled in the herringnets. It is excellent in the frying pan, although only eaten by the poorer classes”, and it was considered “common enough on Lowestoft wharf among ‘offal’” (Patterson, 1910). Collings (1933) considered greater weever “frequent about Gorleston; extremely abundant on Lowestoft trawling grounds”. However, there have been very few records of T. draco in the southern North Sea in recent decades. The decline of T. draco in this area was noted by several authors (Rijnsdorp et al.,, 1996; Philippart, 1998), and these studies suggested the decline may have been related to the increased use of beam trawlers and/or the impact of cold winters in the 1960s (e.g. Woodhead, 1964). Trachinus draco was not recorded in the young fish survey conducted in the area (Rogers et al., 1998), nor in beam trawl surveys of the south-western North Sea between 1993 and 2001 (Parker-Humphreys, 2005). This latter survey has subsequently recorded a single 24 cm individual in the North Sea in 2008 (51∙41°N, 2∙18°E). The International Bottom Trawl Survey (IBTS) of the North Sean has only reported three individual specimens of T. draco in the southern North Sea (ICES Division IVc) in the last three decades (a 38 cm specimen from 53∙28°N, 4∙42°E, 31∙m depth, 1993; 19 cm, 51∙56°N, 2∙13°E, 47 m, 2003; and 21 cm, 52∙24°N, 2∙36°E, 44 m, 2010). None of these were from the waters off East Anglia. In late January 2012, a single specimen of T. draco (Plate 2) was caught off the Suffolk coast by commercial longliner. The specimen was female, 36∙3 cm total length and weighed 301 g. Based on age and growth studies of T. draco, a specimen of 36 cm could be about 10–14 years old (Bagge, 2004). Acknowledgements Peter Caunter and Bill Pinney kindly provided the fish specimens. The specimen of Sarda sarda was deposited in the Natural History Museum (London).

UNUSUAL FISH OFF THE SUFFOLK COAST

Plate 1: Atlantic bonito Sarda sarda caught from off the coast of Suffolk, showing (a) whole specimen, (b) close up of caudal peduncle and (c) with dorsal fin spines displayed (p. 79).

Plate 2: Greater weever Trachinus draco caught from off the coast of Suffolk in January 2012 (p. 80).