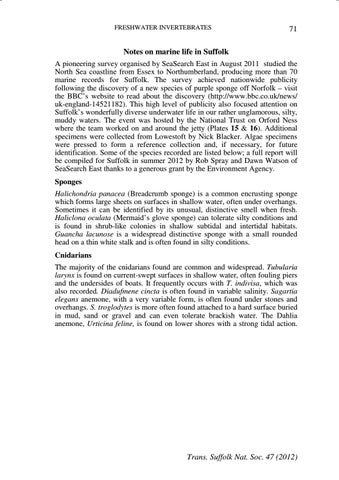 Notes on marine life in Suffolk A pioneering survey organised by SeaSearch East in August 2011 studied the North Sea coastline from Essex to Northumberland, producing more than 70 marine records for Suffolk. The survey achieved nationwide publicity following the discovery of a new species of purple sponge off Norfolk – visit the BBC’s website to read about the discovery (http://www.bbc.co.uk/news/ uk-england-14521182). This high level of publicity also focused attention on Suffolk’s wonderfully diverse underwater life in our rather unglamorous, silty, muddy waters. The event was hosted by the National Trust on Orford Ness where the team worked on and around the jetty (Plates 15 & 16). Additional specimens were collected from Lowestoft by Nick Blacker. Algae specimens were pressed to form a reference collection and, if necessary, for future identification. Some of the species recorded are listed below; a full report will be compiled for Suffolk in summer 2012 by Rob Spray and Dawn Watson of SeaSearch East thanks to a generous grant by the Environment Agency. Sponges Halichondria panacea (Breadcrumb sponge) is a common encrusting sponge which forms large sheets on surfaces in shallow water, often under overhangs. Sometimes it can be identified by its unusual, distinctive smell when fresh. Haliclona oculata (Mermaid’s glove sponge) can tolerate silty conditions and is found in shrub-like colonies in shallow subtidal and intertidal habitats. Guancha lacunose is a widespread distinctive sponge with a small rounded head on a thin white stalk and is often found in silty conditions. Cnidarians The majority of the cnidarians found are common and widespread. Tubularia larynx is found on current-swept surfaces in shallow water, often fouling piers and the undersides of boats. It frequently occurs with T. indivisa, which was also recorded. Diadufmene cincta is often found in variable salinity. Sagartia elegans anemone, with a very variable form, is often found under stones and overhangs. S. troglodytes is more often found attached to a hard surface buried in mud, sand or gravel and can even tolerate brackish water. The Dahlia anemone, Urticina feline, is found on lower shores with a strong tidal action.

Sea Gooseberry Pleurobrachia pileus is usually found in open water, especially in the summer and autumn, but can be washed up on-shore. Moon jellyfish Auralia aurita is Britain’s most common jellyfish, sometimes forming massive local populations. It is a pelagic species, but can also be found in estuaries and harbours. In addition, several individuals of Nematostella vectensis (Starlet sea anemone) were seen in the saline lagoons on Orford Ness. This tiny Biodiversity Action Plan species is listed as vulnerable by IUCN/WCMC and rare on the British Red List, and is protected under Schedule 5 of the Wildlife and Countryside Act 1981. Orford Ness itself was designated as a Special Area of Conservation for its saline lagoons. The Comb jelly Beroe cucumis is very uncommon on the east coast. Polychaete worms The Peacock Worm Sabella pavonina is widely distributed and locally abundant. This worm can grow to 30 cm long, but is very slender and lives permanently in a smooth, flexible, muddy tube that projects up out of the sand. The Sand Mason Worm Lanice conchilega is common in intertidal and subtidal sediments. This large worm lives in a tube which it builds out of sand grains and shell fragments and has a characteristic frayed end above the sand. One of the tube-building Keel Worms Pomatoceros sp. was also recorded. Crustaceans Several species of crustacean were found including barnacles (Cirripedia sp.), skeleton shrimp (Caprella sp.), Shore Crab Carcinus maenas, Sea toad or Great Spider Crab Hyas araneus, the isopod Idotea sp., the prawn Palaemon elegans and the amphipod Jassa falcate. Molluscs

Seven mollusc species were recorded, the Common Mussel Mytillus edulis and six nudibranchs: Dendronotus frondosus, Coryphella sp., Onchidoris bilamellata, Goniodoris nodosa, Facelina bostoniensis and Hermaea bifida. Echinoderms Two common species were found: Common Starfish Asterias rubens and Green Sea Urchin Psammechinus miliaris. Sea squirts - Ascidiacea One non-native species of sea squirt was found: Styella clava which originates from the Pacific and has been present in the UK since the 1950s. The native sea squirt known as Sea Grape Molgula sp. was also recorded. Fishes The Shanny Lipophrys pholis is a very common species from the combtooth blenny family. It can be found under seaweed from where it emerges at high tide to forage over the flooded shore and is often seen around man-made structures such as pilings. Liparis montagui¸ confusingly called Montagu’s Sea-Snail, is often found in estuaries.

Notes on marine life in Suffolk

Notes on marine life in Suffolk