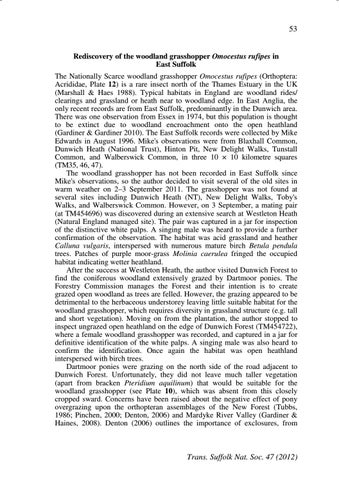 EFFECTS OF FOREST MANAGEMENT ON ACULEATES

Rediscovery of the woodland grasshopper Omocestus rufipes in East Suffolk The Nationally Scarce woodland grasshopper Omocestus rufipes (Orthoptera: Acrididae, Plate 12) is a rare insect north of the Thames Estuary in the UK (Marshall & Haes 1988). Typical habitats in England are woodland rides/ clearings and grassland or heath near to woodland edge. In East Anglia, the only recent records are from East Suffolk, predominantly in the Dunwich area. There was one observation from Essex in 1974, but this population is thought to be extinct due to woodland encroachment onto the open heathland (Gardiner & Gardiner 2010). The East Suffolk records were collected by Mike Edwards in August 1996. Mike's observations were from Blaxhall Common, Dunwich Heath (National Trust), Hinton Pit, New Delight Walks, Tunstall Common, and Walberswick Common, in three 10 Ă&#x2014; 10 kilometre squares (TM35, 46, 47). The woodland grasshopper has not been recorded in East Suffolk since Mike's observations, so the author decided to visit several of the old sites in warm weather on 2â&#x20AC;&#x201C;3 September 2011. The grasshopper was not found at several sites including Dunwich Heath (NT), New Delight Walks, Toby's Walks, and Walberswick Common. However, on 3 September, a mating pair (at TM454696) was discovered during an extensive search at Westleton Heath (Natural England managed site). The pair was captured in a jar for inspection of the distinctive white palps. A singing male was heard to provide a further confirmation of the observation. The habitat was acid grassland and heather Calluna vulgaris, interspersed with numerous mature birch Betula pendula trees. Patches of purple moor-grass Molinia caerulea fringed the occupied habitat indicating wetter heathland. After the success at Westleton Heath, the author visited Dunwich Forest to find the coniferous woodland extensively grazed by Dartmoor ponies. The Forestry Commission manages the Forest and their intention is to create grazed open woodland as trees are felled. However, the grazing appeared to be detrimental to the herbaceous understorey leaving little suitable habitat for the woodland grasshopper, which requires diversity in grassland structure (e.g. tall and short vegetation). Moving on from the plantation, the author stopped to inspect ungrazed open heathland on the edge of Dunwich Forest (TM454722), where a female woodland grasshopper was recorded, and captured in a jar for definitive identification of the white palps. A singing male was also heard to confirm the identification. Once again the habitat was open heathland interspersed with birch trees. Dartmoor ponies were grazing on the north side of the road adjacent to Dunwich Forest. Unfortunately, they did not leave much taller vegetation (apart from bracken Pteridium aquilinum) that would be suitable for the woodland grasshopper (see Plate 10), which was absent from this closely cropped sward. Concerns have been raised about the negative effect of pony overgrazing upon the orthopteran assemblages of the New Forest (Tubbs, 1986; Pinchen, 2000; Denton, 2006) and Mardyke River Valley (Gardiner & Haines, 2008). Denton (2006) outlines the importance of exclosures, from

Plate 10: Dartmoor ponies grazing on the north side of the road adjacent to Dunwich Forest (p. 53).

Rediscovery of the woodland grasshopper Omocestus rufipes in East Suffolk

Rediscovery of the woodland grasshopper Omocestus rufipes in East Suffolk