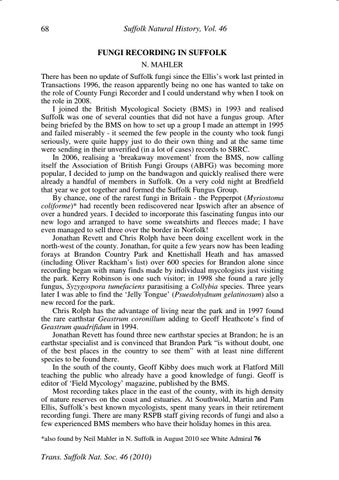 There has been no update of Suffolk fungi since the Ellis’s work last printed in Transactions 1996, the reason apparently being no one has wanted to take on the role of County Fungi Recorder and I could understand why when I took on the role in 2008. I joined the British Mycological Society (BMS) in 1993 and realised Suffolk was one of several counties that did not have a fungus group. After being briefed by the BMS on how to set up a group I made an attempt in 1995 and failed miserably - it seemed the few people in the county who took fungi seriously, were quite happy just to do their own thing and at the same time were sending in their unverified (in a lot of cases) records to SBRC. In 2006, realising a ‘breakaway movement’ from the BMS, now calling itself the Association of British Fungi Groups (ABFG) was becoming more popular, I decided to jump on the bandwagon and quickly realised there were already a handful of members in Suffolk. On a very cold night at Bredfield that year we got together and formed the Suffolk Fungus Group. By chance, one of the rarest fungi in Britain - the Pepperpot (Myriostoma coliforme)* had recently been rediscovered near Ipswich after an absence of over a hundred years. I decided to incorporate this fascinating fungus into our new logo and arranged to have some sweatshirts and fleeces made; I have even managed to sell three over the border in Norfolk! Jonathan Revett and Chris Rolph have been doing excellent work in the north-west of the county. Jonathan, for quite a few years now has been leading forays at Brandon Country Park and Knettishall Heath and has amassed (including Oliver Rackham’s list) over 600 species for Brandon alone since recording began with many finds made by individual mycologists just visiting the park. Kerry Robinson is one such visitor; in 1998 she found a rare jelly fungus, Syzygospora tumefaciens parasitising a Collybia species. Three years later I was able to find the ‘Jelly Tongue’ (Psuedohydnum gelatinosum) also a new record for the park. Chris Rolph has the advantage of living near the park and in 1997 found the rare earthstar Geastrum coronillum adding to Geoff Heathcote’s find of Geastrum quadrifidum in 1994. Jonathan Revett has found three new earthstar species at Brandon; he is an earthstar specialist and is convinced that Brandon Park “is without doubt, one of the best places in the country to see them” with at least nine different species to be found there. In the south of the county, Geoff Kibby does much work at Flatford Mill teaching the public who already have a good knowledge of fungi. Geoff is editor of ‘Field Mycology’ magazine, published by the BMS. Most recording takes place in the east of the county, with its high density of nature reserves on the coast and estuaries. At Southwold, Martin and Pam Ellis, Suffolk’s best known mycologists, spent many years in their retirement recording fungi. There are many RSPB staff giving records of fungi and also a few experienced BMS members who have their holiday homes in this area. *also found by Neil Mahler in N. Suffolk in August 2010 see White Admiral 76

Dr Rob Dryden has been leading forays all over Suffolk for many years and has sent in many records. In the north of the county Sheila Francis, who has many years of experience with the smaller fungi, has been quietly working away in the Wenhaston, Southwold and Lowestoft areas. Professor Richard Fortey often visits this area with his colleague Dr Stuart Skeates. They have added many new species to the Suffolk list; in 2009, they discovered a new site for the Sandy Stilt Puffball Battarrea phalloides at Pin Mill. With few voucher specimens and no knowledge of some recorder’s abilities it has been difficult to validate a lot of records. I’ve had to reject some claims and in other cases I have had to give the benefit of the doubt. One particular problem I have yet to resolve has been a beautiful little discomycete fungus called the Scarlet Elf Cup (Sarcoscypha coccinea). This appears in spring commonly in damp Alder Carr on rotting wood surrounded by wet moss. When the Ellis’s recorded it, S. coccinea was the only species known to occur here, but we now know there is another, almost identical species S. austriaca, which can only be separated under the microscope. It appears that austriaca is now known to be more common than S. coccinea. Without vouchers it is impossible to tell which species the Ellis’s were recording. I have no doubt they placed their first find under the microscope to confirm the species, and there was no need at the time, to assume the others were any different. Norfolk had a similar problem with Ted Ellis’s records and no doubt every other county recorder had similar problems where no voucher material has been deposited. Captains Wood at Sudbourne has produced some very interesting finds, the rare Oak Polypore (Piptoporus quercinus) had already been found at another nearby location and I was able to find this on my first visit to the wood. Other sites within Suffolk are at Staverton and Sotterly Parks - the latter found by Stuart Skeates and Richard Fortey. Other rarities at Captains Wood are the Moth Ball Crust (Scytinostroma portentosum Plate 14) found on the underside of a dead willow log and the Umbrella Polypore (Polyporus umbellatus, Plate 15) both new to Suffolk. It was hoped that another rare species Phellinus robustus, had been found on an ancient Oak, but this failed to produce a mature bracket and may now be dead; I shall continue to monitor the tree. In 2009, the BMS Foray Committee visited East Suffolk, spending a week based at Leiston Abbey and surveying local sites. Members were very impressed with the old Tithe Barn which was used as a laboratory. Although the meeting was held in early November, weather conditions were good with overnight rain and warm sunny days. This coastal area was chosen because with it’s estuaries, marsh, woodlands and of course the Sandlings, it provides greater biodiversity than the heavily farmed inland areas, until you come to the Brecks which hopefully will be visited by the BMS foray at a later date. No mycology visit to Suffolk would be complete without seeing the famed Sandy Stiltball fungus (Battarrea phalloides) so I took a small group to the

well known site at Blyford where, as expected, there were a few fruiting bodies showing. We visited many sites near the coast and many new species were found not recorded in the county before. As expected, Staverton Park produced some good records; the bracket fungus Phellinus wahlbergii was discovered, only the second record for the whole of Britain and only the second record for mainland Europe. When the finder went back the next day to be certain which species of tree it was found on, she spotted another unknown bracket fungus which after several weeks of examination under the microscope was determined as Phellinus torulosus - a Red Data species. This had been found in Suffolk before growing on Sweet Chestnut at Dodnash Wood in 1956 during a BMS foray based at Flatford Mill. During our visit to Minsmere we came across the fantastic Bearded Tooth or Lion’s Mane fungus (Hericium erinaceus) on the underside of a very large dead Beech which had fallen rather precariously into a pit and I risked life and limb to get a photograph (Plate 16). Also at Minsmere, Professor Bruce Ing, Britain’s slime mould expert, came across a new species for Britain – Physarum braunianum, this has only been found once in Switzerland (by Bruce again) twice in Germany, once in New Zealand, and twice in USA. It is a very easy slime mould to identify so therefore must be genuinely rare in the world. Overall many new species were added to the Suffolk list, too many to mention here, but which eventually will be available for all to see on the NBN Gateway site. A fuller report on the meeting by Richard Fortey was published in 2010 in Mycologist News 102: 5–8. Available online at: http://www.britmycolsoc.org.uk/index.php/download_file/54/ We all had a fantastic week at Leiston Abbey and special thanks must be made to the staff who made our visit more enjoyable. Neil Mahler 10 Riverdale Court King George’s Avenue Leiston Suffolk IP16 4JU