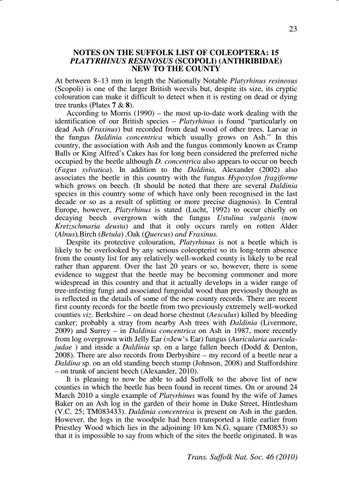 23 NOTES ON THE SUFFOLK LIST OF COLEOPTERA: 15 PLATYRHINUS RESINOSUS (SCOPOLI) (ANTHRIBIDAE) NEW TO THE COUNTY At between 8–13 mm in length the Nationally Notable Platyrhinus resinosus (Scopoli) is one of the larger British weevils but, despite its size, its cryptic colouration can make it difficult to detect when it is resting on dead or dying tree trunks (Plates 7 & 8). According to Morris (1990) – the most up-to-date work dealing with the identification of our British species – Platyrhinus is found “particularly on dead Ash (Fraxinus) but recorded from dead wood of other trees. Larvae in the fungus Daldinia concentrica which usually grows on Ash.” In this country, the association with Ash and the fungus commonly known as Cramp Balls or King Alfred’s Cakes has for long been considered the preferred niche occupied by the beetle although D. concentrica also appears to occur on beech (Fagus sylvatica). In addition to the Daldinia, Alexander (2002) also associates the beetle in this country with the fungus Hypoxylon fragiforme which grows on beech. (It should be noted that there are several Daldinia species in this country some of which have only been recognised in the last decade or so as a result of splitting or more precise diagnosis). In Central Europe, however, Platyrhinus is stated (Lucht, 1992) to occur chiefly on decaying beech overgrown with the fungus Ustulina vulgaris (now Kretzschmaria deusta) and that it only occurs rarely on rotten Alder (Alnus),Birch (Betula) ,Oak (Quercus) and Fraxinus. Despite its protective colouration, Platyrhinus is not a beetle which is likely to be overlooked by any serious coleopterist so its long-term absence from the county list for any relatively well-worked county is likely to be real rather than apparent. Over the last 20 years or so, however, there is some evidence to suggest that the beetle may be becoming commoner and more widespread in this country and that it actually develops in a wider range of tree-infesting fungi and associated fungoidal wood than previously thought as is reflected in the details of some of the new county records. There are recent first county records for the beetle from two previously extremely well-worked counties viz. Berkshire – on dead horse chestnut (Aesculus) killed by bleeding canker; probably a stray from nearby Ash trees with Daldinia (Livermore, 2009) and Surrey – in Daldinia concentrica on Ash in 1987, more recently from log overgrown with Jelly Ear (=Jew’s Ear) fungus (Auricularia auriculajudae ) and inside a Daldinia sp. on a large fallen beech (Dodd & Denton, 2008). There are also records from Derbyshire – my record of a beetle near a Daldina sp. on an old standing beech stump (Johnson, 2008) and Staffordshire – on trunk of ancient beech (Alexander, 2010). It is pleasing to now be able to add Suffolk to the above list of new counties in which the beetle has been found in recent times. On or around 24 March 2010 a single example of Platyrhinus was found by the wife of James Baker on an Ash log in the garden of their home in Duke Street, Hintlesham (V.C. 25; TM083433). Daldinia concentrica is present on Ash in the garden. However, the logs in the woodpile had been transported a little earlier from Priestley Wood which lies in the adjoining 10 km N.G. square (TM0853) so that it is impossible to say from which of the sites the beetle originated. It was Trans. Suffolk Nat. Soc. 46 (2010)

photographed by Robert Garrod before being released at Priestley Wood. His superb photograph of the head far surpasses any of the numerous pictures of this beetle to be found on the internet, making it seem positively crocodilian and somewhat surreal. Unfortunately, I didn’t learn about the find until midAugust; accordingly, I shall be visiting both sites next spring to see if I can locate the species myself. In concluding, attention should be drawn to the occurrence of another scarce and relatively large Anthribid which was added to our list in recent times (Nash, 2001). Early workers such as James Stephens cited Platystomos albinus (L.) as occurring in Norfolk but not Suffolk. Between 1994 and 2000 the species was recorded at four localities in the Breck, three in Suffolk and one in Norfolk with the latter representing the only known capture from that county since Stephens’ 1839 citation. I commented at that time that the beetle might perhaps be another of those currently benefitting from climate amelioration. The same might be true for Platyrhinus resinosus. Acknowledgements I thank James Baker for informing me of his find and Robert Garrod for allowing me to use his photographs. References Alexander, K. N. A. (2002). The invertebrates of living and decaying timber in Britain and Ireland – a provisional annotated checklist. English Nature Research Report 467. Peterborough: English Nature. Alexander, K. N. A. (2010). Diplocoelus fagi (Chevrolat in Guérin – Méneville) (Biphyllidae) and Platyrhinus resinosus (Scopoli) (Anthribidae) apparently new to Staffordshire (VC 39) and other saproxylic beetle records. The Coleopterist 18: 89. Dodd, S. & Denton, J. (2008). Recent records of Platyrhinus resinosus (Anthribidae) in Surrey. British Journal of Entomology and Natural History 21: 224. Johnson, C. (2008). Saproxylic Coleoptera from Calke, Chatsworth, Hardwick and Kedleston Parks, Derbyshire, 1881–1999. The Coleopterist 17: 23–41. Livermore, L. (2009). Platyrhinus resinosus (Scopoli) (Anthribidae) at Silwood Park: A new county record for Berkshire. The Coleopterist 18: 158. Lucht, W. (1992). Family Bruchidae pp.144–149 in Koch, K. Die Käfer Mitteleuropas Okologie Band 3. Krefeld: Goecke & Evers. Morris, M. G. (1990). Orthocerous Weevils.Coleoptera Curculionoidea. (Nemonychiidae, Anthribidae, Urodontidae Attelabidae and Apionidae). Handbooks for the Identification of British Insects 5. Part 16. Nash, D. R. (2001). Notes on the Suffolk list of Coleoptera: 8. Fourteen species new to the Suffolk list with significant records from the year 2000. Transactions of the Suffolk Naturalists’ Society 37: 67– 81. David Ridley Nash 3 Church Lane Brantham Suffolk CO11 1PU

Plate 8: Platyrhinus resinosus (Scopoli) is one of the larger British weevils but, despite its size, its cryptic colouration can make it difficult to detect when it is resting on dead or dying tree trunks (p. 23).

NOTES ON THE SUFFOLK LIST OF COLEOPTERA: 15 PLATYRHINUS RESINOSUS NEW TO THE COUNTY

NOTES ON THE SUFFOLK LIST OF COLEOPTERA: 15 PLATYRHINUS RESINOSUS NEW TO THE COUNTY