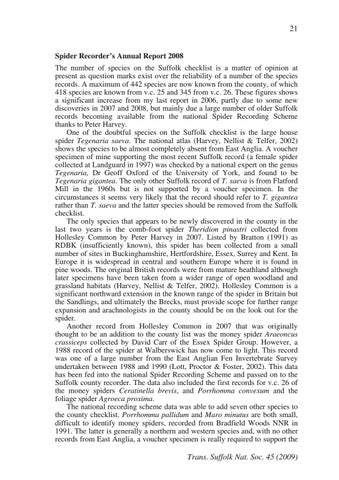 Spider Recorderâ&#x20AC;&#x2122;s Annual Report 2008 The number of species on the Suffolk checklist is a matter of opinion at present as question marks exist over the reliability of a number of the species records. A maximum of 442 species are now known from the county, of which 418 species are known from v.c. 25 and 345 from v.c. 26. These figures shows a significant increase from my last report in 2006, partly due to some new discoveries in 2007 and 2008, but mainly due a large number of older Suffolk records becoming available from the national Spider Recording Scheme thanks to Peter Harvey. One of the doubtful species on the Suffolk checklist is the large house spider Tegenaria saeva. The national atlas (Harvey, Nellist & Telfer, 2002) shows the species to be almost completely absent from East Anglia. A voucher specimen of mine supporting the most recent Suffolk record (a female spider collected at Landguard in 1997) was checked by a national expert on the genus Tegenaria, Dr Geoff Oxford of the University of York, and found to be Tegenaria gigantea. The only other Suffolk record of T. saeva is from Flatford Mill in the 1960s but is not supported by a voucher specimen. In the circumstances it seems very likely that the record should refer to T. gigantea rather than T. saeva and the latter species should be removed from the Suffolk checklist. The only species that appears to be newly discovered in the county in the last two years is the comb-foot spider Theridion pinastri collected from Hollesley Common by Peter Harvey in 2007. Listed by Bratton (1991) as RDBK (insufficiently known), this spider has been collected from a small number of sites in Buckinghamshire, Hertfordshire, Essex, Surrey and Kent. In Europe it is widespread in central and southern Europe where it is found in pine woods. The original British records were from mature heathland although later specimens have been taken from a wider range of open woodland and grassland habitats (Harvey, Nellist & Telfer, 2002). Hollesley Common is a significant northward extension in the known range of the spider in Britain but the Sandlings, and ultimately the Brecks, must provide scope for further range expansion and arachnologists in the county should be on the look out for the spider. Another record from Hollesley Common in 2007 that was originally thought to be an addition to the county list was the money spider Araeoncus crassiceps collected by David Carr of the Essex Spider Group. However, a 1988 record of the spider at Walberswick has now come to light. This record was one of a large number from the East Anglian Fen Invertebrate Survey undertaken between 1988 and 1990 (Lott, Proctor & Foster, 2002). This data has been fed into the national Spider Recording Scheme and passed on to the Suffolk county recorder. The data also included the first records for v.c. 26 of the money spiders Ceratinella brevis, and Porrhomma convexum and the foliage spider Agroeca proxima. The national recording scheme data was able to add seven other species to the county checklist. Porrhomma pallidum and Maro minutus are both small, difficult to identify money spiders, recorded from Bradfield Woods NNR in 1991. The latter is generally a northern and western species and, with no other records from East Anglia, a voucher specimen is really required to support the

record although this has not been sought to date. A number of the ‘new’ records arise from Dr. Eric Duffey’s collecting in the county over the last fifty years. He took the first specimens of the nationally scarce orb-web spider Araniella displicata from Tuddenham in 1957 and of the wolf spider Pardosa proxima from Foxhole Heath in 1963. Also, he collected the nationally scarce jumping spider Aelurillus v-insignitus from Wangford, still the only Suffolk locality, in 1976 and again in 1993. None of the foregoing should suggest that Suffolk based arachnologists have not been active in 2007 and 2008. Robertus neglectus, a comb-foot spider, was recorded from a location in Shotley in 2008. This was initially thought to be a new county record but a 1980 record from v.c. 26 has since come to light. Similarly, Ray Ruffell recorded the money-spider Agyneta conigera and the jumping spider Sitticus pubescens from Milden in 2008 but these were pre-dated by records in the national data set. References Bratton, J. H. (ed.) (1991) British Red Data Books 3: invertebrates other than insects. Peterborough: JNCC. Harvey, P. R., Nellist, D .R. and Telfer, M. G. (eds) (2002) Provisional atlas of British spiders (Arachnida, Araneae) Volumes 1 & 2. Huntingdon: BRC. Lott, D. A., Procter, D. A. and Foster, A. P. (2002) East Anglian Fen Invertebrate Survey. English Nature Research Reports No. 477. Paul Lee Oakdene The Heath Tattingstone Ipswich IP9 2LX