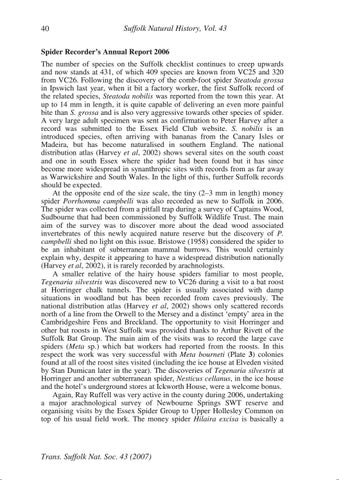 Spider Recorder’s Annual Report 2006 The number of species on the Suffolk checklist continues to creep upwards and now stands at 431, of which 409 species are known from VC25 and 320 from VC26. Following the discovery of the comb-foot spider Steatoda grossa in Ipswich last year, when it bit a factory worker, the first Suffolk record of the related species, Steatoda nobilis was reported from the town this year. At up to 14 mm in length, it is quite capable of delivering an even more painful bite than S. grossa and is also very aggressive towards other species of spider. A very large adult specimen was sent as confirmation to Peter Harvey after a record was submitted to the Essex Field Club website. S. nobilis is an introduced species, often arriving with bananas from the Canary Isles or Madeira, but has become naturalised in southern England. The national distribution atlas (Harvey et al, 2002) shows several sites on the south coast and one in south Essex where the spider had been found but it has since become more widespread in synanthropic sites with records from as far away as Warwickshire and South Wales. In the light of this, further Suffolk records should be expected. At the opposite end of the size scale, the tiny (2–3 mm in length) money spider Porrhomma campbelli was also recorded as new to Suffolk in 2006. The spider was collected from a pitfall trap during a survey of Captains Wood, Sudbourne that had been commissioned by Suffolk Wildlife Trust. The main aim of the survey was to discover more about the dead wood associated invertebrates of this newly acquired nature reserve but the discovery of P. campbelli shed no light on this issue. Bristowe (1958) considered the spider to be an inhabitant of subterranean mammal burrows. This would certainly explain why, despite it appearing to have a widespread distribution nationally (Harvey et al, 2002), it is rarely recorded by arachnologists. A smaller relative of the hairy house spiders familiar to most people, Tegenaria silvestris was discovered new to VC26 during a visit to a bat roost at Horringer chalk tunnels. The spider is usually associated with damp situations in woodland but has been recorded from caves previously. The national distribution atlas (Harvey et al, 2002) shows only scattered records north of a line from the Orwell to the Mersey and a distinct ‘empty’ area in the Cambridgeshire Fens and Breckland. The opportunity to visit Horringer and other bat roosts in West Suffolk was provided thanks to Arthur Rivett of the Suffolk Bat Group. The main aim of the visits was to record the large cave spiders (Meta sp.) which bat workers had reported from the roosts. In this respect the work was very successful with Meta bourneti (Plate 3) colonies found at all of the roost sites visited (including the ice house at Elveden visited by Stan Dumican later in the year). The discoveries of Tegenaria silvestris at Horringer and another subterranean spider, Nesticus cellanus, in the ice house and the hotel’s underground stores at Ickworth House, were a welcome bonus. Again, Ray Ruffell was very active in the county during 2006, undertaking a major arachnological survey of Newbourne Springs SWT reserve and organising visits by the Essex Spider Group to Upper Hollesley Common on top of his usual field work. The money spider Hilaira excisa is basically a

northern and western species associated with wetland habitats in areas of high rainfall. As such, it is almost totally absent from the south east of England and especially East Anglia. However, it is known to occur in narrow, steep-sided steep valleys in drier regions, presumably due to high humidity levels being maintained throughout the year in such valleys. The only East Anglian records of the spider appear to be from Suffolk – alder carr at Heveningham Hall in 1996, Braziers Wood, Ipswich in 2000 and now Newbourne Springs where it was collected by Ray during his survey. References Bristowe, W. S. (1958).The world of spiders. Collins New Naturalist, London. Harvey, P. R., Nellist, D. R. and Telfer, M. G. (eds) (2002). Provisional atlas of British spiders (Arachnida, Araneae) Volumes 1 & 2. BRC, Huntingdon. Paul Lee, Oakdene, The Heath, Tattingstone, Ipswich IP9 2LX Other Arthropods Recorder’s Annual Report 2005/6 No report on the other arthropod groups was produced last year so this report covers both 2005 and 2006. The woodlouse fauna of Suffolk remains unchanged at present although recent work has split the common pygmy woodlouse Trichoniscus pusillus into two species, T. pusillus s.s. and T. provisorius, both of which probably occur in Suffolk. The only woodlouse records worthy of mention relate to species with very specific habitat requirements that usually means records are only made when searches are undertaken for the particular species. One such species is the sea slater Ligia oceanica which requires a hard substrate in an intertidal location. The maritime habits of Ligia are different to all other woodlice so it has to be sought out rather than recorded as part of general survey work. Most recent records of L. oceanica are from the Orwell estuary where I usually find time to search for it each year. Therefore it was pleasing to receive two records of the sea slater from Lowestoft, both submitted by Colin Jacobs. The second species with specific habitat requirements is Porcellionides pruinosus. The specific name refers to the distinctive plum-like surface “bloom” seen on live animals. It usually occurs in piles of rotting dung, compost or farmyard manure and can be very common here but not everyone is willing to search such habitats! Obviously, Jon Daws was willing to get his hands dirty when he collected P. pruinosus from a wide range of sites across v.c.25 during 1994. However the species had not been seen in the county since that year until a thriving colony appeared in a compost bin in my Tattingstone garden in 2006. This is a species that SNS members could usefully record whilst working in the garden. Lithobius curtipes is an uncommon centipede with only half a dozen records from Suffolk. It is typically found in woodland and may be an indicator of undisturbed sites. A male specimen was collected from Hintlesham Great Wood during the SNS field visit to the site in 2005. This field meeting also produced the latest addition to the Suffolk millipede fauna,

the flatback millipede Polydesmus testaceus. This is a nationally notable species, known only from a handful of mainly open, calcareous grassland sites from Kent to South Wales. Although there is an old record from Essex, its discovery in Suffolk was initially surprising, especially as Hintlesham appears to be not only the most northerly location for the species in Britain but also one of the most northerly in Europe. However, the habitat, base-rich open woodland, is typical of the millipede in parts of its continental range, especially the northern records from the Nordrhein-Westfalen region of Germany. The population of P. testaceus is clearly well established at the site and return visits in 2005 and 2006 confirmed its presence throughout Ramsey Wood and Hintlesham Little Wood as well as Hintlesham Great Wood. The Hintlesham Woods are also notable in that they are the only UK site where all five native species of the genus Polydesmus are known to occur together. This includes P. denticulatus, a most unusual male specimen of which was collected in 2005 from Hintlesham. The animal had a number of malformed legs such that each leg was branched to end in two claws and also had a number of abnormally thickened legs. One leg had clearly been damaged as it was reduced to a blackened stump but there were no obvious signs that the other legs had re-grown after being damaged. Paul Lee, Oakdene, The Heath, Tattingstone, Ipswich IP9 2LX