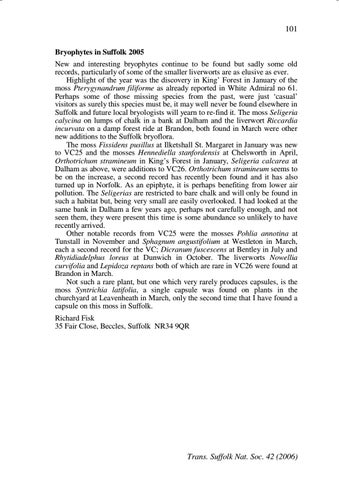 Bryophytes in Suffolk 2005 New and interesting bryophytes continue to be found but sadly some old records, particularly of some of the smaller liverworts are as elusive as ever. Highlight of the year was the discovery in King’ Forest in January of the moss Pterygynandrum filiforme as already reported in White Admiral no 61. Perhaps some of those missing species from the past, were just ‘casual’ visitors as surely this species must be, it may well never be found elsewhere in Suffolk and future local bryologists will yearn to re-find it. The moss Seligeria calycina on lumps of chalk in a bank at Dalham and the liverwort Riccardia incurvata on a damp forest ride at Brandon, both found in March were other new additions to the Suffolk bryoflora. The moss Fissidens pusillus at Ilketshall St. Margaret in January was new to VC25 and the mosses Hennediella stanfordensis at Chelsworth in April, Orthotrichum stramineum in King’s Forest in January, Seligeria calcarea at Dalham as above, were additions to VC26. Orthotrichum stramineum seems to be on the increase, a second record has recently been found and it has also turned up in Norfolk. As an epiphyte, it is perhaps benefiting from lower air pollution. The Seligerias are restricted to bare chalk and will only be found in such a habitat but, being very small are easily overlooked. I had looked at the same bank in Dalham a few years ago, perhaps not carefully enough, and not seen them, they were present this time is some abundance so unlikely to have recently arrived. Other notable records from VC25 were the mosses Pohlia annotina at Tunstall in November and Sphagnum angustifolium at Westleton in March, each a second record for the VC; Dicranum fuscescens at Bentley in July and Rhytidiadelphus loreus at Dunwich in October. The liverworts Nowellia curvifolia and Lepidoza reptans both of which are rare in VC26 were found at Brandon in March. Not such a rare plant, but one which very rarely produces capsules, is the moss Syntrichia latifolia, a single capsule was found on plants in the churchyard at Leavenheath in March, only the second time that I have found a capsule on this moss in Suffolk. Richard Fisk 35 Fair Close, Beccles, Suffolk NR34 9QR