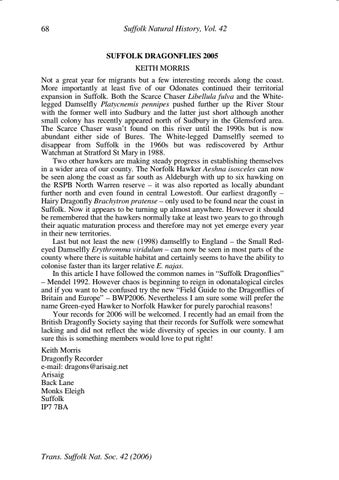 SUFFOLK DRAGONFLIES 2005 KEITH MORRIS Not a great year for migrants but a few interesting records along the coast. More importantly at least five of our Odonates continued their territorial expansion in Suffolk. Both the Scarce Chaser Libellula fulva and the Whitelegged Damselfly Platycnemis pennipes pushed further up the River Stour with the former well into Sudbury and the latter just short although another small colony has recently appeared north of Sudbury in the Glemsford area. The Scarce Chaser wasn’t found on this river until the 1990s but is now abundant either side of Bures. The White-legged Damselfly seemed to disappear from Suffolk in the 1960s but was rediscovered by Arthur Watchman at Stratford St Mary in 1988. Two other hawkers are making steady progress in establishing themselves in a wider area of our county. The Norfolk Hawker Aeshna isosceles can now be seen along the coast as far south as Aldeburgh with up to six hawking on the RSPB North Warren reserve – it was also reported as locally abundant further north and even found in central Lowestoft. Our earliest dragonfly – Hairy Dragonfly Brachytron pratense – only used to be found near the coast in Suffolk. Now it appears to be turning up almost anywhere. However it should be remembered that the hawkers normally take at least two years to go through their aquatic maturation process and therefore may not yet emerge every year in their new territories. Last but not least the new (1998) damselfly to England – the Small Redeyed Damselfly Erythromma viridulum – can now be seen in most parts of the county where there is suitable habitat and certainly seems to have the ability to colonise faster than its larger relative E. najas. In this article I have followed the common names in “Suffolk Dragonflies” – Mendel 1992. However chaos is beginning to reign in odonatalogical circles and if you want to be confused try the new “Field Guide to the Dragonflies of Britain and Europe” – BWP2006. Nevertheless I am sure some will prefer the name Green-eyed Hawker to Norfolk Hawker for purely parochial reasons! Your records for 2006 will be welcomed. I recently had an email from the British Dragonfly Society saying that their records for Suffolk were somewhat lacking and did not reflect the wide diversity of species in our county. I am sure this is something members would love to put right! Keith Morris Dragonfly Recorder e-mail: dragons@arisaig.net Arisaig Back Lane Monks Eleigh Suffolk IP7 7BA