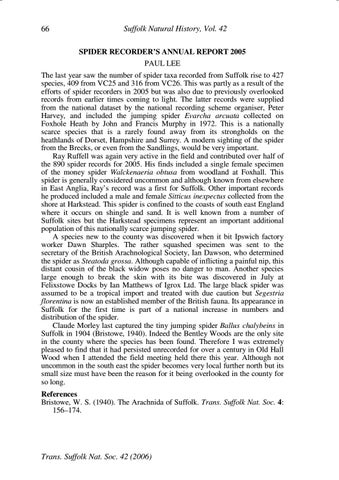 The last year saw the number of spider taxa recorded from Suffolk rise to 427 species, 409 from VC25 and 316 from VC26. This was partly as a result of the efforts of spider recorders in 2005 but was also due to previously overlooked records from earlier times coming to light. The latter records were supplied from the national dataset by the national recording scheme organiser, Peter Harvey, and included the jumping spider Evarcha arcuata collected on Foxhole Heath by John and Francis Murphy in 1972. This is a nationally scarce species that is a rarely found away from its strongholds on the heathlands of Dorset, Hampshire and Surrey. A modern sighting of the spider from the Brecks, or even from the Sandlings, would be very important. Ray Ruffell was again very active in the field and contributed over half of the 890 spider records for 2005. His finds included a single female specimen of the money spider Walckenaeria obtusa from woodland at Foxhall. This spider is generally considered uncommon and although known from elsewhere in East Anglia, Ray’s record was a first for Suffolk. Other important records he produced included a male and female Sitticus inexpectus collected from the shore at Harkstead. This spider is confined to the coasts of south east England where it occurs on shingle and sand. It is well known from a number of Suffolk sites but the Harkstead specimens represent an important additional population of this nationally scarce jumping spider. A species new to the county was discovered when it bit Ipswich factory worker Dawn Sharples. The rather squashed specimen was sent to the secretary of the British Arachnological Society, Ian Dawson, who determined the spider as Steatoda grossa. Although capable of inflicting a painful nip, this distant cousin of the black widow poses no danger to man. Another species large enough to break the skin with its bite was discovered in July at Felixstowe Docks by Ian Matthews of Igrox Ltd. The large black spider was assumed to be a tropical import and treated with due caution but Segestria florentina is now an established member of the British fauna. Its appearance in Suffolk for the first time is part of a national increase in numbers and distribution of the spider. Claude Morley last captured the tiny jumping spider Ballus chalybeins in Suffolk in 1904 (Bristowe, 1940). Indeed the Bentley Woods are the only site in the county where the species has been found. Therefore I was extremely pleased to find that it had persisted unrecorded for over a century in Old Hall Wood when I attended the field meeting held there this year. Although not uncommon in the south east the spider becomes very local further north but its small size must have been the reason for it being overlooked in the county for so long. References Bristowe, W. S. (1940). The Arachnida of Suffolk. Trans. Suffolk Nat. Soc. 4: 156–174.