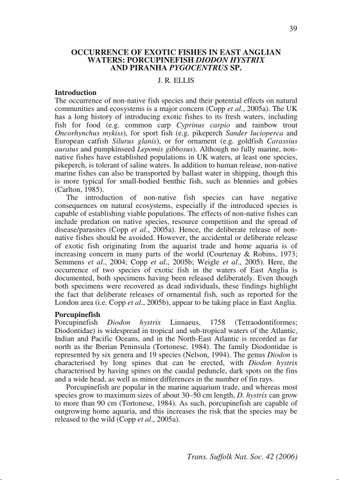 OCCURRENCE OF EXOTIC FISHES IN EAST ANGLIAN WATERS: PORCUPINEFISH DIODON HYSTRIX AND PIRANHA PYGOCENTRUS SP. J. R. ELLIS Introduction The occurrence of non-native fish species and their potential effects on natural communities and ecosystems is a major concern (Copp et al., 2005a). The UK has a long history of introducing exotic fishes to its fresh waters, including fish for food (e.g. common carp Cyprinus carpio and rainbow trout Oncorhynchus mykiss), for sport fish (e.g. pikeperch Sander lucioperca and European catfish Silurus glanis), or for ornament (e.g. goldfish Carassius auratus and pumpkinseed Lepomis gibbosus). Although no fully marine, nonnative fishes have established populations in UK waters, at least one species, pikeperch, is tolerant of saline waters. In addition to human release, non-native marine fishes can also be transported by ballast water in shipping, though this is more typical for small-bodied benthic fish, such as blennies and gobies (Carlton, 1985). The introduction of non-native fish species can have negative consequences on natural ecosystems, especially if the introduced species is capable of establishing viable populations. The effects of non-native fishes can include predation on native species, resource competition and the spread of disease/parasites (Copp et al., 2005a). Hence, the deliberate release of nonnative fishes should be avoided. However, the accidental or deliberate release of exotic fish originating from the aquarist trade and home aquaria is of increasing concern in many parts of the world (Courtenay & Robins, 1973; Semmens et al., 2004; Copp et al., 2005b; Weigle et al., 2005). Here, the occurrence of two species of exotic fish in the waters of East Anglia is documented, both specimens having been released deliberately. Even though both specimens were recovered as dead individuals, these findings highlight the fact that deliberate releases of ornamental fish, such as reported for the London area (i.e. Copp et al., 2005b), appear to be taking place in East Anglia. Porcupinefish Porcupinefish Diodon hystrix Linnaeus, 1758 (Tetraodontiformes; Diodontidae) is widespread in tropical and sub-tropical waters of the Atlantic, Indian and Pacific Oceans, and in the North-East Atlantic is recorded as far north as the Iberian Peninsula (Tortonese, 1984). The family Diodontidae is represented by six genera and 19 species (Nelson, 1994). The genus Diodon is characterised by long spines that can be erected, with Diodon hystrix characterised by having spines on the caudal peduncle, dark spots on the fins and a wide head, as well as minor differences in the number of fin rays. Porcupinefish are popular in the marine aquarium trade, and whereas most species grow to maximum sizes of about 30â&#x20AC;&#x201C;50 cm length, D. hystrix can grow to more than 90 cm (Tortonese, 1984). As such, porcupinefish are capable of outgrowing home aquaria, and this increases the risk that the species may be released to the wild (Copp et al., 2005a).

A dead specimen of porcupinefish was found washed up on Winterton Beach on 17 September 2005. The specimen (Plate 2) was 50 cm in standard length (weight = 3222 g) and the standard length/head width was 2:8, thus characterising the specimen as D. hystrix (Leis, 2002). Porcupinefish do occur in tropical and subtropical waters of the Atlantic, and have been reported from European seas, so the specimen may have been a vagrant or released from an aquarium. However, following on from media coverage (e.g. Eastern Daily Press, 21/09/05; Fishing News, 30/09/05), Cefas were informed that the specimen was a release from a tropical collection. Piranha Piranhas (Characiformes; Characidae; Serrasalminae) are widespread in South America, especially in the rivers and lakes associated with the Amazon, Orinoco and Paraná river basins (Fink, 1993). The sub-family Serrasalminae is represented by 13 genera and about 60 species (Nelson, 1994). The genus Pygocentrus is characterised by a robust head that is not elongated. A recent revision of the genus recognised three species (Fink, 1993). A dead specimen of piranha was found at Oulton Broad on 26 October 2005. The specimen (Plate 5) was 21Â5 cm in total length (17Â5 cm standard length) and 300 g in weight. The specimen was tentatively identified as Pygocentrus nattereri Kner (1860), given the absence of fin rays in the adipose fin (c.f. P. piraya) and the lack of a distinctive dark spot posterior to the operculum (c.f. P. cariba). It should be noted, however, that P. nattereri and P. cariba are morphologically very similar and colour patterns may vary considerably (Fink, 1993). P. nattereri can attain more than 30 cm in length and is one of the more popular species marketed in the tropical freshwater aquarium trade. This species can be aggressive with other fish and outgrow aquaria. This specimen was obviously introduced, though it is unclear as to how long the fish had persisted in the wild. Discussion Though both of these observations were of dead specimens, these findings illustrate that the deliberate release of tropical, ornamental fish occurs in the area. There are several reasons why aquarists might release exotic fish from private collections, including a large size, aggressive behaviour or disease (Copp et al., 2005b). Non-native fish species, if they manage to establish viable populations, can have adverse impacts populations of native species, especially in the case of piscivorous species, and there is also the possibility of introducing disease and parasites. Hence, the deliberate release of ornamental fish should be avoided. Both of the species released into the wild were tropical, and water temperatures will not have been suitable, at least in the long-term, for their survival. For example, laboratory studies of P. nattereri suggest that water temperatures need to be at least 14 ºC for them to predate on live fish, and though they may be able to over-winter at water temperatures of 10–12 ºC, they would not be able to over-winter at water temperatures of < 10 ºC (Bennet et al., 1997).

There have been many studies regarding non-native freshwater fishes, as many species have been transported in association with sport fisheries, pest control, aquaculture and the aquarium trade. Piranhas have established successful populations outside their range in South America following deliberate introductions (Latini and Petrere, 2004), and have also been reported from North America (Shafland, 1996; Bennett et al., 1997) and Hawaii (Radtke, 1995). There is less information on non-native marine fishes and their impacts on native ecosystems (Randall, 1987; Weigle et al., 2005). Though most tropical, ornamental fishes will fail to survive or establish viable populations if released in more temperate environments, there have been incidences along the Atlantic coast of North America in which released ornamental marine fish have survived (Semmens et al., 2004) and cases (e.g. lionfish Pterois volitans) that are thought to have resulted in the establishment of viable populations (Whitfield et al., 2002; Kimball et al., 2004). Another issue highlighted from the current observations is the identification of whether specimens of “exotic” fish are wild or ornamental. Though more likely a deliberate release, the incidence of porcupinefish could have been a freak natural occurrence, as they are known from the eastern Atlantic. However, in the present case, Cefas were notified that the fish had been released. Nevertheless, reliable techniques need to be developed (e.g. Radtke, 1995) for determining whether exotic marine fish have originated from natural or artificial sources, and how long they have been in the wild if released (e.g. using otolith microstructure and/or microchemistry). Acknowledgements Thanks to Alan McMurchie from Winterton Coastwatch for providing the specimen of porcupinefish, and the Harbour Office at Oulton Broad for providing the specimen of piranha. References Bennett, W. A., Currie, R. J., Wagner, P. F. & Beitinger, T. L. (1997). Cold tolerance and potential overwintering of the red-bellied piranha Pygocentrus nattereri in the United States. Transactions of the American Fisheries Society 126: 841–849. Carlton, J. T. (1985). Transoceanic and interoceanic dispersal of coastal marine organisms; the biology of ballast water. Oceanography and Marine Biology, An Annual Review 23: 313–371. Copp, G. H., Garthwaite, R. & Gozlan, R. E. (2005a). Risk identification and assessment of non-native freshwater fishes: a summary of concepts and perspectives on protocols for the UK. Journal of Applied Ichthyology 21: 371–373. Copp, G. H., Wesley, K. J. & Vilizzi, L. (2005b). Pathways of ornamental and aquarium fish introductions into urban ponds of Epping Forest (London, England): the human vector. Journal of Applied Ichthyology 21: 263–274. Courtenay, W. R. & Robins, C. R. (1973). Exotic aquatic organisms in Florida with emphasis on fishes: A review and recommendations. Transactions of the American Fisheries Society 102: 1–12.