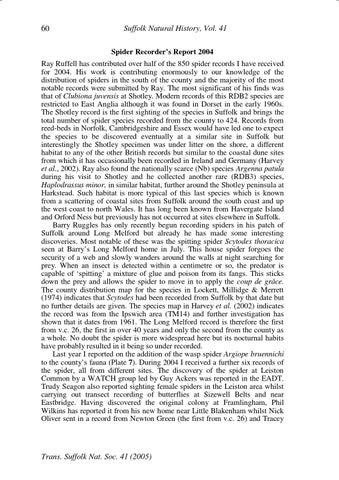 Ray Ruffell has contributed over half of the 850 spider records I have received for 2004. His work is contributing enormously to our knowledge of the distribution of spiders in the south of the county and the majority of the most notable records were submitted by Ray. The most significant of his finds was that of Clubiona juvensis at Shotley. Modern records of this RDB2 species are restricted to East Anglia although it was found in Dorset in the early 1960s. The Shotley record is the first sighting of the species in Suffolk and brings the total number of spider species recorded from the county to 424. Records from reed-beds in Norfolk, Cambridgeshire and Essex would have led one to expect the species to be discovered eventually at a similar site in Suffolk but interestingly the Shotley specimen was under litter on the shore, a different habitat to any of the other British records but similar to the coastal dune sites from which it has occasionally been recorded in Ireland and Germany (Harvey et al., 2002). Ray also found the nationally scarce (Nb) species Argenna patula during his visit to Shotley and he collected another rare (RDB3) species, Haplodrassus minor, in similar habitat, further around the Shotley peninsula at Harkstead. Such habitat is more typical of this last species which is known from a scattering of coastal sites from Suffolk around the south coast and up the west coast to north Wales. It has long been known from Havergate Island and Orford Ness but previously has not occurred at sites elsewhere in Suffolk. Barry Ruggles has only recently begun recording spiders in his patch of Suffolk around Long Melford but already he has made some interesting discoveries. Most notable of these was the spitting spider Scytodes thoracica seen at Barry’s Long Melford home in July. This house spider forgoes the security of a web and slowly wanders around the walls at night searching for prey. When an insect is detected within a centimetre or so, the predator is capable of ‘spitting’ a mixture of glue and poison from its fangs. This sticks down the prey and allows the spider to move in to apply the coup de grâce. The county distribution map for the species in Lockett, Millidge & Merrett (1974) indicates that Scytodes had been recorded from Suffolk by that date but no further details are given. The species map in Harvey et al. (2002) indicates the record was from the Ipswich area (TM14) and further investigation has shown that it dates from 1961. The Long Melford record is therefore the first from v.c. 26, the first in over 40 years and only the second from the county as a whole. No doubt the spider is more widespread here but its nocturnal habits have probably resulted in it being so under recorded. Last year I reported on the addition of the wasp spider Argiope bruennichi to the county’s fauna (Plate 7). During 2004 I received a further six records of the spider, all from different sites. The discovery of the spider at Leiston Common by a WATCH group led by Guy Ackers was reported in the EADT. Trudy Seagon also reported sighting female spiders in the Leiston area whilst carrying out transect recording of butterflies at Sizewell Belts and near Eastbridge. Having discovered the original colony at Framlingham, Phil Wilkins has reported it from his new home near Little Blakenham whilst Nick Oliver sent in a record from Newton Green (the first from v.c. 26) and Tracey

Gunn reported it from Hollesley. This latter record arrived with me via the Essex Field Club website which invites the general public to submit their sightings of a range of some of the more easily identified wildlife. The increase in Suffolk sightings mirrors the national expansion of this spider and more records can be expected in 2005. Two males of the nationally scarce (Nb) species Nigma puella were beaten from shrubs at Higham in June by Ray Ruffell. In East Anglia the spider appears to be restricted to a coastal zone, no more than 30 km wide, running north through Essex and into south Suffolk. The spiders from Higham constitute a new record for v.c. 26 and are on the very northern edge of the known range of the species in Britain. Other records of nationally scarce species in 2004 include the crab spider Philodromus collinus which is normally associated with conifer woodlands. This was collected from Sutton Common in May by Colin Plant. Forestry activities in the past have provided suitable habitat for this species in Suffolk but plans to convert the maturing plantations back to Sandlings heath are likely to lead to a decline in this spider. Also in May, the nationally scarce (Nb) orb-web spider Araniella inconspicua was collected at Shingle Street by Julian Thompson. This record illustrates the importance of the FSC’s courses at Flatford Mill in generating records from the local area as well as in training naturalists. Julian attended a series of three weekend courses at Flatford as part of his MSc studies with the University of Birmingham. During these sessions he developed an interest in spiders and contributed over 50 Suffolk records from the specimens which he later identified. Again, Stan Dumican has sent in a large number of records from his work in v.c. 26. Most notable of these were five records of the large jumping spider Marpissa muscosa. Stan’s work suggests that this nationally scarce spider has a stronghold in the Elveden area despite this being another species on the northern edge of its known distribution range in Suffolk. A record of the crab spider Misumena vatia from his Sicklesmere garden in November was also noteworthy and he reports that Uloborus plumipes is still present at the Wyevale Garden Centre in Bury St Edmunds. A species recorded for the first time from Britain was discovered in July at Felixstowe Docks by Emma Costello of Igrox Ltd. It had been imported in a container from Angola which had been fumigated on the discovery of the spiders. The spider Artema atlanta is a well known tramp species and has been found on all the continents with the exception of Antarctica but has not been noted previously on British soil. Its closest relative in the native British fauna is the daddy long legs spider Pholcus phalangioides. Another imported species recorded from Suffolk in 2004 was the jumping spider Philaeus chrysops (Plate 8). The very noticeable scarlet and black male was spotted by the staff at a plant nursery at Coney Weston in June. They called Tony Irwin at Norwich Museum who immediately drove down to identify and photograph the spider. It is likely to have been introduced to the nursery along with plant stocks from Italy and, as so much stock is being imported now, Philaeus chrysops is likely to turn up at further garden centres and nurseries across the county in future.

Other Arthropods Recorderâ&#x20AC;&#x2122;s Report 2004 Most of the interesting records of arthropods other than insects were generated during the range of invertebrate identification courses held at Flatford Mill over the course of 2004. All of these courses involved an element of field work and some sites within easy travelling distance of Flatford were visited by groups of approximately 12 students on a number of occasions. Such intensive work at the National Trustâ&#x20AC;&#x2122;s Cliff Plantation at Pin Mill, Chelmondiston resulted in the discovery in May of another site for the nationally scarce (Nb) woodlouse, Miktoniscus patiencei. This tiny white animal is a coastal species usually found on saltmarshes or around the high tide level on beaches. At Pin Mill it was found under drift wood on the shore at the edge of the woodland by David Lambert. David was attending the last of a series of three weekend courses at Flatford as part of his MSc studies with the University of Birmingham. During this same May weekend, Stuart Coleman, another of the MSc students discovered the provisional Red Data Book (RDBK) centipede Lithobius lapidicola at Shingle Street. Other than the original British record from Kent, all of the other nine outdoor sightings of this centipede in Britain have occurred in Suffolk. This record further establishes the Suffolk coast as the UK stronghold of Lithobius lapidicola. During 2004 there were no observations of millipedes worthy of further comment. As was reported last year, there has been a significant increase in the number of recent observations of the harvestman Dicranopalpus ramosus in Suffolk. There were two more records in 2004. John Digby sent me a record from Sycamore Farm, Swilland and I collected the species during the SNS field meeting at Spring Wood, Ipswich. This harvestman has spread from the south coast (it was first discovered at Bournemouth in 1957) in much the same way that other invertebrates such as the Wasp Spider, Argiope bruennichi, have done in recent years. Paul Lee Oakdene The Heath Tattingstone Ipswich IP9 2LX