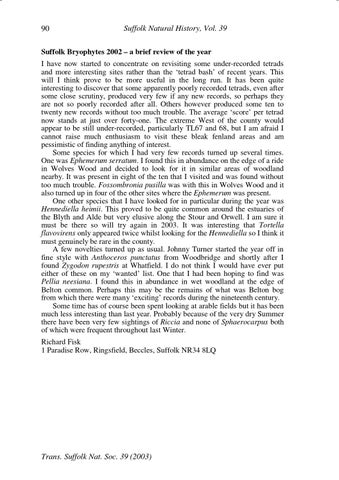 Suffolk Bryophytes 2002 – a brief review of the year I have now started to concentrate on revisiting some under-recorded tetrads and more interesting sites rather than the ‘tetrad bash’ of recent years. This will I think prove to be more useful in the long run. It has been quite interesting to discover that some apparently poorly recorded tetrads, even after some close scrutiny, produced very few if any new records, so perhaps they are not so poorly recorded after all. Others however produced some ten to twenty new records without too much trouble. The average ‘score’ per tetrad now stands at just over forty-one. The extreme West of the county would appear to be still under-recorded, particularly TL67 and 68, but I am afraid I cannot raise much enthusiasm to visit these bleak fenland areas and am pessimistic of finding anything of interest. Some species for which I had very few records turned up several times. One was Ephemerum serratum. I found this in abundance on the edge of a ride in Wolves Wood and decided to look for it in similar areas of woodland nearby. It was present in eight of the ten that I visited and was found without too much trouble. Fossombronia pusilla was with this in Wolves Wood and it also turned up in four of the other sites where the Ephemerum was present. One other species that I have looked for in particular during the year was Hennediella heimii. This proved to be quite common around the estuaries of the Blyth and Alde but very elusive along the Stour and Orwell. I am sure it must be there so will try again in 2003. It was interesting that Tortella flavovirens only appeared twice whilst looking for the Hennediella so I think it must genuinely be rare in the county. A few novelties turned up as usual. Johnny Turner started the year off in fine style with Anthoceros punctatus from Woodbridge and shortly after I found Zygodon rupestris at Whatfield. I do not think I would have ever put either of these on my ‘wanted’ list. One that I had been hoping to find was Pellia neesiana. I found this in abundance in wet woodland at the edge of Belton common. Perhaps this may be the remains of what was Belton bog from which there were many ‘exciting’ records during the nineteenth century. Some time has of course been spent looking at arable fields but it has been much less interesting than last year. Probably because of the very dry Summer there have been very few sightings of Riccia and none of Sphaerocarpus both of which were frequent throughout last Winter. Richard Fisk 1 Paradise Row, Ringsfield, Beccles, Suffolk NR34 8LQ

Suffolk Bryophytes 2002 – a brief review of the year

Suffolk Bryophytes 2002 – a brief review of the year