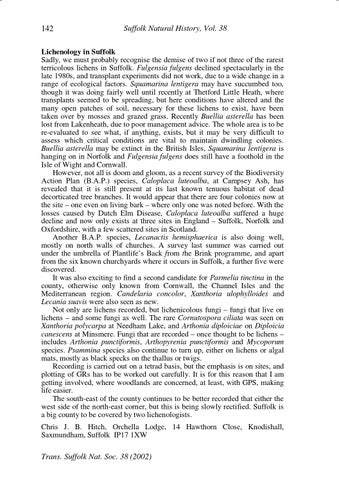 Lichenology in Suffolk Sadly, we must probably recognise the demise of two if not three of the rarest terricolous lichens in Suffolk. Fulgensia fulgens declined spectacularly in the late 1980s, and transplant experiments did not work, due to a wide change in a range of ecological factors. Squamarina lentigera may have succumbed too, though it was doing fairly well until recently at Thetford Little Heath, where transplants seemed to be spreading, but here conditions have altered and the many open patches of soil, necessary for these lichens to exist, have been taken over by mosses and grazed grass. Recently Buellia asterella has been lost from Lakenheath, due to poor management advice. The whole area is to be re-evaluated to see what, if anything, exists, but it may be very difficult to assess which critical conditions are vital to maintain dwindling colonies. Buellia asterella may be extinct in the British Isles, Squamarina lentigera is hanging on in Norfolk and Fulgensia fulgens does still have a foothold in the Isle of Wight and Cornwall. However, not all is doom and gloom, as a recent survey of the Biodiversity Action Plan (B.A.P.) species, Caloplaca luteoalba, at Campsey Ash, has revealed that it is still present at its last known tenuous habitat of dead decorticated tree branches. It would appear that there are four colonies now at the site – one even on living bark – where only one was noted before. With the losses caused by Dutch Elm Disease, Caloplaca luteoalba suffered a huge decline and now only exists at three sites in England – Suffolk, Norfolk and Oxfordshire, with a few scattered sites in Scotland. Another B.A.P. species, Lecanactis hemisphaerica is also doing well, mostly on north walls of churches. A survey last summer was carried out under the umbrella of Plantlife’s Back from the Brink programme, and apart from the six known churchyards where it occurs in Suffolk, a further five were discovered. It was also exciting to find a second candidate for Parmelia tinctina in the county, otherwise only known from Cornwall, the Channel Isles and the Mediterranean region. Candelaria concolor, Xanthoria ulophylloides and Lecania suavis were also seen as new. Not only are lichens recorded, but lichenicolous fungi – fungi that live on lichens – and some fungi as well. The rare Cornutospora ciliata was seen on Xanthoria polycarpa at Needham Lake, and Arthonia diploiciae on Diploicia canescens at Minsmere. Fungi that are recorded – once thought to be lichens – includes Arthonia punctiformis, Arthopyrenia punctiformis and Mycoporum species. Psammina species also continue to turn up, either on lichens or algal mats, mostly as black specks on the thallus or twigs. Recording is carried out on a tetrad basis, but the emphasis is on sites, and plotting of GRs has to be worked out carefully. It is for this reason that I am getting involved, where woodlands are concerned, at least, with GPS, making life easier. The south-east of the county continues to be better recorded that either the west side of the north-east corner, but this is being slowly rectified. Suffolk is a big county to be covered by two lichenologists. Chris J. B. Hitch, Orchella Lodge, 14 Hawthorn Close, Knodishall, Saxmundham, Suffolk IP17 1XW