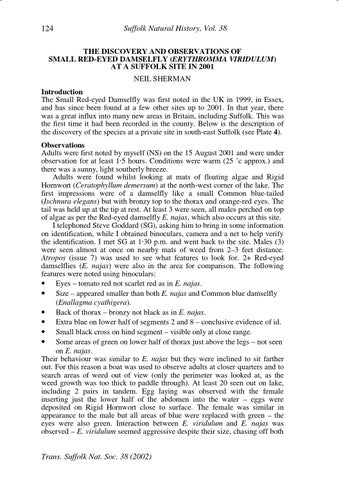 THE DISCOVERY AND OBSERVATIONS OF SMALL RED-EYED DAMSELFLY (ERYTHROMMA VIRIDULUM) AT A SUFFOLK SITE IN 2001 NEIL SHERMAN Introduction The Small Red-eyed Damselfly was first noted in the UK in 1999, in Essex, and has since been found at a few other sites up to 2001. In that year, there was a great influx into many new areas in Britain, including Suffolk. This was the first time it had been recorded in the county. Below is the description of the discovery of the species at a private site in south-east Suffolk (see Plate 4). Observations Adults were first noted by myself (NS) on the 15 August 2001 and were under observation for at least 1·5 hours. Conditions were warm (25 ˚c approx.) and there was a sunny, light southerly breeze. Adults were found whilst looking at mats of floating algae and Rigid Hornwort (Ceratophyllum demersum) at the north-west corner of the lake. The first impressions were of a damselfly like a small Common blue-tailed (Ischnura elegans) but with bronzy top to the thorax and orange-red eyes. The tail was held up at the tip at rest. At least 3 were seen, all males perched on top of algae as per the Red-eyed damselfly E. najas, which also occurs at this site. I telephoned Steve Goddard (SG), asking him to bring in some information on identification, while I obtained binoculars, camera and a net to help verify the identification. I met SG at 1·30 p.m. and went back to the site. Males (3) were seen almost at once on nearby mats of weed from 2–3 feet distance. Atropos (issue 7) was used to see what features to look for. 2+ Red-eyed damselflies (E. najas) were also in the area for comparison. The following features were noted using binoculars: • Eyes – tomato red not scarlet red as in E. najas. • Size – appeared smaller than both E. najas and Common blue damselfly (Enallagma cyathigera). • Back of thorax – bronzy not black as in E. najas. • Extra blue on lower half of segments 2 and 8 – conclusive evidence of id. • Small black cross on hind segment – visible only at close range. • Some areas of green on lower half of thorax just above the legs – not seen on E. najas. Their behaviour was similar to E. najas but they were inclined to sit farther out. For this reason a boat was used to observe adults at closer quarters and to search areas of weed out of view (only the perimeter was looked at, as the weed growth was too thick to paddle through). At least 20 seen out on lake, including 2 pairs in tandem. Egg laying was observed with the female inserting just the lower half of the abdomen into the water – eggs were deposited on Rigid Hornwort close to surface. The female was similar in appearance to the male but all areas of blue were replaced with green – the eyes were also green. Interaction between E. viridulum and E. najas was observed – E. viridulum seemed aggressive despite their size, chasing off both

NOTES ON SMALL THE SUFFOLK RED-EYEDLIST DAMSELFLY OF COLEOPTERA

E. najas and Enallagma cyathigera before returning to their perches. Males were often seen swapping positions on a weed mat with the slightly raised areas above the surface being favoured. A voucher specimen was netted, placed in a clear glass tube and examined in detail – all the features listed above were noted including close views of the cross mark on the final segment, also 2 pale stripes down the thorax not seen previously. Several photos were taken for record purposes. A search of all easily visible mats of weed on 17th produced a count of 41, with 2 pairs mating in wheel formation also observed. 1 E. najas also seen. Conditions were warm, dry and sunny but with a brisk Easterly wind. 39 were found on 20th, including 8 pairs in tandem, some being observed in the mating wheel. There was a light southwesterly breeze and warm sunshine. 42 (all males) were counted on 21st, in the company of Arthur Watchman who also confirmed the identification. This was the highest oneday count of individuals from the bank. 12 males and 1 pair were seen during a quick search on the 23rd, still on the same area of the lake. There were at least 4 pairs on the 27th, along with a few odd males. Egg laying into the weed patches was again observed. Adults were still present on the 31st, when there were still 20 single males and 3 pairs. A spell of bad weather after this meant that no more were seen after that date. In all cases where adults were counted, many more must have been present, as all the weed patches could not be seen from the shore. The future It will be interesting to see in 2002 if the species establishes a breeding colony at the site. With the presence of egg laying females in 2001 this is possible, but conclusive proof even if the adults appear again would be required. This would be in the form of either exuviae (hatched nymph skins) or observations of teneral (freshly emerged) individuals. Searches for this evidence will hopefully go ahead, if the adults reappear again. Due to the fact that some private sites where this species occurs in the UK have been accessed without permission, this site will remain confidential. See Macklin (2001) for another sighting of this species in Suffolk [Ed.]. References Brooks, S. (1997). Field Guide to the Dragonflies and Damselflies of Great Britain and Ireland. Cham, S. (2000). Identification of Red eyed damselflies. British Wildlife 11: 324–326. Dewick, S & Gerusssi, R. (2000). Small Red Eyed Damselfly Erythromma viridulum (Charp.) Found Breeding in Essex. Atropos 9: 3–4. Gibbons, B. (1986). Hamlyn Guide Dragonflies and Damselflies of Britain and Northern Europe. Macklin, R. (2001). Small Red-eyed Damselflies (Erythomma viridulum) in Suffolk. White Admiral 50: 11 Wasscher, M., (1999). Identification of Small Red Eyed Damselfly Erythromma viridulum (Charp.) Atropos 7: 7–9 Neil Sherman 98, Dover Road, Ipswich, Suffolk IP3 8JH