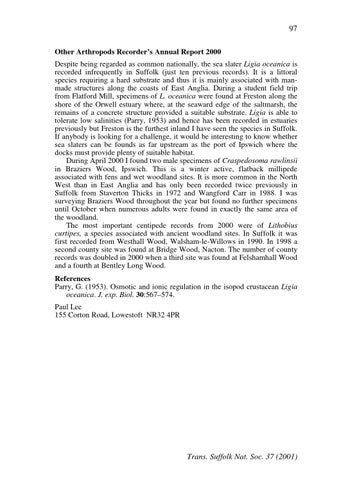 Other Arthropods Recorderâ&#x20AC;&#x2122;s Annual Report 2000 Despite being regarded as common nationally, the sea slater Ligia oceanica is recorded infrequently in Suffolk (just ten previous records). It is a littoral species requiring a hard substrate and thus it is mainly associated with manmade structures along the coasts of East Anglia. During a student field trip from Flatford Mill, specimens of L. oceanica were found at Freston along the shore of the Orwell estuary where, at the seaward edge of the saltmarsh, the remains of a concrete structure provided a suitable substrate. Ligia is able to tolerate low salinities (Parry, 1953) and hence has been recorded in estuaries previously but Freston is the furthest inland I have seen the species in Suffolk. If anybody is looking for a challenge, it would be interesting to know whether sea slaters can be founds as far upstream as the port of Ipswich where the docks must provide plenty of suitable habitat. During April 2000 I found two male specimens of Craspedosoma rawlinsii in Braziers Wood, Ipswich. This is a winter active, flatback millipede associated with fens and wet woodland sites. It is more common in the North West than in East Anglia and has only been recorded twice previously in Suffolk from Staverton Thicks in 1972 and Wangford Carr in 1988. I was surveying Braziers Wood throughout the year but found no further specimens until October when numerous adults were found in exactly the same area of the woodland. The most important centipede records from 2000 were of Lithobius curtipes, a species associated with ancient woodland sites. In Suffolk it was first recorded from Westhall Wood, Walsham-le-Willows in 1990. In 1998 a second county site was found at Bridge Wood, Nacton. The number of county records was doubled in 2000 when a third site was found at Felshamhall Wood and a fourth at Bentley Long Wood. References Parry, G. (1953). Osmotic and ionic regulation in the isopod crustacean Ligia oceanica. J. exp. Biol. 30:567â&#x20AC;&#x201C;574. Paul Lee 155 Corton Road, Lowestoft NR32 4PR