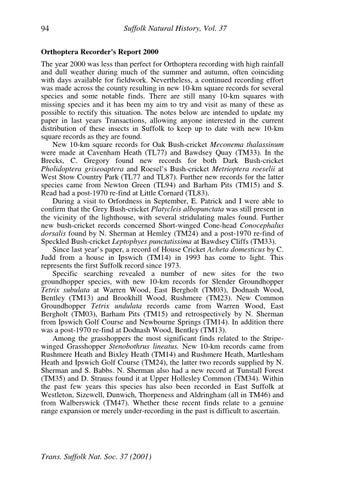 Orthoptera Recorder's Report 2000 The year 2000 was less than perfect for Orthoptera recording with high rainfall and dull weather during much of the summer and autumn, often coinciding with days available for fieldwork. Nevertheless, a continued recording effort was made across the county resulting in new 10-km square records for several species and some notable finds. There are still many 10-km squares with missing species and it has been my aim to try and visit as many of these as possible to rectify this situation. The notes below are intended to update my paper in last years Transactions, allowing anyone interested in the current distribution of these insects in Suffolk to keep up to date with new 10-km square records as they are found. New 10-km square records for Oak Bush-cricket Meconema thalassinum were made at Cavenham Heath (TL77) and Bawdsey Quay (TM33). In the Brecks, C. Gregory found new records for both Dark Bush-cricket Pholidoptera griseoaptera and Roeselâ&#x20AC;&#x2122;s Bush-cricket Metrioptera roeselii at West Stow Country Park (TL77 and TL87). Further new records for the latter species came from Newton Green (TL94) and Barham Pits (TM15) and S. Read had a post-1970 re-find at Little Cornard (TL83). During a visit to Orfordness in September, E. Patrick and I were able to confirm that the Grey Bush-cricket Platycleis albopunctata was still present in the vicinity of the lighthouse, with several stridulating males found. Further new bush-cricket records concerned Short-winged Cone-head Conocephalus dorsalis found by N. Sherman at Hemley (TM24) and a post-1970 re-find of Speckled Bush-cricket Leptophyes punctatissima at Bawdsey Cliffs (TM33). Since last yearâ&#x20AC;&#x2122;s paper, a record of House Cricket Acheta domesticus by C. Judd from a house in Ipswich (TM14) in 1993 has come to light. This represents the first Suffolk record since 1973. Specific searching revealed a number of new sites for the two groundhopper species, with new 10-km records for Slender Groundhopper Tetrix subulata at Warren Wood, East Bergholt (TM03), Dodnash Wood, Bentley (TM13) and Brookhill Wood, Rushmere (TM23). New Common Groundhopper Tetrix undulata records came from Warren Wood, East Bergholt (TM03), Barham Pits (TM15) and retrospectively by N. Sherman from Ipswich Golf Course and Newbourne Springs (TM14). In addition there was a post-1970 re-find at Dodnash Wood, Bentley (TM13). Among the grasshoppers the most significant finds related to the Stripewinged Grasshopper Stenobothrus lineatus. New 10-km records came from Rushmere Heath and Bixley Heath (TM14) and Rushmere Heath, Martlesham Heath and Ipswich Golf Course (TM24), the latter two records supplied by N. Sherman and S. Babbs. N. Sherman also had a new record at Tunstall Forest (TM35) and D. Strauss found it at Upper Hollesley Common (TM34). Within the past few years this species has also been recorded in East Suffolk at Westleton, Sizewell, Dunwich, Thorpeness and Aldringham (all in TM46) and from Walberswick (TM47). Whether these recent finds relate to a genuine range expansion or merely under-recording in the past is difficult to ascertain.

Amongst the other grasshoppers there were new records for Field Grasshopper Chorthippus brunneus at Newton Green and Great Waldingfield (TL94), Mendlesham Green (TM16) and Brundish (TM26). In addition, a record from Peasenhall (TM36) in 1992 was omitted from last year’s report. The Meadow Grasshopper Chorthippus parallelus was found at Fakenham Magna (TL97) and there was a post-1970 re-find at Shingle Street (TM34) by E. Patrick. A record from Benhall (TM36) in 1995 by D. Strauss was accidentally omitted from last year’s report. There were two new 10-km square records for Mottled Grasshopper Myrmeleotettix maculatus, at Fakenham Magna (TL97) and Orfordness (TM44). The only cockroach report during the year came from S. Massey who found a thriving colony of Lesser Cockroach Ectobius panzeri on the beach at Sizewell (TM46), the first record from that parish for nearly seventy years. Finally, the most notable record of the year concerned the male Lesne’s Earwig Forficula lesnei I discovered along the disused railway line at Clare Country Park in August. This represents only the fifth county record and the first since 1931. Interestingly, three of the previous records were from a similar area around the River Stour, at Sudbury in 1923 and 1931 and Stokeby-Nayland in 1916. In addition to these records, Claude Morley took a specimen at Gisleham in 1922 and there was an unconfirmed report from Hundon in about 1970. I am sure that further searching will reveal more records for Lesne’s Earwig since it is an unobtrusive insect and prone to under-recording. The Clare specimen was found during a systematic search of the flower heads of Wild Carrot and it was the only confirmed specimen amongst a total of more than thirty Common Earwigs Forficula auricularia. In summary, 2000 produced a number of valuable new records, but there are still large parts of Suffolk that have never been searched for Orthoptera. I would like to reiterate my request in last year’s Transactions for any records of Orthoptera that readers of this article come across, even for common species such as Dark Bush-cricket, Field Grasshopper and Common Earwig. My thanks go to S. Babbs, C. Gregory, S. Massey, E. Patrick, N. Sherman and D. Strauss for sending me details of their observations during the year. I hope this article will stimulate others to keep an eye open for this fascinating, but under-recorded group of insects. Stuart Ling 4 Oxford Road, Ipswich IP4 1NL