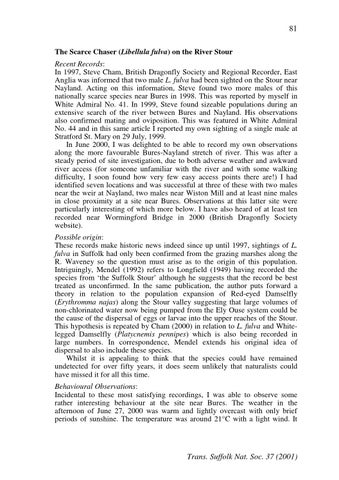 The Scarce Chaser (Libellula fulva) on the River Stour Recent Records: In 1997, Steve Cham, British Dragonfly Society and Regional Recorder, East Anglia was informed that two male L. fulva had been sighted on the Stour near Nayland. Acting on this information, Steve found two more males of this nationally scarce species near Bures in 1998. This was reported by myself in White Admiral No. 41. In 1999, Steve found sizeable populations during an extensive search of the river between Bures and Nayland. His observations also confirmed mating and oviposition. This was featured in White Admiral No. 44 and in this same article I reported my own sighting of a single male at Stratford St. Mary on 29 July, 1999. In June 2000, I was delighted to be able to record my own observations along the more favourable Bures-Nayland stretch of river. This was after a steady period of site investigation, due to both adverse weather and awkward river access (for someone unfamiliar with the river and with some walking difficulty, I soon found how very few easy access points there are!) I had identified seven locations and was successful at three of these with two males near the weir at Nayland, two males near Wiston Mill and at least nine males in close proximity at a site near Bures. Observations at this latter site were particularly interesting of which more below. I have also heard of at least ten recorded near Wormingford Bridge in 2000 (British Dragonfly Society website). Possible origin: These records make historic news indeed since up until 1997, sightings of L. fulva in Suffolk had only been confirmed from the grazing marshes along the R. Waveney so the question must arise as to the origin of this population. Intriguingly, Mendel (1992) refers to Longfield (1949) having recorded the species from ‘the Suffolk Stour’ although he suggests that the record be best treated as unconfirmed. In the same publication, the author puts forward a theory in relation to the population expansion of Red-eyed Damselfly (Erythromma najas) along the Stour valley suggesting that large volumes of non-chlorinated water now being pumped from the Ely Ouse system could be the cause of the dispersal of eggs or larvae into the upper reaches of the Stour. This hypothesis is repeated by Cham (2000) in relation to L. fulva and Whitelegged Damselfly (Platycnemis pennipes) which is also being recorded in large numbers. In correspondence, Mendel extends his original idea of dispersal to also include these species. Whilst it is appealing to think that the species could have remained undetected for over fifty years, it does seem unlikely that naturalists could have missed it for all this time. Behavioural Observations: Incidental to these most satisfying recordings, I was able to observe some rather interesting behaviour at the site near Bures. The weather in the afternoon of June 27, 2000 was warm and lightly overcast with only brief periods of sunshine. The temperature was around 21°C with a light wind. It

was my first visit to this particularly promising stretch of river which meandered below a steep bank adjacent to a field of crops. As I approached the site no dragonflies were in flight but then several L. fulva began to fly up from the ground and away over the field. Some soon returning to what appeared to be the same perches of short cut stalks on a mown ‘path’ which formed a straw-like bed on the ground at the edge of the crop. It seemed that the insects, which were in fairly close proximity, were basking on this layer taking advantage of the extra warmth and shelter provided close to the ground as they only flew up on being accidentally disturbed by myself. They appeared to be ignoring the bank-side vegetation. I counted nine mature males along with two Black-tailed Skimmer (Orthetrum cancellatum) which were behaving in the same way. However, this was probably an under-estimate in view of the comings and goings due to my presence. Acknowledgements I would like to thank Steve Cham for informing me of his own and the first sighting of L. fulva on the R. Stour. References Mendel, H. (1992). Suffolk Dragonflies. Suffolk Naturalists’ Society, Ipswich. Cham, S. (2000). Discovery of a ‘new’ population of the Scarce Chaser Libellula fulva Muller on the River Stour in the Dedham Vale. Journal of the British Dragonfly Society, 16: 17–19. Steve Goddard 47 Colchester Road, Ipswich IP4 3BT

The Scarce Chaser (Libellula fulva) on the River Stour

The Scarce Chaser (Libellula fulva) on the River Stour