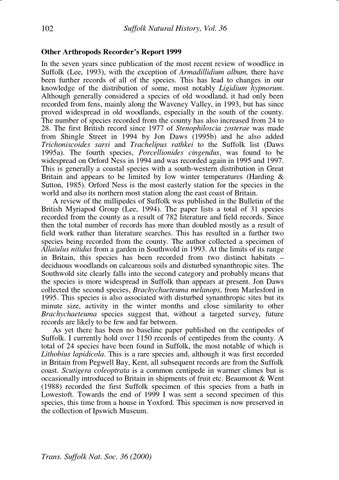 Other Arthropods Recorderâ&#x20AC;&#x2122;s Report 1999 In the seven years since publication of the most recent review of woodlice in Suffolk (Lee, 1993), with the exception of Armadillidium album, there have been further records of all of the species. This has lead to changes in our knowledge of the distribution of some, most notably Ligidium hypnorum. Although generally considered a species of old woodland, it had only been recorded from fens, mainly along the Waveney Valley, in 1993, but has since proved widespread in old woodlands, especially in the south of the county. The number of species recorded from the county has also increased from 24 to 28. The first British record since 1977 of Stenophiloscia zosterae was made from Shingle Street in 1994 by Jon Daws (1995b) and he also added Trichoniscoides sarsi and Trachelipus rathkei to the Suffolk list (Daws 1995a). The fourth species, Porcellionides cingendus, was found to be widespread on Orford Ness in 1994 and was recorded again in 1995 and 1997. This is generally a coastal species with a south-western distribution in Great Britain and appears to be limited by low winter temperatures (Harding & Sutton, 1985). Orford Ness is the most easterly station for the species in the world and also its northern most station along the east coast of Britain. A review of the millipedes of Suffolk was published in the Bulletin of the British Myriapod Group (Lee, 1994). The paper lists a total of 31 species recorded from the county as a result of 782 literature and field records. Since then the total number of records has more than doubled mostly as a result of field work rather than literature searches. This has resulted in a further two species being recorded from the county. The author collected a specimen of Allaiulus nitidus from a garden in Southwold in 1993. At the limits of its range in Britain, this species has been recorded from two distinct habitats â&#x20AC;&#x201C; deciduous woodlands on calcareous soils and disturbed synanthropic sites. The Southwold site clearly falls into the second category and probably means that the species is more widespread in Suffolk than appears at present. Jon Daws collected the second species, Brachychaeteuma melanops, from Marlesford in 1995. This species is also associated with disturbed synanthropic sites but its minute size, activity in the winter months and close similarity to other Brachychaeteuma species suggest that, without a targeted survey, future records are likely to be few and far between. As yet there has been no baseline paper published on the centipedes of Suffolk. I currently hold over 1150 records of centipedes from the county. A total of 24 species have been found in Suffolk, the most notable of which is Lithobius lapidicola. This is a rare species and, although it was first recorded in Britain from Pegwell Bay, Kent, all subsequent records are from the Suffolk coast. Scutigera coleoptrata is a common centipede in warmer climes but is occasionally introduced to Britain in shipments of fruit etc. Beaumont & Went (1988) recorded the first Suffolk specimen of this species from a bath in Lowestoft. Towards the end of 1999 I was sent a second specimen of this species, this time from a house in Yoxford. This specimen is now preserved in the collection of Ipswich Museum.