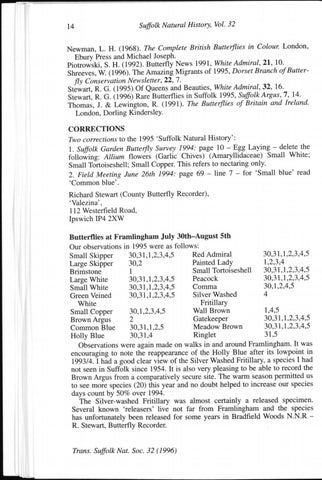 reported an overall quiet season with probably more resident species showing a decline in numbers rather than an increase. Do please send any records of moths to either the county recorder, Arthur Watchman, Onchan, Back Lane, Monks Eleigh, Suffolk, IP7 7BA, or to the Suffolk Biological Records Centre, c/o The Museum, High Street, Ipswich IP1 3QH, as everything helps to determine the status of moths within the county. Acknowledgements I am most grateful to Alasdair Aston (AA) for the time and effort he has put into searching the literature for previous records of those species that have been claimed as new county records in these notes and for his records of Suffolk sightings in 1995. I also thank all the recorders whose records and notes have helped to compiled this report: Charlotte Anderson (CA), Maggie Brooks (MB), Stan Dumican (SD), Jim Foster (JF), A. F. Fry (AF), Mr. Garnham (Mr. G.), Steve Goddard (SG), Roger Kendrick (RK), G. Knight (GK), H. Leggett (HL), Stuart Ling (SL), Rob Macklin (RM), Audrey Morgan (AM), Norman Muddeman (NM), Jon Nicholls (JN), Steve Noye (SN), Nigel Odin and Mike Marsh (NO), Caroline Peacock (CP), Janet Revett (JR), Reg Snook (RSn), R. Stobo (RSt), W. Talbot (WT). C. Thompson (CT) and in particular Rafe Eley (RE), Adrian Parr (AP) and Arthur Watchman (AW) whose additional comments on numbers and fluctuations have helped to give the picture of the overall status of moths in Suffolk at the present day. M. R. Hall (MH), Hopefield, Norwich Road, Scole, Diss IP21 4DY.

White-point Moth, Mythimna albipuncta D. & S., in 1995 This year I was pleased to note a specimen of the White-point Moth, which had flown to light at Market Hill, Framlingham, on August Ist. The moth was in good condition and reminded me of evenings in the 1940s when I worked reedflowers in the now departed osier-beds to the west of Stowmarket. The species is immigrant and had not been noted in Suffolk from its discovery at Hemley in 1902 until 1938 when C. Garrett-Jones found it at Iken. From the 1940s onwards it was observed regularly but mainly in eastern localities: Foxhall, Martlesham, Bosmere, Belstead, Southwold, Walberswick, Aldeburgh, Staverton and Waldringfield. The last record I can find in the Transactions dates from Needham Market in 1968. There must, surely, have been occurrences in the interim? Alasdair Aston

Some infrequent Microlepidoptera Among the micros that flew to light at Market Hill, Framlingham, this summer was an attractive black and cream species (August 4th), which Dr. J. Langmaid has kindly named for me as Mompha propinquella Stt. Robert Palmer (pers. comm.) also noted it at Santon Downham in 1987-89 and these records for East and West Suffolk are probably the first for over 60 years. Dichrorampha flavidorsana Knaggs, a distinctly local species, arrived on July 3Ist: the only other Suffolk record dates from 1934. Epiblema cirsiana Zell, flew in on July 3Ist. The first definite Suffolk specimen (1948) was identified for me by Mr. S. Wakely (see Transactions 11, 144). Alasdair Aston

Ranatra Linearis - In Flight! I have been recording Ranatra linearis, the Water Stick Insect, for many years; yet have never seen one in flight. The question as to whether this aquatic bug can fly is puzzling. Many references suggest that Ranatra cannot fly, despite having small wings. I myself have never accepted that this is the case nor that the allied species Nepa cinerea is flightless. The Field Guide to Insects by Michael Chinery, for example, states that 'Both species are winged but cannot fly as the flight muscles are poorly developed'. Some other works echo this or simply do not mention flight. The question has now been answered by a fascinating piece of Observation by SNS member Joan Hardingham. Whilst working on the strawberry crop at her farm near Needham Market on 7th of June 1996 she saw a specimen of Ranatra linearis fly across the field and land on some black plastic sheeting, presumably mistaking it for the reflective surface of a pond. She reported to me that its wings were of a 'russety' colour and rather like an earwig's. It flew holding its body at an angle of about 60째 to the horizontal and she feit that it resembled a praying mantis in flight. When it took off again it did so vertically, was certainly less ungainly than a cranefly, indeed she described it as quite a strong flier. The Observation is all the more remarkable if you consider the weather conditions on June 7th. This was one of the hottest days of the year reaching 31째C and the insect was seen flying at 11 am, almost the hottest period of the day. The evening saw quite violent thunderstorms over much of the country at the end of a 72-hour period of falling air pressure. Many other aquatic bugs of course are caught in light traps because they fly at night, when the air is cooler and more moist, but this specimen seemed content in the heat. Did the impending thunder, the drop in air pressure or the heat trigger it's flight? It is said that Gerris, the pondskaters, overwinter as fully winged forms but the summer population reabsorb their wing muscles, perhaps to increase the available protein for egg production (Gutherie, 1989). Was Joan's specimen dispersing prior to egg laying? Another piece of research (Savage, 1989) suggests there is evidence that temperatures over 24째C may trigger the development of f체ll wing muscles in the Corroxid bug Sigara scotti. Perhaps the high temperatures that week led to it taking flight? As usual in Natural History, the more you find out, the more questions there are to answer. I would very much appreciate any observations members might have on this matter, especially if they have seen Ranatra fly. References Gutherie, M., (1989). Animals of the surface film-, 24. Naturalist's Handbooks No. 12. Richmond Publishing Co. Ltd., Slough. Savage, A. A., (1989). Adults of the British Aquatic Hemiptera Heteroptera\ 153. Scientific Publication No. 50. Freshwater Biological Association, Ambleside. A. K. Chalkley

Yellow Archangel with variegated leaves Lamiastrum Galeobdolon ssp. Argentatum DĂźring the past 25 years there has been a considerable spread of the Yellow Archangel with white markings or blotches on its leaves. Little is known of the origin of this form. Some botanists regard it as a separate species. It is certainly a more vigorous and aggressive plant and will grow in habitats where the usual Suffolk plants, L. galeobdolon ssp. montanum, never occurred or would be unlike to survive. It withstood the drought of 1995 much better. It also hybridises freely, but the hybrids are difficult or almost impossible to identify. In years to come this subspecies or its hybrids are likely to become common plants of many woods, lanes and various other habitats. Now a frequent garden plant it will soon extend its boundaries naturally or by thrown-away specimens. Records 1974 1976 1981 1984 1989 1991 1992