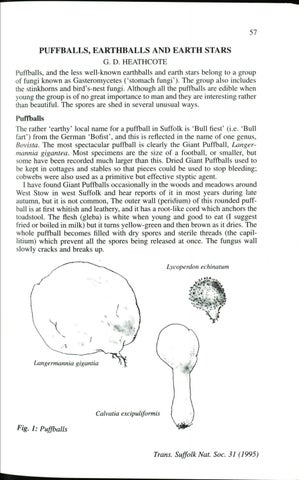 PUFFBALLS, EARTHBALLS AND EARTH STARS G. D. HEATHCOTE Puffballs, and the less well-known earthballs and earth stars belong to a group of fungi known as Gasteromycetes ('stomach fungi'). The group also includes the stinkhorns and bird's-nest fungi. Although all the puffballs are edible when young the group is of no great importance to man and they are interesting rather than beautiful. The spores are shed in several unusual ways.

Puffballs The rather 'earthy' local name for a puffball in Suffolk is 'Bull fiest' (i.e. 'Bull fart') from the German 'Bofist', and this is reflected in the name of one genus, Bovista. The most spectacular puffball is clearly the Giant Puffball, Langermannia gigantea. Most specimens are the size of a football, or smaller, but some have been recorded much larger than this. Dried Giant Puffballs used to be kept in cottages and stables so that pieces could be used to stop bleeding; cobwebs were also used as a primitive but effective styptic agent. I have found Giant Puffballs occasionally in the woods and meadows around West Stow in west Suffolk and hear reports of it in most years during late autumn, but it is not common, The outer wall (peridium) of this rounded puffball is at first whitish and leathery, and it has a root-like cord which anchors the toadstool. The flesh (gleba) is white when young and good to eat (I suggest fried or boiled in milk) but it turns yellow-green and then brown as it dries. The whole puffball becomes filled with dry spores and sterile threads (the capillitium) which prevent all the spores being released at once. The fungus wall slowly cracks and breaks up.

S. citrinum (aurantium) is hard, and dirty yellow. S. verrucosum is more grey-brown and has well-marked 'roots'. Both species are frequently found on the soil amongst dead leaves in Suffolk woods. When cut open earth-balls are found to contain a hard purplish-black spore mass, quite unlike that of a puffball, and the peridium is very leathery. They can be found from June to November, and can be host to a parasitic fungus, Boletus parasiticus. The spores of Scleroderma are released when the peridium cracks. Earth Stars Earth Stars, Geastrum spp., can be thought of as 'puffballs on legs'. A thick peridium cracks into a number of rays, exposing the inner puffball which has a thin peridium. This inner puffball may be sessile (G. rufescens (vulgatum)) or stalked (G. coronatum et al.) and has a pore at the apex. The spores are shed by rain drops, as with many puffballs. The number of rays varies with the species. I expect to find a few G.triplex in the woods of west Suffolk during autumn, usually under deciduous trees but occasionally under conifers. This species has four-eight rays and is relatively large (up to 10 cm across). During the S.N.S. 'fungus foray' at the Country Park at Brandon on October 9th, 1994 Eleanor Heathcote spotted a specimen of the small (about 3 cm across) G.quadrifidum Pers. ex Pers. (confirmed by Dr. Martin Ellis) which was a first record for Suffolk. It has up to eight rays and the lead grey spore sac is on a short stalk. There is a pale ring round the apical opening and the spores are brown, globose and warty, 3.5-5|i.

Geastrum quadrifidum By the end of December 1993, 4,034 species of fungi had been recorded in Suffolk (the Ellis' lists) and the above record will not be the only new one since that date. We still have a lot to learn about our larger fungi in Suffolk. Dr. G. D. Heathcote, 2 St. Mary's Square, Bury St. Edmunds IP33 2AJ Trans. Suffolk Nat. Soc. 31 (1995)