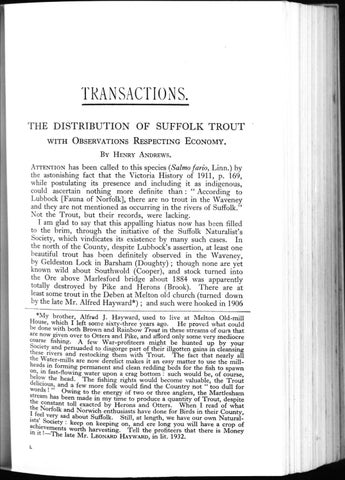 been called to this species (Salmo fario, Linn.) by the astonishing fact that the Victoria History of 1911, p. 169, while postulating its presence and including it as indigenous, could ascertain nothing more definite than : " According to Lubbock [Fauna of Norfolk], there are no trout in the Waveney and they are not mentioned as occurring in the rivers of Suffolk." Not the Trout, but their records, were lacking. 1 am glad to say that this appalling hiatus now has been filled to the brim, through the initiative of the Suffolk Natural ist's Society, which vindicates its existence by many such cases. In the north of the County, despite Lubbock's assertion, at least one beautiful trout has been definitely observed in the Waveney, by Geldeston Lock in Barsham (Doughty) ; though none are yet known wild about Southwold (Cooper), and stock turned into the Ore above Mariesford bridge about 1884 was apparently totally destroved by Pike and Herons (Brook). There are at least some trout in the Deben at Melton old church (turned down by the late Mr. Alfred Hayward*) ; and such were hooked in 1906 My brother, Alfrad J. Hayward, used to live at Melton Old-mill House, which I left some sixty-three years ago. He proved what could be done with both Brown and Rainbow Trout in these streams of Ours that are now given over to Otters and Pike, and afford only some very mediocre coarsefishing.A few War-profiteers might be hunted up bv your Society and persuaded to disgorge part of their illgotten gains in cleansing thwnVerS and restocking them with Trout. The fact that nearly all ne Water-mils are now derelict makes it an easy matter to use the millneads in forming permanent and clean redding beds for thefishto spawn n, in tast-flowing water upon a crag bottom : such would be, of course, oe ow the head. Thefishing rights foIk would findwoul the d become valuable, the Trout wo HT" ^ wm3 fewt0more Country not " too dull for th str u Pen made ? inemenergy time toof two or three anglers, the Martlesham th» y produce a quantity of Trout, despite t0Ü cxacu d the N Ifl!"and by Herons and Otters. When I read of what T f„ i RY sad about Norwich enthusiasts have done for Birds in their County, ists> SVEety Suffolk. Still, at length, we have our own Natural: , p on kee achif ' Ping °n, and ere long you will have a crop of worth in iH harvesting. Teil the profiteers that there is Money — Ihe late Mr. LEONARD HAYWARD, in lit. 1932.

ON THE DISTRIBUTION OF TROUT IN SUFFOLK.

at Ash decoy (Mr. Walter Brook of Melton). Kirton Creek (Rev. A. P. Waller) and three streams running into the Deben, the Lark at Grundisburgh (Caton), Fynn and Otley Brook, all contain Trout. In the Ipswich area they exist in ponds at Burstall and Bcntley, in Belstead Brook at both Bourn bridge and Washbrook, and in the Gipping at the Bathing Place and Sevenarches (Platten). In the south, Trout occur in the Holbrook stream running from Crag Hall to the Stour estuarv. There are odd specimens in the Stour itself; recently a photograph appeared in the Bury paper of a huge individual, which was found dead in Clovers mill-pool at Sudbury ; it was a most repulsivelooking old cannibal, weighing eighteen pounds and, if it had been in füll condition, it might have scaled half as much again. Also some are found near Semer in the Brett above Hadleigh (Burn) and in the Giern.* In the west, T r o u t are found to live in the Kennett River at Freckenham (Rev. Trevor Waller). T h e y are certainly indigenous to the River Lark, where restocking has counterbalanced destruction by pollution ; they exist now from West Stow to West Row in Mildenhall. A short length of the Lark's Cavenham tributarv teems with small examples, and the fine pool helow the mill is füll of peculiarly large ones that eagerly feed upon bread thrown to them. T h e Tuddenham tributary of the Lark also contains this fish, and formerly it supported a hatchery.—That, I think, fairly completely " boxes the compass " of Suffolk Trout. Quite contrarily to the spring habits of most fresh-water fish, the mating or spawning season of the Brown T r o u t occurs in the first half of winter. Düring the first sharp frosts of autumn, the adult fish leave their summer haunts and move upstream to headwaters or tributaries, which form the offspring's nurseries T h e male usually selects his mate at the spawning-grounds, that consist of sharp runs of the stream over a clean gravelly bed. Some days after pairing, the female begins to spawn, which she does by wriggling upon her side and flapping with her tail until in the gravel is formed a shallow trench, wherein the ova are deposited. Meanwhile the male follows attentively, and Covers the ova with his own milt or soft row, which fertilises as many of the eggs as it touches. T h e female keeps moving forward and automatically Covers u p the ova in making the next trench ; but an enormous percentage are abortive, for the male has to persistently drive off other males and many of the ova are snapped u p by expectant Minnows. This process being completed, the exhausted fish drop back to the deeps tili the following spring. * T h e G l e m t r o u t are quite possibly related to those p u t down by S q u i r e Weller Poley of Boxstead Hall. L o r d L o c h is believed to have i n t r o d u c e d t r o u t into t h e S t o u r at Clare-Stoke College. T r o u t seero to be u n r e c o r d e d , as far as is k n o w n , f r o m t h e S t o u r at Cläre since 1904, w h e n one of two p o u n d s and fourteen ounces was killed, duly stuffed and yet there survives.—COI.ONEL BOND, D . S . O . , in lit. 1933.

ON THE DISTRIBUTION OF TROUT IN SUFFOLK.

In due course the eggs hatch, when the baby Trout in their first stage are known as alevins. For long they are under an inch in length and very helpless ; the mouth organs do not develop, but under the body of each little fish is a considerable yolk-sac, the contents of which are gradually assimilated as nourishment. As soon as this sac is quite absorbed,the mouth develops into being ; and the fish, now perfected miniatures of the adult, are collectively called fry. The rate of its increase in size is in direct ratio to the food-supply and suitability of the surrounding water. Like the stag, it attains its prime in about six years, and remains in that condition for a few more, after which period it declines, ceases to breed, and grows lean and lanky with a great hooked lower jaw.

Their food consists of almost every kind of small aquatic life, such as freshwater Shrimps (Asellus aquaticus, Linn.), worms, snails, spiders, small fish, beetles and the subaqueous stages of various other insects, with any flies and caterpillars that they are able to annex from the surface of the water. Old Trout will take also shrews, frogs, smaller editions of their own kind, and in fact, anything they are capable of Coming at and swallowing. In the everlasting struggle for existence, very numerous enemies attack this fish : their ova are consumed by wading birds and cannibalistic fish, including eels ; alevins have to run the gauntlet of other predatory fish, kingfishers, herons and, in places, such birds as grebes and cormorants ; finally the fry fall to Otters, and adults to man himself. They will thrive in almost any quite-pure waters, throughout the temperate zone ; but, whenever they occur in lakes or sluggish streams, fast running affluents are necessary for their spawning and, of course, slack competition helps their growth.

THE investigations of William Kirby of Barham, F.R.S., into the economy of these repulsive but most interesting Myriapoda, have been hitherto overlooked by modern scientists ; in his day, they feil within the scope of Insects and the typical species bcolopendra electrica, Linn., relegated to the genus Geophilus - b a m Â° u e l l e in 1819, p. 117) was doubtless confused with allied ones. Kirby found both carrots, " which form a valuable part of the crop of sand-lands in Suffolk," and parsnips to be much mjured by the small Centiped, Geophilus electricus, and another myriapod Polydesmus complanatus, Linn., that eat into the upper r00ts rimV ( K i r b y a n d S P e n c e > Introd. Entom., Ed. 1859, ln T ^ e former is also carnivorous, for it assimilates the ommon Earthworm (.Lumbricus terrestris, Linn.) and " the Rev.

On the Distribution of Trout in Suffolk, with Observations respecting its Economy

On the Distribution of Trout in Suffolk, with Observations respecting its Economy