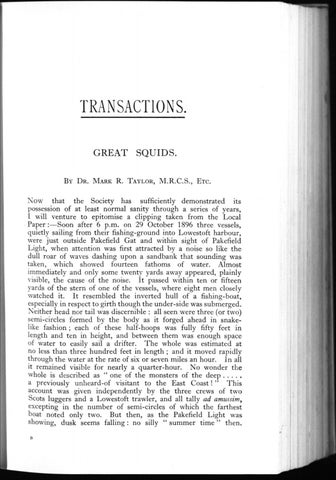 N o w that the Society has sufficiently demonstrated its possession of at least normal sanity through a series of years, I will venture to epitomise a clipping taken from the Local P a p e r : â&#x20AC;&#x201D; S o o n after 6 p.m. on 29 October 1896 three vessels, quietly sailing from their fishing-ground into Lowestoft harbour, were just outside Pakefield Gat and within sight of Pakefield Light, when attention was first attracted by a noise so like t h e dull roar of waves dashing upon a sandbank that sounding was taken, which showed fourteen fathoms of water. Almost immediately and only some twentv yards away appeared, plainly visible, the cause of the noise. It passed within ten or fifteen yards of the stern of one of the vessels, where eight men closely watched it. It resembled the inverted hull of a fishing-boat, especially in respect to girth though the under-side was submerged. Neither head nor tail was discernible : all seen were three (or two) semi-circles formed by the body as it forged ahead in snakelike fashion ; each of these half-hoops was fully fifty feet in length and ten in height, and between them was enough space of water to easily sail a drifter. T h e whole was estimated at no less than three h u n d r e d feet in length ; and it moved rapidly through the water at the rate of six or seven miles an hour. In all it remained visible for nearly a quarter-hour. N o wonder t h e whole is described as " one of the monsters of the deep a previously unheard-of visitant to the East C o a s t ! " T h i s account was given independently by the three crews of two Scots luggers and a Lowestoft trawler, and all tally ad amussim, excepting in the n u m b e r of semi-circles of which the farthest boat noted only two. But then, as the Pakefield Light was showing, dusk seems falling : no silly " summer time " then.

W e have always devoutlv believed, not in the traditional Serpent but in the discovery of its explanation : Gosse's most interesting theory of the survival of Plesiosauri (Romance Nat. Hist. 1861, 300-68 : Cuvier's later cretaceous Mosasauri of fifty feet are actually more likely to have persisted) was too far-fetched and Lieut.-Comr. R. T . Gould's 1930 " Case for the S e a - S e r p e n t " goes little further than Bishop Pontoppidan's early circumstantial data. Hence it was with no small ardour that we followed Prof. d'Arcy Thomson's Royal Institution lectures of January 1919, when he demonstrated the fabulous Serpent to be a, or consist of several great Squids. He lucidly explained that these giant Cuttle-fishes' arms attain an expanse of quite fifty feet and, when seen without the submerged body, strongly resemble snakes ; the tail looks very like a snake's head, on account if its triangular apical shell; and the ejected stream of water is not oral, but rises from the funnel whence the Cuttle blows that stream of sepia-ink which camouflages it when attacked. Usually these horrid Cephalopods disport themselves off Newfoundland, where one of fifty-two feet in expanse was found to weigh just one thousand pounds. All Cephalopods possess a short-levered beak, curiously like a parrot's but so much stronger that they can crush the densest Oyster and make short work of a Lobster's carapace. For all this, fish are very keen on devouring their gelatinous musky flesh. Unlike the shallow-water Octopus lacking fins, our Squids are pelagic and free swimmers, whose bodies are guided b u t not propelled by a pair of horizontal fins. Just as we row by pushing the water backwards, a Squid progresses by ejecting a jet of water from the pipe in its neck, the resistence of the surrounding sea to which jet being greater than that to the animal's body throws the latter forward. Besides the Octopus' eight tentacles which in no known species are longer than six feet, Squids have two of at least double and often even quadruple the others' length and differently shaped ; all these spring from the crown of the head, but the extra two have sucker-discs only near their apices and seem to serve no purpose beyond that of feelers or antennÂť. T h e Squid most nearly approaches Vertebrate animals in the possession of a rudimentary backbone, ridged along its under side. This " pen " is a flat and elongate rod of c.lear thin gristle, accuminate at each extremity and broadest slightly before its centre. It materiallv differs from all vertebrae, however, in lying quite loosely in the mantle, unattached in any way to the muscular system. Among Squids are the very largest and most ferocious of all Invertebrate Animals (Shipley, 217), usually gregarious in their habits ; and nothing is capable of digesting them but the tropical

Sperm Whales (Physeter macrocephalus, L.), with which they wage battles royal. " I n our seas, none of the Cephalopods are large enough to be formidable to m a n , " asserts Knight's dear old " Animated N a t u r e , " showing these giants then unrecognized here. But, since its publication, monsters have occasionally turned u p : One such (Architeuthis dux), that was captured after a five-miles' chase off the Irish coast near Boffin Island, had been itself at first mistaken for an island ! It had tentacular arms thirty feet in length, which are the exact dimensions cited with the weight of seven hundred pounds for a specimen, quite possibly of the self-same species, by Pliny (Caius Plinius Secundus, in Historia Naturalis, libr. xxxvii ; cf. ed. Veronae, 1507) who died as long ago as A.D. 113 ! Yet so incredulous were we, despite Sabin Berthelot's exact description (CR. Acad. Sei. Paris, 1862), that it was not tili 1873 that Science in general recognized their existence, upon an example Coming at length beneath zoological examination (sec. Kent's " Gigantic Cuttlefish"). Of course, rounding our coast would represent little exertion to such a creature, or to the allied A. monachus and A. Harveii, both said to also occasionally occur in British waters (cf. Proc. Malac. Soc. xviii, 1929) : especially in October, when our North Sea is at its wärmest. T h e Lowestoft semicircles each represented an arm, belonging, as the space of sea between t h e m shows, to distinet individuals. Hence I consider the Suffolk " Sea Serpent " to actuallv have been a shoal of three—or two : all then visible above the waves— great Squids of the genus Architeuthis (Steenstr. 1856), swimming in line echelon. W e are indebted to the E. An°lian Daily Times of 31 October 1896 for perpetuating the above account of them : anything viearly so large is otherwise quite unknown among the extant Fauna of Suffolk.*

A voung W H I T E STORK (Ciconia alba, Bech.), differing in flight from a Heron, has been at Fiatford since the first week of October.—L. R I C H A R D S O N , Valley Farm, E. Bergholt: in 1k. 21 Nov. 1932. Mr. G. C. Robson of the British Museum does not agree with me, but considers the above narrative insufficient upon which " to give an opinion concerning the alleged Sea-serpent. The feature which appears so> often in Sea-serpent stories figures here, narnely, the undulating loops. 1 he Squid school of explanation always deals with this by saying that it is produced by the undulating tentacles. All I can say is that an Architeuthis, shooting through the water at seven miles an hour with the tentacles trailing behind it, is not likely to produce a regulär impression of undulation though, during the intervals between the ejection of water |rom the funnel, the tentacles might curve up from the extended position. 1 do not know whether the noise is evidential ; I should think not " (in 1«. 24 Feb. 1932).