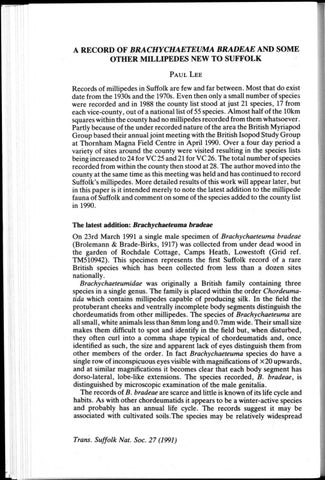 A N D SOME

Records of millipedes in Suffolk are few and far between. Most that do exist date from the 1930s and the 1970s. Even then only a small number of species were recorded and in 1988 the county list stood at just 21 species, 17 from each vice-county, out of a national list of 55 species. Almost half of the 10km squares within the county had no millipedes recorded from them whatsoever. Partly because of the under recorded nature of the area the British Myriapod Group based their annual joint meeting with the British Isopod Study Group at Thornham Magna Field Centre in April 1990. Over a four day period a variety of sites around the county were visited resulting in the species lists being increased to 24 for VC 25 and 21 for VC 26. The total number of species recorded from within the county then stood at 28. The author moved into the county at the same time as this meeting was held and has continued to record Suffolk's millipedes. More detailed results of this work will appear later, but in this paper is it intended merely to note the latest addition to the millipede fauna of Suffolk and comment on some of the species added to the county list in 1990. The latest addition: Brachychaeteuma bradeae On 23rd March 1991 a single male specimen of Brachychaeteuma bradeae (Brolemann & Brade-Birks, 1917) was collected from under dead wood in the garden of Rochdale Cottage, Camps Heath, Lowestoft (Grid ref. TM510942). This specimen represents the first Suffolk record of a rare British species which has been collected from less than a dozen sites nationally. Brachychaeteumidae was originally a British family containing three species in a single genus. The family is placed within the order Chordeumatida which contains millipedes capable of producing silk. In the field the protuberant cheeks and ventrally incomplete body segments distinguish the chordeumatids from other millipedes. The species of Brachychaeteuma are all small, white animals less than 8mm long and 0.7mm wide. Their small size makes them difficult to spot and identify in the field but, when disturbed, they often curl into a comma shape typical of chordeumatids and, once identified as such, the size and apparent lack of eyes distinguish them from other members of the order. In fact Brachychaeteuma species do have a single row of inconspicuous eyes visible with magnifications of x20 upwards, and at similar magnifications it becomes clear that each body segment has dorso-lateral, lobe-like extensions. The species recorded, B. bradeae, is distinguished by microscopic examination of the male genitalia. The records of B. bradeae are scarce and little is known of its life cycle and habits. As with other chordeumatids it appears to be a winter-active species and probably has an annual life cycle. The records suggest it may be associated with cultivated soils.The species may be relatively widespread

within Suffolk if it is searched for carefully at the right time of the year (late winter and early spring) especially in synanthropic habitats such as gardens. Species recorded during the BMG meeting Many of the species added to the county lists during the BMG meeting were also small animals. Stygioglomeris crinata Brolemann, 1913 is a very small (2.0-3.5mm long) relative of the common pill millipede Glomeris marginata (Villers, 1789). Its size, lack of pigment and ability to roll into a ball make this species difficult to distinguish from a grain of sand but D. T. Bilton collected it for the first time from Suffolk in Thornham Park (TM10 71). This species is also probably more common than the number of records of it would suggest. The same collector also recorded Macrosternodesmus palicola Brolemann, 1908 from the same site while the author recorded the same species from Bulls Wood, Cockfield (TL922546) thus adding the species to both VC lists. Yet again this is a small (4mm long, 0.4mm wide), white animal despite its name. It differs from the previous species in having a flat-backed appearance due to lateral keels present on each of its body segments. Two small (approx. 15mm long, 0.5mm wide) cylindrical snake millipedes, Thalassisobates littoralis (Silvestri, 1903) and Nopoiulus kochii (Gervais, 1847), were also added to the county list by D. T. Bilton when he visited Felixstowe Docks (TM28 31). These species appear to be true rarities, but T. littoralis may well be found at other sites along the coast, while N. kochii could conceivably turn up anywhere in the county. The final additions were three larger snake millipedes, all of the genus Cylindroiulus. Cylindroiulus caeruleocinctus (Wood, 1864) taken by the author in Groton Wood, Hadleigh (TL979431) is a large, black millipede which will probably be found at scattered sites around the county. Cylindroiulus parisiorum (Brolemann & Verhoeff, 1896) taken by R. E. Jones in Barking churchyard (TM077537) is the smallest and rarest of the three species. It is a pale colour but with bright red spots along its sides. There are as yet unconfirmed reports of a specimen of this species from Rectory Farm, Thrandeston (TM122768) collected prior to the Barking specimen. Slightly darker in colour but with the same red spots, Cylindroiulus britannicus (Verhoeff, 1891) was another of D. T. Bilton's finds at Thornham. This is a much commoner species than the others listed here and will probably prove to be widespread in both vice-counties. Conclusion The number of millipede species recorded from Suffolk now stands at twenty-nine. Eight of these species have been added over a period of just twelve months and it is probable that there are still other species to be found. The known distribution of all the species within the county could certainly be increased with more fieldwork, especially in those areas not yet visited by collectors. The author is undertaking the task of improving our knowledge of the county's millipede fauna but would welcome any assistance with this task.

He will gladly identify specimens sent to him with locality data and would be especially interested to receive collections from gardens and garden centres. Acknowledgements The author wishes to thank Mr. R. E. Jones the national recorder for the millipedes for details of the species collected during the BMG meeting at Thornham Magna. References Blower, J. G. (1985). Millipedes. Synopses of the British Fauna (New Series) No. 35. Leiden. E. J. Brill. British Myriapod Group (1988). Preliminary Atlas of the Millipedes of the British Isles. Huntingdon. Biological Records Centre. P. Lee, Rochdale Cottage, Camps Heath, Lowestoft, NR32 5DW