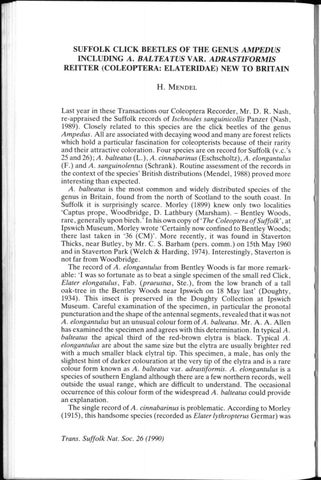 Last year in these Transactions our Coleoptera Recorder, Mr. D. R. Nash, re-appraised the Suffolk records of Ischnodes sanguinicollis Panzer (Nash, 1989). Closely related to this species are the click beetles of the genus Ampedus. All are associated with decaying wood and many are forest relicts which hold a particular fascination for coleopterists because of their rarity and their attractive coloration. Four species are on record for Suffolk (v.c.'s 25 and 26); A balteatus (L.), A. cinnabarinus (Eschscholtz), A. elongantulus (F.) and A. sanguinolentus (Schrank). Routine assessment of the records in the context of the species' British distributions (Mendel, 1988) proved more interesting than expected. A. balteatus is the most common and widely distributed species of the genus in Britain, found from the north of Scotland to the south coast. In Suffolk it is surprisingly scarce. Morley (1899) knew only two localities 'Captus prope, Woodbridge, D. Lathbury (Marsham). - Bentley Woods, rare, generally upon birch.' In his own copy of'The Coleoptera of Suffolk', at Ipswich Museum, Morley wrote 'Certainly now confined to Bentley Woods; there last taken in '36 (CM)'. More recently, it was found in Staverton Thicks, near Butley, by Mr. C. S. Barham (pers. comm.) on 15th May 1960 and in Staverton Park (Welch & Harding, 1974). Interestingly, Staverton is not far from Woodbridge. The record of A. elongantulus from Bentley Woods is far more remarkable: 'I was so fortunate as to beat a single specimen of the small red Click, Elater elongatulus, Fab. (praeustus, Ste.), from the low branch of a tall oak-tree in the Bentley Woods near Ipswich on 18 May last' (Doughty, 1934). This insect is preserved in the Doughty Collection at Ipswich Museum. Careful examination of the specimen, in particular the pronotal puncturation and the shape of the antennal segments, revealed that it was not A. elongantulus but an unusual colour form of A. balteatus. Mr. A. A. Allen has examined the specimen and agrees with this determination. In typical A balteatus the apical third of the red-brown elytra is black. Typical A. elongantulus are about the same size but the elytra are usually brighter red with a much smaller black elytral tip. This specimen, a male, has only the slightest hint of darker colouration at the very tip of the elytra and is a rare colour form known as A. balteatus var. adrastiformis. A. elongantulus is a species of southern England although there are a few northern records, well outside the usual range, which are difficult to understand. The occasional occurrence of this colour form of the widespread A. balteatus could provide an explanation. The single record of A cinnabarinus is problematic. According to Morley (1915), this handsome species (recorded as Elater lythropterus Germar) was

SUFFOLK CLICK BEETLES OF THE G E N U S

'Found in Tuddenham Fen, in 1887 (Tomlin)'. Tuddenham Fen, in the valley of the R. Lark, West Suffolk is an unlikely locality for the species even though the general area has a very rich saproxylic beetle fauna (Mendel, 1989). A. cinnabarinus is most well known from sites in the West Sussex (in particular Arundel Park) and the New Forest where it is usually associated with rotten beech, Fagus sylvatica L. However, in recent years the discovery of new sites in the west, particularly in Gloucester and Monmouth (v.c.'s 33, 34 and 35), makes it likely that the true distribution, when better known, will have a western bias. Tuddenham Fen, West Suffolk (v.c. 26) is well outside the emerging pattern of distribution and the habitat is atypical for A. cinnabarinus, although not impossible - 1 have seen a specimen found by Dr. K. N. A. Alexander in rotten wood, probably alder, Alnus glutinosa (L.) Gaertn. in alder carr at Cannop Marsh Nature Reserve, West Gloucester (v.c. 34) in 1985. The species of Ampedus with all-red elytra, the so called 'red Elaters\ are notoriously difficult to identify, and literature records must be treated with extreme caution. Whilst typical specimens can be determined with relative ease, by the experienced eye, individual variants, which are not uncommon, are likely to be misidentified. Specimens of A. cinnabarinus and A. quercicola (du Buysson) (pomonae auctt. Brit.) are particularly liable to be confused and the principal characters used to separate the two species in Tomlin's day (colour of pubescence and presence or absence of darkened elytral apex) are now known to be unreliable. I have for some time thought it more likely that Tomlin actually found A. quercicola. The species is well known from the East Anglian fens (Mendel, 1990) where it breeds in red-rotten birch, Betula sp. and is known from Chippenham Fen, less than 6 miles to the South-west, just over the border in Cambridgeshire (v.c. 29). Further evidence in support of this view came on 22nd February, 1990 when I found a single A. quercicola in a soft red-rotten birch log in an area of wet, open birch woodland (TL 7472) by Tuddenham Heath (near Tuddenham Fen and within the boundary of the Cavenham Heath National Nature Reserve). A single larva was found nearby in a log in a similar state of decay. Although A. quercicola is here recorded 'new to Suffolk' there can be little doubt that Tomlin's 'red Elater' from Tuddenham Fen over a century ago should be referred to this species. J. R. le B. Tomlin died in 1954. His collection, now in the National Museum of Wales, does not contain a specimen of any of the 'red Elaters' from Tuddenham Fen (A. H. Kirk-Spriggs, in lift.). Unless Tomlin's specimen(s) can be found the Suffolk record of A. cinnabarinus should be disregarded. A. sanguinolentus is not known from Suffolk. It was recorded in error (Mendel, 1988) as a result of a mistake by Fowler and Donisthorpe (1913) who refer to Ischnodes sanguinicollis by the name 'Ischnodes sanguinolentus'. Although there are published Suffolk records for four species of Ampedus only those records for A. balteatus stand critical examination. The discovery of A. balteatus var adrastiformis, not previously known from Britain is of particular interest. A. quercicola is recorded from Suffolk for the first time.

More Fungi for the Suffolk List Writing from the British Museum on 28th Feb. 1990 for a copy of Martin and Pam Ellis' book 'Fungi and slime moulds in Suffolk' Dr. R. A. Fortey commented that he has a cottage at Southwold and is a regular fungus forayer. He can add Volvariella parvispora Reid from Reydon Wood (1987) and Leucoprinus georginae from Minsmere (1988) to the Suffolk list. Both identifications ratified by Reid at Kew. He also found the very rare Amanita gemmata (Fr.) Gill, at Reydon this year. This deadly poisonous fungus has a straw-yellow cap. (Editor)