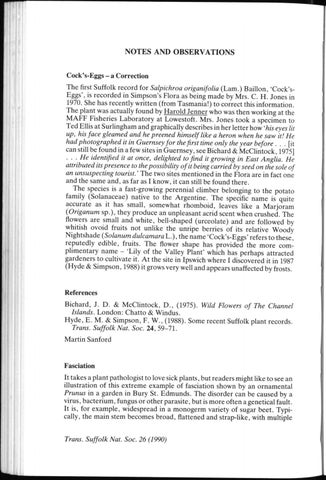 Cock's-Eggs - a Correction The first Suffolk record for Salpichroa origanifolia (Lam.) Baillon, 'Cock'sEggs', is recorded in Simpson's Flora as being made by Mrs. C. H. Jones in 1970. She has recently written (from Tasmania!) to correct this information. The plant was actually found by Harold Jenner who was then working at the MAFF Fisheries Laboratory at Lowestoft. Mrs. Jones took a specimen to Ted Ellis at Surlingham and graphically describes in her letter how'his eyes lit up, his face gleamed and he preened himself like a heron when he saw it! He had photographed it in Guernsey for the first time only theyear before . . . [it can still be found in a few sites in Guernsey, see Bichard & McClintock, 1975] . . . He identified it at once, delighted to find it growing in East Anglia. He attributed its presence to the possibility ofit being carried by seed on the sole of an unsuspecting tourist.' The two sites mentioned in the Flora are in fact one and the same and, as far as I know, it can still be found there. The species is a fast-growing perennial climber belonging to the potato family (Solanaceae) native to the Argentine. The specific name is quite accurate as it has small, somewhat rhomboid, leaves like a Marjoram (Origanum sp.), they produce an unpleasant acrid scent when crushed. The flowers are small and white, bell-shaped (urceolate) and are followed by whitish ovoid fruits not unlike the unripe berries of its relative Woody Nightshade (Solanum dulcamara L.), the name 'Cock's-Eggs' refers to these, reputedly edible, fruits. The flower shape has provided the more complimentary name - 'Lily of the Valley Plant' which has perhaps attracted gardeners to cultivate it. At the site in Ipswich where I discovered it in 1987 (Hyde & Simpson, 1988) it grows very well and appears unaffected by frosts.

Fasciation It takes a plant pathologist to love sick plants, but readers might like to see an illustration of this extreme example of fasciation shown by an ornamental Prunus in a garden in Bury St. Edmunds. The disorder can be caused by a virus, bacterium, fungusorother parasite, but is more often a genetical fault. It is, for example, widespread in a monogerm variety of sugar beet. Typically, the main stem becomes broad, flattened and strap-like, with multiple