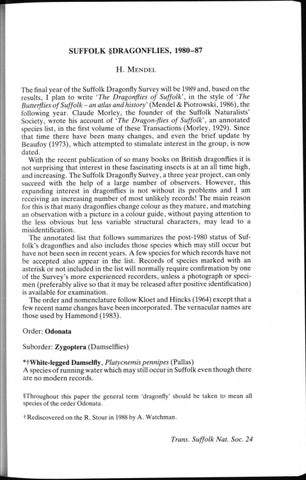 The final year of the Suffolk Dragonfly Survey will be 1989 and, based on the results, I plan to write 'The Dragonflies of Suffolk', in the style of ' T h e Butterflies of Suffolk - an atlas and history' (Mendel & Piotrowski, 1986), the following year. Claude Morley, the founder of the Suffolk Naturalists' Society, wrote his account of ' T h e Dragon-flies of Suffolk', an annotated species list, in the first volume of these Transactions (Morley, 1929). Since that time there have been many changes, and even the brief update by Beaufoy (1973), which attempted to stimulate interest in the group, is now dated. With the recent publication of so many books on British dragonflies it is not surprising that interest in these fascinating insects is at an all time high, and increasing. The Suffolk Dragonfly Survey, a three year project, can only succeed with the help of a large number of observers. However, this expanding interest in dragonflies is not without its problems and I am receiving an increasing number of most unlikely records! The main reason for this is that many dragonflies change colour as they mature, and matching an observation with a picture in a colour guide, without paying attention to the less obvious but less variable structural characters, may lead to a misidentification. The annotated list that follows summarizes the post-1980 status of Suffolk's dragonflies and also includes those species which may still occur but have not been seen in recent years. A few species for which records have not be accepted also appear in the list. Records of species marked with an asterisk or not included in the list will normally require confirmation by one of the Survey's more experienced recorders, unless a photograph or specimen (preferably alive so that it may be released after positive identification) is available for examination. The order and nomenclature follow Kloet and Hincks (1964) except that a few recent name changes have been incorporated. The vernacular names are those used by H a m m o n d (1983). Order: Odonata Suborder: Zygoptera (Damselflies) *+White-!egged Damselfly, Platycnemis pennipes (Pallas) A species of running water which may still occur in Suffolk even though there are no modern records. SThroughout this paper the general term 'dragonfly' should be taken to mean all species of the order Odonata. t Rediscovered on the R. Stour in 1988 by A. Watchman. Trans. Suffolk Nat. Soc. 24

Large Red Damselfly, Pyrrhosoma nymphula (Sulzer) A widespread species with a long season; still fairly common in Suffolk but seldom found in large numbers. Blue-tailed Damselfly, Ischnura elegans (van der Linden) The commonest and most widely distributed damselfly in Suffolk. Probably more tolerant of pulluted waters than any other British species and also tolerant of brackish conditions. Common Blue Damselfly. Enallagma cyathigerum (Charpentier) One of the commonest damselflies in Suffolk and quick to colonise newly excavated pits and reservoirs. Azure Damselfly, Coenagrion puella (L.) Widespread in Suffolk but most common along fresh-water dykes in areas of grazing marshes where large numbers may be found in suitable localities. ""Variable Damselfly, Coenagrion pulchellum (van der Linden) Easily confused with the previous species with which it often occurs. This may explain why there are so few recent records. *Small Red Damselfly, Ceriagrion tenellum (de Villers) Not seen in Suffolk for many years, but a thorough search of fenland in the north of the County may result in the rediscovery of this species. Red-eyed Damselfly, Erythromma najas (Hansemann) An uncommon species, known in recent years only from the valley of the Stour where it prefers areas of still water with abundant floating vegetation. Males holding territories from lily-pads some distance from the bank may easily be overlooked. *Scarce Emerald Damselfly, Lestes dryas Kirby Once found in Suffolk, though not recorded for many years. This species was thought to have become extinct on the British mainland. It was rediscovered in Essex and Kent in 1983 (Benton, 1983), and has since been found in Norfolk. Who will be the first person to rediscover the Scarce Emerald in Suffolk? Emerald Damselfly, Lestessponsa (Hansemann) A locally common species in Suffolk often numerous in the brackish dyke systems of the coastal area but equally at home in the fens. Banded Demoiselle, Calopteryxsplendens (Harris) [MAP 1 1980-87] Not uncommon along the less polluted stretches of the County's major river systems and especially numerous along the Stour and the Waveney. ^Beautiful Demoiselle, Calopteryx virgo (L.) Morley (1929) confuses records of this species with the last. The very few

post-1980 records are from the R. Stour and there is some doubt whether the Beautiful Demoiselle still breeds in Suffolk. Suborder: Anisoptera (true Dragonflies) *Golden-ringed Dragonfly, Cordulegaster boltonii (Donovan) I have received several post-1980 records of this species none of which has either been confirmed or accepted. Hairy Dragonfly, Brachytron pratense (Miiller) An uncommon species of East Suffolk, only occasionally seen away from the grazing marshes where it breeds. The Hairy Dragonfly is on the wing in May and June, well before the superficially similar "blue Aeshnas'. Southern Hawker, Aeshna cyanea (Miiller) Widespread and common, often seen well away from water hawking along lanes or woodland rides. Brown Hawker, Aeshna grandis (L.) Easily recognised by the brown-tinted wings, the Brown Hawker is common and widespread in Suffolk. It is most frequent about slow moving stretches of rivers and their associated grazing marshes or the County's larger water bodies. Trans. Suffolk Nat. Soc. 24

*ÂąNorfolk Hawker, Aeshna isosceles (Miiller) Single specimens occasionally seen in Suffolk are usually regarded as vagrants from the Norfolk Broads. The Norfolk Hawker is included on 'Schedule 5' of the Wildlife and Countyside Act 1981 and should not be collected. *Common Hawker, Aeshna juncea (L.) In spite of its vernacular name the Common Hawker is a rare species in Suffolk. I have been called out on many occasions to confirm an identification only to find Southern Hawkers. The very few acceptable post-1980 records are from the Waveney valley area of north-east Suffolk. Migrant Hawker, Aeshna mixta Latreille In Morley's day this species was a rarity in Suffolk. It is now well established and fairly common, especially along the coastal belt. Emperor Dragonfly, Anax imperator Leach Widespread but scarce in Suffolk. The Southern Hawker is often mistaken for this species by the inexperienced observer. *Downy Emerald, Cordulia aenea (L.) This species has occurred in Suffolk but not in recent years. It is most probably extinct in the County. Black-tailed Skimmer, Orthetrum cancellatum (L.) Not known from Suffolk in Morley's day but now widespread and becoming increasingly common. Flooded sand and gravel workings with little marginal vegetation are favourite haunts. *KeeIed Skimmer, Orthetrum coerulescens (F.) At one time the commoner of the two 'Skimmers' in Suffolk but not recorded in the 1980-87 period. Possibly extinct. Broad-bodied Chaser, Libellula depressa L. An early summer species which is local and scarce in Suffolk. It is often seen singly away from water. Scarce Chaser, Libellula fulva Miiller A rare species nationally, the Scarce Chaser appears to be confined, in Suffolk, to the north-east where it is locally common on grazing marshes along the R. Waveney. Four-spotted Chaser, Libellula quadrimaculata L. Local in Suffolk, but widely distributed as might be expected of a species renowned for its powers of dispersal.

*Black Darter, Sympetrum danae (Sulzer) No Suffolk record of this species has either been confirmed or accepted even though one claim appears in print (Paine, 1988). The Black Darter is found widely in Britain but is rare in East Anglia and the South-east. *Yellow-winged Darter, Sympetrum flaveolum (L.) An uncommon and irregular migrant from the Continent which has been recorded several times from Suffolk. It should be remembered that the wings of old individuals of the Common Darter acquire an amber tinge. *Red-veined Darter, Sympetrum fonsolombei (Selys) A very rare migrant from the Continent not seen in Suffolk for over seventy-five years. *Ruddy Darter, Sympetrum sanguineum (Miiller) Widespread but local in Suffolk and usually found with the following species from which it is best distinguished by the black legs (without any sign of a longitudinal yellow stripe). Common Darter, Sympetrum striolatum (Charpentier) [MAP 2 1980-87] One of Suffolk's commonest species often seen well away from water and, in suitable habitats, occurring in huge numbers.

In the 1980-87 recording period 22 species of dragonflies have been recorded from Suffolk. The breeding status of three of these, Beautiful Demoiselle, Norfolk Hawker and Common Hawker, has yet to be established. Additional species which may be found during the final two years of the Survey are Scarce Emerald, White-legged and Small Red Damselflies. The two irregular migrants, Yellow-winged Darter and Red-veined Darter could appear in any season. Other species are far less likely to be found in Suffolk but should not be ruled out. Acknowledgements I thank all the recorders who are helping with the Suffolk Dragonfly Survey. They will be fully acknowledged in "The Dragonflies of Suffolk". References Beaufoy, S. (1973). Suffolk dragonflies. Trans. Suffolk Nat. Soc., 16,95. Benton, E. and Payne, R. G. (1983). On the rediscovery of Lestes dryas Kirby, in Britain, J. Br. Dragonfly Soc., 1, 28. Hammond, C. O. (1983). The dragonflies of Great Britain and Ireland. 2nd edition, revised by R. Merritt. Colchester: Harley Books. 116pp. Kloet, G. S. and Hincks, W. D. (1964). A check list of British insects. 2nd edition (revised). Part 1: small orders and Hemiptera. Handbk Ident. Br. Insects, 11 (1), 14. Mendel, H. and Piotrowski, S. H. (1986). The butterflies of Suffolk- an atlas and history. Ipswich: Suffolk Naturalists' Society. 128pp. Morley, C. (1929). The dragon-flies of Suffolk. Trans. Suffolk Nat. Soc., 1, 19. Paine, A. R. J. (1988), 10. Special sighting section. British Dragonfly Society Newsletter, No. 13, pp. 5-6. H. Mendel The Museum, High Street, Suffolk IP1 3QH.