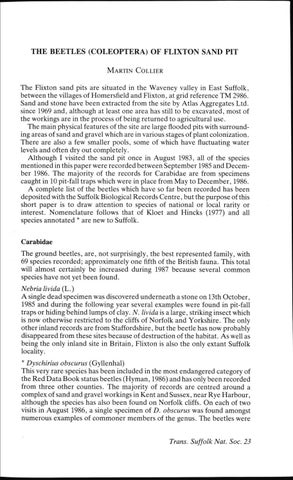 The Flixton sand pits are situated in the Waveney Valley in East Suffolk, between the villages of Homersfield and Flixton, at grid reference T M 2986. Sand and stone have been extracted from the site by Atlas Aggregates Ltd. since 1969 and, although at least one area has still to be excavated, most of the workings are in the process of being returned to agricultural use. The main physical features of the site are large flooded pits with surrounding areas of sand and gravel which are in various stages of plant colonization. There are also a few smaller pools, some of which have fluctuating water levels and often dry out completely. Although I visited the sand pit once in August 1983, all of the species mentioned in this paper were recorded between September 1985 and December 1986. The majority of the records for Carabidae are from specimens caught in 10 pit-fall traps which were in place from May to December, 1986. A complete list of the beetles which have so far been recorded has been deposited with the Suffolk Biological Records Centre, but the purpose of this short paper is to draw attention to species of national or local rarity or interest. Nomenclature follows that of Kloet and Hincks (1977) and all species annotated * are new to Suffolk. Carabidae The ground beetles, are, not surprisingly, the best represented family, with 69 species recorded; approximately one fifth of the British fauna. This total will almost certainly be increased during 1987 because several common species have not yet been found. Nebria livida (L.) A Single dead specimen was discovered underneath a stone on 13th October, 1985 and during the following year several examples were found in pit-fall traps or hiding behind lumps of clay. N. livida is a large, striking insect which is now otherwise restricted to the cliffs of Norfolk and Yorkshire. The only other inland records are from Staffordshire, but the beetle has now probably disappeared from these sites because of destruction of the habitat. As well as being the only inland site in Britain, Flixton is also the only extant Suffolk locality. * Dyschirius obscurus (Gyllenhal) This very rare species has been included in the most endangered category of the Red D a t a Book status beetles (Hyman, 1986) and has only been recorded from three other counties. The majority of records are centred around a complex of sand and gravel workings in Kent and Sussex, near Rye H a r b o u r , although the species has also been found on Norfolk cliffs. On each of two visits in August 1986, a Single specimen of D. obscurus was found amongst numerous examples of commoner members of the genus. The beetles were

present in the sand and clay surrounding a small pool which, within the site, seems to have unique characteristics in that it forms part of a natural drainage course and the wet sand and mud is particularly deep. Other uncommon Carabids which have been recorded include: Dyschirius politus ( D e j e a n ) , D. thoracicus (Rossi), Trechus discus (F.), Bembidion stephensi Crotch, Laemostenus terricola (Herbst), Amara consularis (Duftschmid), A. fulva (MĂźller) and Chlaenius vestitus (Paykull). Hydrophilidae *Cercyon bifenestratus KĂźster A Single specimen of this beetle was found on 15th September, 1985. The species is reputedly associated with sand pits and although it is found at Rye H a r b o u r , records are few (Collier, 1985). C. bifenestratus may be underrecorded because the genus is not populĂ¤r with amateur coleopterists; the large number of common species which are usually encountered discourages repeated examinations. Heteroceridae *Heterocerus hispidulus Kiesenwetter Initially found in low numbers in September 1985, this species appeared to have something of a population explosion in 1986 and it now outnumbers the common H. fenestratus (Thunberg). Although first discovered in this country almost 18 years ago, this very mobile beetle had, somewhat surprisingly, not previously been found more than a few miles away from the original site at Rye H a r b o u r , East Sussex (Allen, 1970). Flixton sand pits would normally have been reclaimed as arable land, excepting the larger water filled pits. With the possible exception of H. hispidulus, this restoration process would almost certainly result in the total loss of many of the species mentioned in these notes. However, following discussions involving Atlas Aggregates Ltd. and T h e Suffolk Trust for Nature Conservation, there now appears to be every reason to hope that at least some areas within the site can be preserved in their present condition. Acknowledgements I would like to thank Atlas Aggregates Ltd., and Mr. Webster in particular, for both allowing me access to the site and for showing a sympathetic attitude towards conserving it. For information on distribution and for help in identifying critical species of Carabidae, I am grateful to Dr. Martin Luff. References Allen, A . A . (1970). Heterocerus hispidulus Kies. (Heteroceridae), a beetle new to Britain. Entomologist''s Ree. J. Var. 82:232.