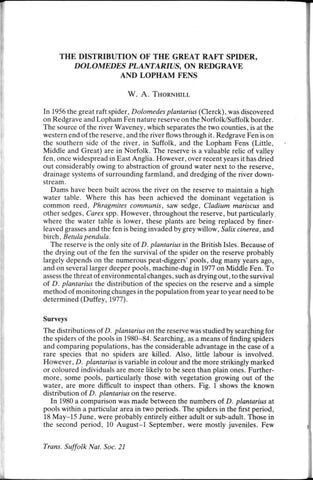 THE DISTRIBUTION OF THE GREAT RAFT SPIDER, DOLOMEDES PLANTARIUS, ON REDGRAVE AND LOPHAM FENS W . A . THORNHILL

In 1956 the great raft spider, Dolomedes plantarius (Clerck), was discovered on Redgrave and Lopham Fen nature reserve on the Norfolk/Suffolk border. T h e source of the river Waveney, which separates the two counties, is at the western end of the reserve, and the river flows through it. Redgrave Fen is on the southern side of the river, in Suffolk, and the L o p h a m Fens (Little, Middle and G r e a t ) are in Norfolk. The reserve is a valuable relic of Valley fen, once widespread in East Anglia. However, over recent years it has dried out considerably owing to abstraction of ground water next to the reserve, drainage systems of surrounding farmland, and dredging of the river downstream. D a m s have been built across the river on the reserve to maintain a high water table. W h e r e this has been achieved the dominant Vegetation is common r e e d , Phragmites communis, saw sedge, Cladium mariscus and other sedges, Carex spp. However, throughout the reserve, but particularly where the water table is lower, these plants are being replaced by finerleaved grasses and the fen is being invaded by grey willow, Salix cinerea, and birch, Betula pendula. T h e reserve is the only site of D. plantarius in the British Isles. Because of the drying out of the fen the survival of the spider on the reserve probably largely d e p e n d s on the numerous peat-diggers' pools, dug many years ago, and on several larger deeper pools, machine-dug in 1977 on Middle Fen. T o assess the threat of environmental changes, such as drying out, to the survival of D. plantarius the distribution of the species on the reserve and a simple method of monitoring changes in the population from year to year need to be determined ( D u f f e y , 1977). Surveys T h e distributions of D. plantarius on the reserve was studied by searching for the spiders of the pools in 1980-84. Searching, as a means of finding spiders and comparing populations, has the considerable advantage in the case of a rare species that no spiders are killed. Also, little labour is involved. H o w e v e r , D. plantarius is variable in colour and the more strikingly marked or coloured individuals are more likely to be seen than piain ones. Furthermore, some pools, particularly those with Vegetation growing out of the water, are m o r e difhcult to inspect than others. Fig. 1 shows the known distribution of D. plantarius on the reserve. In 1980 a comparison was m a d e between the numbers of D. plantarius at pools within a particular area in two periods. T h e spiders in the first period, 18 M a y - 1 5 J u n e , were probably entirely either adult or sub-adult. Those in the second period, 10 A u g u s t - 1 September, were mostly juveniles. Few

the stippled area. adults, particularly males, appear to survive beyond July. All the pools were visited at least twice in the first period and at least once in the second. Most pools were visited more often. The Visits were made on warm days and on all Visits spiders were seen at some pools. Figs. 2a and 2b show the largest number of D. plantarius seen at each pool during each Observation period. Some pools within the Observation area were amongst willow scrub. However, between the two Observation periods much of this scrub was removed. Figs. 2a and 2b show the extent of scrub during the two periods, and, hence, the amount removed. They show also that pools amongst the scrub were unattractive to D. plantarius and that the species appeared to rapidly invade the cleared area after scrub removal. No other preference for pools in a particular area, or of a particular type, was evident, e.g., shallow pools seemed as attractive as deep ones. On one occasion two adult spiders were seen at a small temporary pool (not illustrated in Figs. 2a and 2b) soon after its formation (by heavy rain), suggesting that the spiders move readily between pools. Discussion It is uncertain to what extent the three concentrations of population of D. plantarius can be regarded as separate. Between them are areas which are probably unsuitable for the dispersal of and colonization by D. plantarius. Trans. Suffolk Nat. Soc. 21

However, the spiders appear to move readily between pools and it is unlikely therefore that these populations are completely isolated from each other. The populations on Little and Middle Fens appear to be in no immediate danger of extinction. That on Little Fen, where there are many old peatdiggers' pools, is extensive and in 1980 seemed encouragingly large. Much of the willow scrub which encroached there in recent years has been removed. D. plantarius was first seen on the deep machine-dug pits on Middle Fen in 1980, three years after they were made - and several were seen. The species is less easily f o u n d elsewhere on Middle Fen although the rapid colonization of the machine-dug pits suggests that the species was already present on this area of the reserve when the pits were dug. The population on Redgrave Fen gives most cause for concern. It is scattered over an area of less than 1ha. The survival of the species within this area almost certainly depends on the existence of several small pools. The water table is lower than on Little Fen and, as a result, there has been extensive invasion by willow, birch and hawthorn scrub and by fine-leaved grasses. T h e spider was presumably present on Redgrave and Lopham Fens when the pools were dug, but the water table was then much higher and the pools were unnecessary for the spider's survival. Because there was more open water and the Vegetation was mostly coarse-leaved the spiders would have been able to move more easily amongst the Vegetation than today. T h e pools are probably now more vital to the survival of the spider. In a dry summer the only open water, apart f r o m the rivers and dykes, in the parts of the reserve which D. plantarius inhabits, is contained in the peat-diggers' or machinedug pools. Spiders were not seen at pools amongst the willow scrub. Possibly such pools are unsuitable because they receive less sun, and hence are unfavourable to the sun-loving spiders, and because such pools tend to be stagnant and devoid of aquatic life, some of which could be food for the spiders. However, as pools at the edge of the scrub also have no or very few spiders a more satisfactory explanation may be that the replacement of reeds and sedges by grasses m a k e s dispersal difficult. T h e rapid invasion of the cleared area, in which the Vegetation between the pools was well-trampled, supports this hypothesis. If the spiders frequently travel between pools, then in drier, grassier areas they would spend less time at the pools. Where grasses are dominant D. plantarius can probably only survive if the pools are densely concentrated, as in the area it inhabits on Redgrave Fen. By cutting Vegetation D. plantarius could readily be encouraged into some areas of the reserve it does not currently inhabit. A programme of scrub clearance is in progress and the distribution of the spider may expand. However, to ensure its survival by this means would require continual reserve m a n a g e m e n t and a more satisfactory Solution would be to raise the water table to former levels.

The Roman Tulip, Tulipa sylvestris L. Mr John Somerville of the Hall sent me details of an ancient colony of T. sylvestris at Newbourne. H e wrote: ' A s a child I remember there always being flowers, probably because the original colony was huge and longestablished, and we always knew them as " R o m a n tulips". T h e r e was a R o m a n settlement h e r e . ' T h e r e was a Single flower in 1984, the first for nearly 30 years. T h e bulbs were rescued when the original site, an old garden, was destroyed. T h e new site did not suit them and they were moved to another about ten years ago, where the bulbs have increased.

A Speedwell, Veronica sp. at Bamham A specimen of the Veronica first found at B a m h a m in July 1982 by Mr G r a h a m H u n t was recorded as V. spicata L., Spiked Speedwell, in the Transactions, 19, 367. It was then submitted to Dr S. M. Walters, former Director of the Botanic G a r d e n s , Cambridge. His reply, dated 22 A u g . 1984, states: 'I am sure this is not the native British V. spicata of the Breck. Leaf shape, toothing and hairiness all differ. What it should be called is another matter. It is presumably a V. spicata sens. lat. of garden origin.' T h e r e are plants and seedlings of garden origin appearing on this site of disturbed and tipped soil at B a m h a m . F. W. Simpson.

The distribution of the Great Raft Spider, Dolomedes plantarius, on Redgrave and Lopham Fens

The distribution of the Great Raft Spider, Dolomedes plantarius, on Redgrave and Lopham Fens