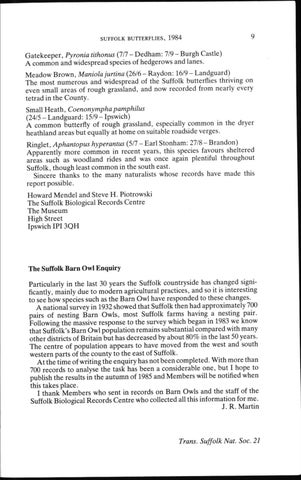 Gatekeeper, Pyronia tithonus (7/7 - Dedham: 7/9 - Burgh Castle) A common and widespread species of hedgerows and lanes. Meadow Brown, Maniola jurtina (26/6- Raydon: 16/9 - Landguard) The most numerous and widespread of the Suffolk butterflies thriving on even small areas of rough grassland, and now recorded from nearly every tetrad in the County. Small Heath, Coenonympha pamphilus (24/5 - Landguard: 15/9 - Ipswich) A common butterfly of rough grassland, especialy common in the dryer heathland areas but equally at home on suitable roadside verges. Ringlet, Aphantopus hyperantus (5/7 - Earl Stonham: 27/8 - Brandon) Apparently more common in recent years, this species favours sheltered areas such as woodland rides and was once again plentiful throughout Suffolk, though least common in the south east. Sincere thanks to the many naturalists whose records have made this report possible. Howard Mendel and Steve H. Piotrowski The Suffolk Biological Records Centre The Museum High Street Ipswich IPI 3QH

The Suffolk Barn Owl Enquiry Particularly in the last 30 years the Suffolk countryside has changed significantly, mainly due to modern agricultural practices, and so it is interesting to see how species such as the Barn Owl have responded to these changes. A national survey in 1932 showed that Suffolk then had approximately 700 pairs of nesting Barn Owls, most Suffolk farms having a nesting pair. Following the massive response to the survey which began in 1983 we know that Suffolk&#39;s Barn Owl population remains substantial compared with many other districts of Britain but has decreased by about 80% in the last 50 years. The centre of population appears to have moved from the west and south western parts of the county to the east of Suffolk. At the time of writing the enquiry has not been completed. With more than 700 records to analyse the task has been a considerable one, but I hope to publish the results in the autumn of 1985 and Members will be notified when this takes place. I thank Members who sent in records on Barn Owls and the staff of the Suffolk Biological Records Centre who collected all this information for me. J. R. Martin Trans. Suffolk Nat. Soc. 21

Acknowledgements I am most grateful to our President, Dr E. A. Ellis, for sending me details of the localities in Suffolk (and in other counties) where the lupin aphid has been found, and for his observations on predators attacking the pest. Dr M. B. Ellis determined the identity of the fungi. Reference Stroyan, H. L. G. (1981). A North American lupin aphid found in Britain. PI. Path., 30, 253. DrG. D. Heathcote, 2, St Mary&#39;s Square, Bury St Edmunds, IP33 2AJ

Plants Growing on Old Walls Mr J. Last, a botanist of Stowmarket, showed me Sedum dasyphyllum Thick-leaved Stonecrop, growing on the top of an old brick andflintwall at Rickinghall Inferior on 8 July, 1984. This is an uncommon plant. It is very likely the site seen by Hind and recorded for this parish in his Flora of 1889. The wall probably dates from the late 18th Century or early 19th and is now partly crumbling. Mrs A. G. Morgan informs me that Sempervivum tectorum L., Hous grows on the old wall of Cliff House, Shottisham. This is another member of the Crassulaceae. The previous owner of Cliff House informs Mrs Morgan that it was there 63 years ago when she married and came to live there. Church walls, in particular, are important habitats for some of our rare Suffolk ferns. Unfortunately many are being ruthlessly cleaned and sprayed with herbicides. Ferns do not damage to any extent the fabric of buildings. Their conservation is one important point to remember in the management of churchyards as nature reserves. In 1888, the Rev. Francis Galpin recorded Ceterach officinarum D Rusty-back fern, on the church wall at Mendham in his &#39;Account of the Flowering Plants of Harleston,&#39; but the fern was reported to have been destroyed during restoration work in 1970/71. I visited Mendham on 30 August 1984, accompanied by the Misses B. and R. Copinger Hill, and was dismayed tofindthat workmen were repairing the north side and had removed a healthy specimen of the Rusty-back fern. The Rector, who had not noticed any ferns in the previous seven years, climbed a ladder and had the fern replanted. I do not know if it survived. However, I did see one other specimen above the porch, but it was small and dried-up. Arriving on the very afternoon when the fern was being removed was an almost uncanny coincidence. F. W. Simpson. Trans. Suffolk Nat. Soc. 21

DrR. H. L. Disney, Field Studies Council Research Fellow, University Museum of Zoology, Department of Zoology, Downing Street, Cambridge CB2 3EJ Rare Breckland Plants Our many plant recorders will be interested to know that during 1983 hitherto unknown sites were discovered for several rare Breckland species. All were on private land. Thefindsincluded: Silene otites (L.) Wibel (Spanish Catchfly), Corynephorus canescen Beauv. (Grey Hairgrass), Bromus tectorum (L.) Nevski (Drooping Brome) and, most important of all, Scleranthus perennis L. subsp. prostratus Seil (Perennial Knawel). All were on grassy heath, with the exception of the Drooping Brome, which was on disturbed chalky sand. Thanks are due to Mrs G. Crompton for telling us of these interesting discoveries. E. M. Hyde. Trans. Suffolk Nat. Soc. 21

The Roman Tulip, Tulipa sylvestris L. Mr John Somerville of the Hall sent me details of an ancient colony of T. sylvestris at Newbourne. H e wrote: &#39; A s a child I remember there always being flowers, probably because the original colony was huge and longestablished, and we always knew them as &quot; R o m a n tulips&quot;. T h e r e was a R o m a n settlement h e r e . &#39; T h e r e was a Single flower in 1984, the first for nearly 30 years. T h e bulbs were rescued when the original site, an old garden, was destroyed. T h e new site did not suit them and they were moved to another about ten years ago, where the bulbs have increased.

A Speedwell, Veronica sp. at Bamham A specimen of the Veronica first found at B a m h a m in July 1982 by Mr G r a h a m H u n t was recorded as V. spicata L., Spiked Speedwell, in the Transactions, 19, 367. It was then submitted to Dr S. M. Walters, former Director of the Botanic G a r d e n s , Cambridge. His reply, dated 22 A u g . 1984, states: &#39;I am sure this is not the native British V. spicata of the Breck. Leaf shape, toothing and hairiness all differ. What it should be called is another matter. It is presumably a V. spicata sens. lat. of garden origin.&#39; T h e r e are plants and seedlings of garden origin appearing on this site of disturbed and tipped soil at B a m h a m . F. W. Simpson.

amount of work involved in the Recorder&#39;s job and it will greatly help if the work can be spread over the year. R. B. Warren 37 Dellwood Avenue Felixstowe I P 1 1 9 H N Fungi Battarraea phalloides (Dicks.) Pers. This rare fungus has been known to me for many years from a sandy bank at Blyford. The site is one of the County&#39;s verges protected by the Suffolk Trust. This fungus has a rigid, ochre-brown stem 10-25cm high, covered in shaggy fibres, seated in a membranous cup, and, when mature, is capped by a powdery rusty brown spore mass. I found two specimens on another sandy bank at Campsea Ash (TM35, v.c. 25) on 3 April 1984. These were exposed by the removal of a fallen tree. Later in the year two more specimens appeared. Dried specimens were shown to memb e r s a t the A G M . Coprinus radians (Desm.) Fr. While photographing a colony of the Winter Fungus or Velvet Foot (Flammulina velutipes) in the Alder Carr at Rushmere, near Ipswich, I noticed an unusual reddish-brown mossy mycelium on a fallen elm and also spreading over surrounding dead leaves. After searching my books for information without success I sent specimens to Dr E. A. Ellis, who identified it as C. radians. He writes: &#39;At one time it was given a separate name in Mycelia sterilia, being known as Ozonium auricomum, until its connection with Coprinus was recognised. It is common on decaying elm logs lying in damp places.&#39; Perhaps I have not been observant enough in the past! When a photograph of this fungus was shown at the Society&#39;s A G M Mr E. Milne-Redhead commented that he had also seen the fungus growing on elm logs recently. F. G. Simpson. Rhodotus palmatus (Bull, ex Fr.) Maire syn. Pleurotus palmatus (Bull, ex Fr.) Quel. Because of the large number of dead elms in the county resulting from the attack of Dutch elm disease some fungi have become more abundant recently. R. palmatus was once considered rare, but I saw it twice in 1984, most recently on dead elms at the Rodbridge picnic site north of Sudbury on 30 October. This is a very attractive apricot coloured fungus up to 10cm across, with an inrolled margin and pink tinged gills. Unfortunately, although it has a pleasant smell, it is not edible. Hericium ramosum (Merat) Letellier. This fungus appears as a whitish cushion covered with spines and, although far from attractive looking, is edible. A mass of this unusual fungus appeared on a horse chestnut log used as a temporary Support for a display case in the Museum at Mildenhall. This must be one of the most extraordinary habitats for a fungus. G. D. Heathcote. Trans. Suffolk Nat. Soc. 21

Forsythia - a correction The Forsythia recorded in The Flora of Suffolk&#39; as formally growing in a hedge and copse between Bury St Edmunds and Fornham was incorrectly determined as Forsythia europaea Degen &amp; Bald. Flowering specimens f this site introduced into my garden have been determined by Dr A. C. Leslie as F. suspenso (Thunb.) Vahl, a Chinese species. F. europaea has flowers, almost untoothed leaves and, above all, laminate pith. Other botanists may have fallen into this error. Forsythia, also known as the Golde Bell shrub, was named after Wm. Forsyth (1737-1805), a Superintendent of the Royal Gardens, Kensington. F. W. Simpson. Trans. Suffolk Nat. Soc. 21

Unusual Fungus from Brightwell In the autumn of 1984 Mrs E . Coe of Brightwell, Ipswich brought to Ipswich Museum a fungus that she had found growing in her garden and along an adjacent woodland edge. It consisted of a network of white branches forming a hollow ball about tennis ball size. The branches were covered in dark olive green slime and it had a very strong, unpleasant smell. This fruiting body arose f r o m an &#39;egg stage&#39;. These characters pointed to it being related to the Stinkhorn, Phallus impudicus Pers., however, no mention of it could be found in any of the Standard reference books and it baffled local mycologists. The preserved specimen and a photograph were, therefore, sent to D r Derek Reid of the Royal Botanic Gardens, Kew. H e identified it as Illeodictyon cibarius Tul., a species from the Southern Hemisphere which is found in Australasia and South America. It appears to have been introduced accidently to Britain and has previously only been recorded f r o m Surrey, where it was first reported in 1956 in a garden in H a m p t o n (Reid &amp; Dring, 1964). It has since spread locally to the Thames Ditton area. Mrs Coe remembers seeing the fungus in previous years and there is good reason to believe this is a completely separate introduction that is now well established in the area. The specimen has been retained at Kew. Reid, D . A . &amp; Dring, D . M. (1964). Trans. Brit. Myc. Soc. 47, 293. Carol A . Green The M u s e u m , High Street, Ipswich IP1 3 Q H 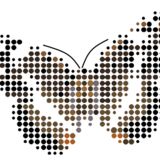