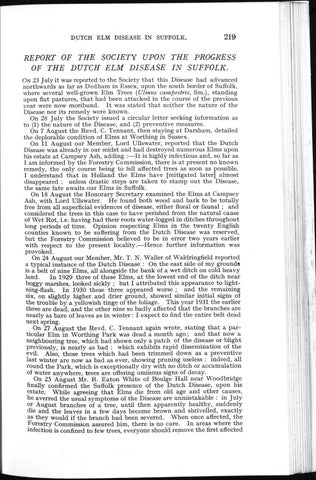 REPORT OF THE SOCIETY UPON THE PROGRESS OF THE DUTCH ELM DISEASE IN SUFFOLK.

ON 23 July it was reported to the Society that this Disease had advanced northwards as far as Dedham in Essex, upon the south border of Suffolk, where several well-grown Elm Trees (Ulmus campestris, Sm.), Standing upon flat pastures, that had been attacked in the course of the previous year were now moribund. Xt was stated that neither the nature of the Disease nor its remedy were known. On 28 July the Society issued a circular letter seeking information as to (1) the nature of the Disease, and (2) preventive measures. On 7 August the Revd. C. Tennant, then staying at Darsham, detailed the deplorable condition of Elms at Worthing in Sussex. On 11 August our Member, Lord Ullswater, reported that the Dutch Disease was already in our midst and had destroyed numerous Elms upon his estate at Campsey Ash, adding :â&#x20AC;&#x201D;It is highly infectious and, so far as I am informed by the Forestry Co mmission, there is at present no known remedy, the only course being to feil affected trees as soon as possible. I understand that in Holland the Elms have [mitigated later] almost disappeared : unless drastic steps are taken to stamp out the Disease, the same fate awaits our Elms in Suffolk. On 18 August the Honorary Secretary examined the Elms at Campsey Ash, with Lord Ullswater. He found both wood and bark to be totally free from all superficial evidences of disease, eitherfloralor faunal ; and considered the trees in this case to have perished from the natural cause of Wet Rot, i.e. having had their roots water-logged in ditches throughout long periods of time. Opinion respecting Elms in the twenty English counties known to be suffering from the Dutch Disease was reserved, but the Forestry Commission believed to be in error two years earlier with respect to the present locality.â&#x20AC;&#x201D;Hence further information was provoked. On 24 August our Member, Mr. T. N. Waller of Waldringfield reported a typical instance of the Dutch Disease : On the east side of my grounds is a belt of nine Elms, all alongside the bank of a wet ditch on cold heavy land. In 1929 three of these Elms, at the lowest end of the ditch near boggy marshes, looked sickly ; but I attributed this appearance to lightning-flash. In 1930 these three appeared worse ; and the remaining six, on slightly higher and drier ground, showed similar initial signs of the trouble by a yellowish tinge of the foliage. This year 1931 the earlier three are dead, and the other nine so badly affected that the branches are nearly as bare of leaves as in winter: I expect to find the entire belt dead next spring. On 27 August the Revd. C. Tennant again wrote, stating that a particular Elm in Worthing Park was dead a month ago; and that now a neighbouring tree, which had shown only a patch of the disease or blight previously, is nearly as bad : which exhibits rapid dissemination of the evil. Also, those trees which had been trimmed down as a preventive last winter are now as bad as ever, showing pruning useless : indeed, all round the Park, which is exceptionally dry with no ditch or accumulation of water anywhere, trees are offering ominous signs of decay. On 25 August Mr. R. Eaton White of Boulge Hall near Woodbridge finally confirmed the Suffolk presence of the Dutch Disease, upon his estate. While agreeing that Elms die from old age and other causes, he averred the usual symptoms of the Disease are unmistakable : in July or August branches of a tree, until then apparently healthy, suddenly die and the leaves in a few days become brown and shrivelled, exactly as they would if the branch had been severed. When once affected, the Forestry Commission assured him, there is no eure. In areas where the infection is confined to few trees, everyone should remove thefirstaffected

with all their branches : he had felled many, but was defeated for he could afford to do so no further. Mr. White adds the all-important nature of the Disease, showing it to destroy the Cambium-Layer between trunk and bark : The Disease is caused by a F U N G U S , Graphium ulmi, just inside the bark ; infected trees, when cut through, exhibit black dots, like dots that are raade by a leadpencil, all round the sap-wood near the bark. Diseased trees can be distinguished in the timber-yard by the very strong smell arising from the wood while being sawn fodour not described]. There is no reason to suppose that timber derived from such trees is in any way inferior to normal ones ; the Fungus is not one that can decay the wood or weaken the fibre. On 3 September our Member, Mr. E. A. Ellis of Norwich Museum, reported the Disease to be still unknown in Norfolk ; nor have indications of its presence been detected by us in either the north or west of Suffolk. Later in the month, Mr. Mavfield stated the fungus, Ulmi, to have been first described by Schwarz ; considered its spores probably disseminated by both wind and insects, possibly by means of cracks or wounds about the bark or twigs, into healthy trees ; ascertained that the Board of Agriculture was not concerned with the subject ; and obtained a copy of the Forestry Commission's 1928 leaflet no. 19, upon ' The Dutch Elm Disease.' This Leaflet adds to the above facts merely that the attack is more obvious in trees under than Over forty years of age ; in older trees it is often confined to isolated branches, and the trunks survive. The brown spots, formed by the Fungus in cambium, are sometimes traceable downwards into the roots. A tree may appear perfectly healthy externally, and yet display internal signs of extensive infectation : " identification can be obtained only after examination in the laboratory, and depends upon successful isolation of the casual organism from the diseased wood." The fructification of the Fungus consists of a black stalk about one millimetre in length, which bears at the top a round drop of mucilage containing thousands of microscopic spores ; spores may also be formed directly from the mycelium. No details of what part of the tree is first attacked are known ; the mucilage-embedded spores are improbably distributed by wind, at least until dry, nor are insects known to convey them. On 14 September, Dr. Ticehurst considered the discovery of the method, by which the fungus finds ingress through the bark to the cambium, to be the crux of the matter. On 6 October Mr. Ovey said that " since 2nd I have noticed several dead or moribund Elms ; near Ixworth eight trees in a hedgerow were obviously in a very bad State, but the damp ditch at their roots may have been responsible for this condition." Much our furthest west Observation, but not shown to be Dutch Disease. On 21 September, our Member, Mr. Hincks, writes that all foreign efforts to exterminate the Fungus are abortive : in Germany and Switzerland much research has been effected, but attempted inoculation has been found nugatory : obviously control is most difficult. Acid Carbol, Li., diluted one in twenty, is still corrosive and likely to injure the tree rather than its Fungus ; the common disinfectant Crude Carbolic Acid would be cheaper and as useful. On 28 October he reported that both Prof. J . H. Priestley of Leeds University and Mr. G. N. Nelson, Ph.C., F.L.S., are prepared to do all in their power to exterminate the Suffolk curse; that the latter is preparing an experimental Solution ; and that Mr. Mason, F.R.M.S., Director of the local Biotechnicological Bureau, will send us similar solutions. The initial impediment is the difficulty of finding just what will destroy fungoid Plants and yet be innoxious to ulmaceous Plants. Thus our Society has all things well en train for the Dutch Disease's exstirpation in Suffolk.

Report upon the Dutch Elm Disease in Suffolk

Report upon the Dutch Elm Disease in Suffolk