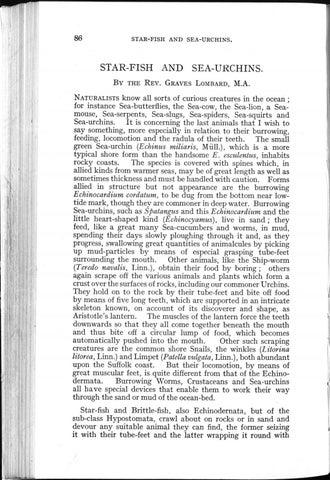 all sorts of curious creatures in the ocean ; for instance Sea-butterflies, the Sea-cow, the Sea-lion, a Seamouse, Sea-serpents, Sea-slugs, Sea-spiders, Sea-squirts and Sea-urchins. It is concerning the last animals that I wish to say something, more especialy in relation to their burrowing, feeding, locomotion and the radula of their teeth. The small green Sea-urchin (Echinus miliaris, MĂźll.), which is a more typical shore form than the handsome E. esculentus, inhabits rocky coasts. The species is covered with spines which, in allied kinds from warmer seas, may be of great length as well as sometimes thickness and must be handled with caution. Forms allied in structure but not appearance are the burrowing Echinocardium cordatum, to be dug from the bottom near tide mark, though thev are commoner in deep water. Burrowing Sea-urchins, such as Spatangus and this Echinocardium an little heart-shaped kind (Echinocyamus), live in sand ; they feed, like a great many Sea-cucumbers and worms, in mud, spending their days slowly ploughing through it and, as they progress, swallowing great quantities of animalcules by picking up mud-particles by means of especial grasping tube-feet surrounding the mouth. Other animals, like the Ship-worm (:Teredo navalis, Linn.), obtain their food by boring; others again scrape off the various animals and plants which form a crust over the surfaces of rocks, including our commoner Urchins. They hold on to the rock by their tube-feet and bite off food by means offivelong teeth, which are supported in an intricate skeleton known, on account of its discoverer and shape, as Aristotle's lantern. The muscles of the lantern force the teeth downwards so that they all come together beneath the mouth and thus bite off a circular lump of food, which becomes automatically pushed into the mouth. Other such scraping creatures are the common shore Snails, the winkles (Litorina litorea, Linn.) and Limpet (Patella vulgata, Linn.), both abundant upon the Suffolk coast. Bat their locomotion, by means of great muscular feet, is quite different from that of the Echinodermata. Burrowing Worms, Crustaceans and Sea-urchins all have special devices that enable them to work their way through the sand or mud of the ocean-bed. Star-fish and Brittle-fish, also Echinodernata, but of the sub-class Hypostomata, crawl about on rocks or in sand and devour any suitable animal they can find, the former seizing it with their tube-feet and the latter wrapping it round with

their very active arms. In both cases the prey is carried to the mouth and swallowed ; but the common Star-fish (Uraster rubens, Linn.) is able also to feed upon creatures much larger than itself by the simple and convenient process of protruding its stomach over any animal t h a t it cannot swallow. They consume great numbers of bivalve Shell-fish, above which they hunch their bodies and gradually force the shell-valves open by a continuous pulling action of their tube-feet ; for, though the occlusing muscles of the Mollusc are much more powerful than these tube-feet, they soon tire, the sustained pull of the Starfish finally conquers, and the shell begins to gape. Through the orifice the former intrudes its stomach, which probably first poisons and later certainly digests its soft prey's body. This habit causes Star-fish to be the greatest pest upon beds of Oysters (Ostrea edulis, Linn.) and Musseis (Mytilus edulis, Linn.) ;* also they digest the apparently invulnerable Seau r c h i n ' b y similarly forcing their stomachs down its throat, quite regardless of its teeth. Our Urchins possess a characteristic feeding-apparatus, consisting of a long and horny ribbon, made of many rows of fine teeth, termed the radula or lingual ribbon. It is supported by a sustaining framework, over which it is drawn backwards and forwards like a rope over a pulley. The whole mechanism can be withdrawn into the mouth when at rest, but in usage it is pushed out against the food which it rasps away by continuous sawing movement, eacli piece being pulled back into the mouth and there further chewed by the jaws before being finally swallowed. This radula is perpetually wearing away, but is just as steadilv replaced by new material added to the hmd end of the ribbon. Many shore animals, as we have seen, are attached to rocks or weed, or eise live in permanent tubes or burrows ; the advantage of these sheltered modes of life becomes clear when we consider the constant beating of the waves at varving height upon the shore. Of equal utility is the burrowing habit of some Urchins and bi-valve Shells, which also are able to move about beneath the surface. Locomotion in litoral creatures takes many forms : the larger Crustaceans clamber over rocks and through gullies b y means of their strongly hinged walking-legs ; and Star-fish move steadily over these surfaces by the concerted action of many tiny tube-feet, * " N u m b e r s of Star-fishes, Uraster rubens, were washed ashore a t Gorleston d u r i n g s t r o n g east w i n d in first week of N o v e m b e r , 1901 " (Trans. N o r f o l k N a t . Soc. vii, p. 398). A n incursion of Star-fish in 1906 e r a d i c a t e d a considerable bed of t h e mussei Volsella modiolus, Linn., n o r t h of t h e Bell B u o y , which h a d existed a few y e a r s before ; b u t in 1906 e m p t y v a l v e s alone were dredged b y s h r i m p - b o a t s a n d t h e Scoter D u c k s (CEdemia nigra, Linn.), whose feeding-ground t h e b e d h a d been, m o v e d t o s o u t h of G o r l e s t o n (lib. cit. viii, p . 4 6 4 ) . â&#x20AC;&#x201D; E d .

each terminated by a small sucker, double rows of such feet lining the grooves which run down the middle of the underside of each limb. Throughout the surface of all Urchins' shells are little clawed spines of various patterns but usually having three teeth that can open and snap together ; they are very numerous in the splendid Clypeaster rosaceus, Linn., a West Indian species. These are used to clean the shell by removing any fragment of waste matter ; but also for protection : if an Urchin be attacked, the long spines upon the threatened side turn away, exposing the shorter clawed spines beneath, which snap at any part of the attacker, and also produce a poison that passes into the wounds thus caused. Surely we can but marvel at the wonderful provision Nature arranges, generally in the way of sustenance and of protection from extraneous assaults, a protection particularly specialised in the case of Sea-urchins.f