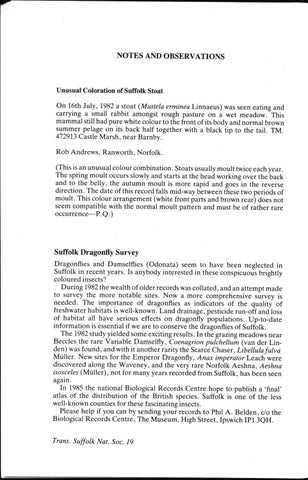 Unusual Coloration of Suffolk Stoat On 16th July, 1982 a stoat (Mustela erminea Linnaeus) was seen eating and carrying a smali rabbit amongst rough pasture on a wet meadow. This mammal still had pure white colour to the front of its body and normal brown summer pelage on its back half together with a black tip to the tail. TM. 472913 Castle Marsh, near Barnby. Rob Andrews, Ranworth, Norfolk. (This is an unusual colour combination. Stoats usually moult twice each year. The spring moult occurs slowly and starts at the head working over the back and to the belly, the autumn moult is more rapid and goes in the reverse direction. The date of this record falls mid-way between these two periods of moult. This colour arrangement (white front parts and brown rear) does not seem compatible with the normal moult pattern and must be of rather rare occurrence—P. Q.)

Suffolk Dragonfly Survey Dragonflies and Damselflies (Odonata) seem to have been neglected in Suffolk in recent years. Is anybody interested in these conspicuous brightly coloured insects? Düring 1982 the wealth of older records was collated, and an attempt made to survey the more notable sites. Now a more comprehensive survey is needed. The importance of dragonflies as indicators of the quality of freshwater habitats is well-known. Land drainage, pesticide run-off and loss of habitat all have serious effects on dragonfly populations. Up-to-date information is essential if we are to conserve the dragonflies of Suffolk. The 1982 study yielded some exciting results. In the grazing meadows near Beccles the rare Variable Damselfly, Coenagrion pulchellum (van der Linden) was found, and with it another rarity the Scarce Chaser, Libellula fulva Müller. New sites for the Emperor Dragonfly, Anax imperator Leach were discovered along the Waveney, and the very rare Norfolk Aeshna, Aeshna isosceles (Müller), not for many years recorded from Suffolk, has been seen again. In 1985 the national Biological Records Centre hope to publish a 'final' atlas of the distribution of the British species. Suffolk is one of the less well-known counties for these fascinating insects. Please help if you can by sending your records to Phil A. Beiden, c/o the Biological Records Centre, The Museum, High Street, Ipswich IP1 3QH. Trans. Suffolk Nat. Soc. 19

A TALE OF TWO WHALES

Bat versus Bird At dusk on the evening of 17th August, 1982, Peter Lawson, George Maybury and myself were Walking South at Walberswick on the sleepers that take the public footpath through the reed bed; South East of us the wind p u m p was visible. A s we approached the end of the sleepers we heard a shrill continuous squeaking from above our heads. On looking up we saw a large bat, which we took to be a Noctule Aying at a height of 20 to 25 feet. T h e noise continued and at the time there was no apparent reason for it, but as we watched a bird the size of a sedge warbler dropped f r o m the bat. Falling at first like a stone the bird veered off to its right just before entering the reeds. It did not r e a p p e a r . T h e bat remained in our view for a short time afterwards but eventually disappeared North towards Walberswick village. A n d r e w Leverett

reported to him at Sycamore Farm, Swilland on 6th May, at Elmsett on 24th June, at Hadleigh on 2nd July, at Ipswich on 15th September, at Felixstowe on 29th September and at Monks Eleigh on 8th October. All three of these hawk moths were also widely reported in other parts of the country. On 25th August I found larvae of another migrant moth, Heliothis peltigera D. & S. bordered straw, on Walberswick beach feeding on sticky groundsel. An imago of this species came to my M. V. light on 19th September and on 26th September a specimen of Helicovera armigera HĂźbn. scarce bordered straw also came to my garden light trap. This is the third time I have had H. armigera at Walberswick. It is found in all five continents but is only a casual visitor to Britain. The larvae feed on many wild and cultivated plants including tomatoes, oranges, melons and cereals and are sometimes very destructive to crops. In the USA they are known as 'cotton boll worms'. In this country they are sometimes imported with tomatoes or oranges. Other migrant moths seen were Nomophila noctuella D. & S. rush veneer and Udea ferrugalis HĂźbn. rusty dot, both fairly numerous at Walberswick and elsewhere and also recorded by Mr. Watchman at Monks Eleigh. Finally, butterfly records included several observations of Colias croceus Geoff. clouded yellow, one by Mr. Eley at Nowton. Vanessa atalanta Linn, red admiral were around in good numbers everywhere with a fair sprinkling of Cynthiacardui Linn, painted lady reported by Mr. Eley, Mr. S. Pietrowski and others, and Polygonia c-album Linn, comma. Both Inachis io Linn, peacock and Aglais urticae Linn, small tortoiseshell were quite plentiful everywhere. Mr. Mendel of Ipswich Museum had reports of sightings of Nymphalispolychloros Linn, large tortoiseshell by Miss E. Mortimer at Earl Stonham on 30th July and by Dr. C. Grey-Wilson at Hitcham on Ist August. This species was reasonably plentiful in East Suffolk woods until 1954, when it suddenly became scarce everywhere in the country. Whether the reported sightings since are the result of immigration or the remnants of old colonies is a matter of conjecture. It is thought that the disappearance of this fine insect from all its old habitats may be due to climatic changes. H. E . Chipperfield, F . R . E . S . , Walberswick, Suffolk.

More white-berried spindle! Following my report on this unusual variety (see Trans. Suffolk Nat. Soc. 18, 320), Dr. G. D . Heathcote wrote to say that he too came across spindle (Euonymus europaeus) with white berries in December 1982 while looking for eggs of 'blackfly' (Aphis fabae). It was growing on rough ground near Herringswell in West Suffolk. Professor M. J. Way of Imperial College, London, told Dr. Heathcote that he noticed this abnormal form for the first time in 1982, at Puriton in Somerset, but that he did not know if it bred true or was caused by the particular conditions in 1982. E . M. Hyde

Grey Seal DĂźring J u n e and July 1982 a solitary Grey Seal (Halichoerus grypus Fabricius) was observed in the coastal area of Minsmere. It hauled out onto the concrete sluice-outfiow structure and on 16th June was in obvious moult. This was probably its second moult and one presumes the pinniped was born at Scroby Sands some nineteen or twenty months previously. It would feed busily and on several occasions travelled, at high tide, the h u n d r e d or so metres of pipe f r o m the sea onto the actual sluice gate. Observers claimed that it was seen to consume freshwater morsels such as rudd and toad whilst in this enclosure. Peter Quinn

Shoreline discoveries at Dunwich After strong southeasterly winds considerable heaps of seaweed were piled up on the shingle at Dunwich on 8th November 1982. Amongst the usual wrack species were two seaweeds of more distant distribution: Cystoseira baccata (Gmelin) Silva apparently not common east of the English Channel and Sargassum muticum Yendo which is spreading around southern coasts of Britain after first having been noticed in 1973 at the Isle of Wight. (Spp. identified by Mr. I. Tittley (British Museum N. H.)) On several items of litter were Clusters of Goose Barnaclesâ&#x20AC;&#x201D; Lepas anatifera Linnaeus. A discarded cylinder possessed about 100 living individuals with a similar number cemented via stalks on to a Portuguese wine bottle. Several possessed bodies (with platelike shells) of 4 cm length and stalks of some 10 cm. On another isolated crustacean of the same species were found the acorn barnacle Elminius modestus Darwin and the living serpulid worm Hydroides norvegica Gunnerus. Peter Quinn

Lakenheath, in M. G. Rutterford's chicken run, with other com aliens, TL 78, v.c. 26, Mrs. B. Welch, 23/6/1954. Comm. Miss R. C. Sedergreen and conf. E. J. Clement, Nov. 1982. Hb. B. M. First Suffolk record. Introduced into Britain 1724. This species was cultivated in Dr. Coyte's Botanic garden at Ipswich, in 1796. Although this is a much earlier record, we can hardly claim it to be the first when compiling a County Flora, as it was listed as being cultivated. The English name given by Dr. Coyte was Forked Mouse-ear.