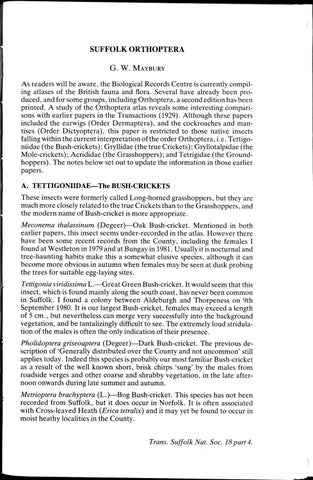 As readers will be aware, the Biological Records Centre is currently compiling atlases of the British fauna andflora.Several have already been produced, and for some groups, including Orthoptera, a second edition has been printed. A study of the Orthoptera atlas reveals some interesting comparisons with earlier papers in the Transactions (1929). Although these papers included the earwigs (Order Dermaptera), and the cockroaches and mantises (Order Dictyoptera), this paper is restricted to those native insects falling within the current interpretation of the Order Orthoptera, i. e. Tettigoniidae (the Bush-crickets); Gryllidae (the true Crickets); Gryllotalpidae (the Mole-crickets); Acrididae (the Grasshoppers); and Tetrigidae (the Groundhoppers). The notes below set out to update the information in those earlier papers. A. TETTIGONIIDAE—The BUSH-CRICKETS These insects were formerly called Long-horned grasshoppers, but they are much more closely related to the true Crickets than to the Grasshoppers, and the modern name of Bush-cricket is more appropriate. Meconema thalassinum (Degeer)—Oak Bush-cricket. Mentioned in both earlier papers, this insect seems under-recorded in the atlas. However there have been some recent records from the County, including the females I found at Westleton in 1979 and at Bungay in 1981. Usually it is nocturnal and tree-haunting habits make this a somewhat elusive species, although it can become more obvious in autumn when females may be seen at dusk probing the trees for suitable egg-laying sites. Tettigonia viridissima L.—Great Green Bush-cricket. It would seem that this insect, which is found mainly along the south coast, has never been common in Suffolk. I found a colony between Aldeburgh and Thorpeness on 9th September 1980. It is our largest Bush-cricket, females may exceed a length of 5 cm., but nevertheless can merge very successfully into the background Vegetation, and be tantalizingly difficult to see. The extremely loud stridulation of the males is often the only indication of their presence. Pholidoptera griseoaptera (Degeer)—Dark Bush-cricket. The previous description of 'Generally distributed over the County and not uncommon' still applies today. Indeed this species is probably our most familiar Bush-cricket as a result of the well known short, brisk chirps 'sung' by the males from roadside verges and other coarse and shrubby Vegetation, in the late afternoon onwards during late summer and autumn. Metrioptera brachyptera (L.)—Bog Bush-cricket. This species has not been recorded from Suffolk, but it does occur in Norfolk. It is often associated with Cross-leaved Heath (Erica tetralix) and it may yet be found to occur in moist heathy localities in the County. Trans. Suffolk Nat. Soc. 18part4.

Metrioptera roeselii (Hagenbach)—Roesel's Bush-cricket. Although not included as occurring in Suffolk in the earlier papers, this species is found in areas of lush grassy Vegetation in the south of the County. I have also found it at Benacre. Conocephalus dorsalis (Latreille)—Short-winged Cone-head. A lover of moist localities, this species is widespread in Suffolk. It is not easy to see or to hear, and I suspect it may have been under-recorded. Leptophyes punctatissima (Bosc)—Speckled Bush-cricket. T h e previous description of "Frequent on low herbage throughout the County . . .' is probably true today. and indeed it is often found on garden plants. It is surely under-recorded in the Atlas, but as the song is virtually inaudible at a distance in excess of a metre it is a somewhat elusive species. B. GRYLLIDAE—The CRICKETS Gryllus campestris L.—Field Cricket. The author of The Orthoptera of Suffolk wrote 'Taken by me in the neighbourhood of Tostok' (Tuck, v.v. May 1907). Needs confirmation. There have been no recent records anywhere apart from Sussex, and the Field Cricket is now protected under the provisions of the Wildlife and Countryside Act of 1981. A n unsuccessful attempt was made to reintroduce the species into west of the County on a Suffolk Trust for Nature Conservation reserve in 1978. C. GRYLLOTALPIDAE—The MOLE-CRICKETS Gryllotalpa gryllotalpa (L.)—Mole-cricket. Although there are records for Suffolk. the last seems to have been at Dallinghoo in 1858. It is many years since the species has been recorded here and it must be considered extinct in this County. The Mole Cricket is also protected under the Wildlife and Countryside Act of 1981. D. ACRIDIDAE—The GRASSHOPPERS Stethophyma grossum (L.)—Large Marsh Grasshopper. Said to be extinct in The O r t h o p t e r a of Suffolk. There have been no records from East Anglia in the post 1961 period, and it is doubtful if this species could be found in Suffolk now. Stenobothrus lineatus (Panzer)—Stripe-winged Grasshopper. Mentioned in both earlier papers, this species is to be found in the west of the County. I also took a specimen (now in B.M.) on 18th August 1979 at Westleton Heath. I found a f u r t h e r two males in that vicinity on lOth September 1981. From the earlier papers it would appear to have declined in the east. Omocestus rufipes (Zetterstedt)—Woodland Grasshopper. In T h e Orthoptera of Suffolk this species was described as 'Apparently not common.' Records were given for Lowestoft and Barnby Broad in 1898, and singles in Bentley and Dodnash Woods. In fact there have been no post 1961 Atlas

records from East Anglia, apart from one 10km. Square in the Chelmsford region. It is almost certain that the earlier records were based on misidentified specimens. Omocestus viridulus (L.)—Common Green Grasshopper. One of the commoner species in the County. As the name suggests this grasshopper is often green, and it lacks the reddish colouring on the abdomen found on mature adults of most British species. The song of an isolated male is a loud and prolonged 'ticking' noise, lasting usually about 20 seconds and ending abruptly. Myrmeleotettix maculatus (Thunberg)—Mottled Grasshopper. The earlier comment of 'Abundant everywhere in arid situations' still applies. It is a small grasshopper with the antennae distinctly clubbed in the male and thicked at the tip in the female. It is extremely variable in colour. Gomphocerippus rufus (L.)—Rufous Grasshopper. In The Orthoptera of Suffolk records were given for Potters Bridge near Southwold, and on the Poors Heath in West Tuddenham. This species, however, has a streng preference for limestone and I doubt that it did actually occur in the County. Certainly all the Atlas records are well south or west of Suffolk. Chorthippus albomarginatus (Degeer)—Lesser Marsh Grasshopper. When The Orthoptera of Suffolk was written this species had not been recorded in the south of the County. No new records were added in Orthoptera of Suffolk revised. In fact the Lesser Marsh Grasshopper has an interesting distribution, being found on low-lying grassland near the coast in both north and south Suffolk, and also in the drier sandy Breck. This species is perhaps best identified by the straight, or only slightly incurved, side-keels of the pronotum. Chorthippus brunneus (Thunberg)—Common Field Grasshopper. The earlier comment of 'Abundant in every hedgerow throughout the County' is today perhaps a slight over exaggeration, but it is very common. It is a medium to fairly large grasshopper with several colour variations. The song is a short rather brisk chirp lasting less than half a second. A chirp will often stimulate an immediate reply from one or more other males close by. Chorthippus parallelus (Zetterstedt)—Meadow Grasshopper. Widespread and common, this grasshopper is perhaps the easiest to identify due to the vestigial hind wings. The song comprises a burst of stridulation lasting 1 - 3 seconds. E. TETRIGIDAE—The GROUND-HOPPERS Tetrix subulata (L.)—Slender Ground-hopper. This species was said to be 'Confined to the fens'. There are some recent records in the Atlas, and it has also been found at Little Cornard, but I am sure it is under recorded in Suffolk. Tetrix undulata (Sowerby)—Common Ground-hopper. The Orthoptera of Suffolk states 'Abundant in the driest situations throughout the County'. The Trans. Suffolk Nat. Soc. 18 part 4.

Atlas records and my own experiences would tend towards the view that this insect is not common. It is surely under recorded, being rather elusive. There is a recent record from Cornard Mere. As even a glance at the Atlas will reveal, much of Suffolk remains to be surveyed. Any reader who wishes to contribute records can pass them to me or, alternatively, they can be sent direct to the National Recorder, Mr. E. C. M. Haes at 45 Grove Road, Worthing, Sussex, B N 1 4 9 D Q . All records will be gratefully received. Readers who wish to learn more of these insects, including the means of identification of all the British species, are advised to consult Ragge (1965). Sadly this book is out of print and seldom available secondhand. However, copies are often available from public libraries. Acknowledgements My thanks are due to Christopher Haes for kindly commenting on an earlier draft of this paper. References Anon. (1929). The Orthoptera of Suffolk. Trans. Suffolk Nat. Soc. 1, 92. A n o n . (1946). O r t h o p t e r a of Suffolk Revised. Trans. Suffolk Nat. Soc. 6, 82. Chinery, M. (1973). A Field Guide to the Insects of Britain and Northern Europe p p 78-88. Collins. Haes, E . C. M. (1979). Provisional Atlas of the Insects of the British Isles Part 6 Orthoptera. Institute of Terrestrial Ecology. Ragge, D . R . (1965). Grasshoppers, Crickets and Cockroaches ofthe British Isles. Warne. Ragge, D . R . (1973). The British Orthoptera: A Supplement. Entomologist's Gaz. 24, 227. G . W. Maybury, 12 Mountbatten Road, Bungay, NR35 1PN.