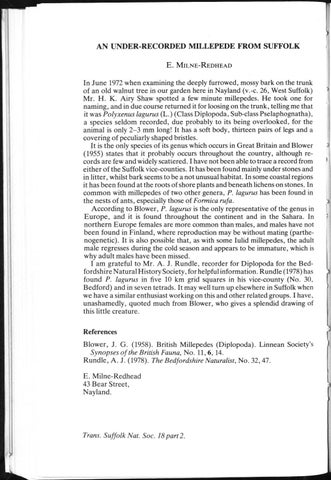 AN UNDER-RECORDED MILLEPEDE FROM SUFFOLK

E. M i l n e - R e d h e a d In June 1972 when examining the deeply furrowed, mossy bark on the trunk of an old walnut tree in our garden here in Nayland (v.-c. 26, West Suffolk) Mr. H. K. Airy Shaw spotted a few minute millepedes. He took one for naming, and in due course returned it for loosing on the trunk, telling me that it was Polyxenus lagurus (L.) (Class Diplopoda, Sub-class Pselaphognatha), a species seldom recorded, due probably to its being overlooked, for the animal is only 2 - 3 mm long! It has a soft body, thirteen pairs of legs and a covering of peculiarly shaped bristles. It is the only species of its genus which occurs in Great Britain and Blower (1955) states that it probably occurs throughout the country, although records are few and widely scattered. I have not been able to trace a record from either of the Suffolk vice-counties. It has been found mainly under stones and in litter, whilst bark seems to be a not unusual habitat. In some coastal regions it has been found at the roots of shore plants and beneath lichens on stones. In common with millepedes of two other genera, P. lagurus has been found in the nests of ants, especially those of Formica rufa. According to Blower, P. lagurus is the only representative of the genus in Europe, and it is found throughout the continent and in the Sahara. In northern Europe females are more common than males, and males have not been found in Finland, where reproduction may be without mating (parthenogenetic). It is also possible that, as with some Iulid millepedes, the adult male regresses during the cold season and appears to be immature, which is why adult males have been missed. I am grateful to Mr. A. J. Rundle, recorder for Diplopoda for the BedfordshireNatural HistorySociety, forhelpfulinformation. Rundle (1978) has found P. lagurus in five 10 km grid squares in his vice-county (No. 30, Bedford) and in seven tetrads. It may well turn up elsewhere in Suffolk when we have a similar enthusiast working on this and other related groups. I have, unashamedly, quoted much from Blower, who gives a splendid drawing of this little creature. References Blower, J. G. (1958). British Millepedes (Diplopoda). Linnean Society's Synopses of the British Fauna, No. 11, 6, 14. Rundle, A. J. (1978). The Bedfordshire Naturalist, No. 32, 47. E. Milne-Redhead 43 Bear Street, Nayland.

An under-recorded millipede from Suffolk

An under-recorded millipede from Suffolk