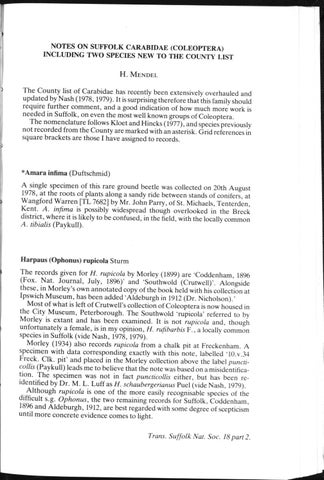 The County list of Carabidae has recently been extensively overhauled and updated by Nash (1978,1979). It issurprising therefore that this family should require further comment, and a good indication of how much more work is needed in Suffolk, on even the most well known groups of Coleoptera. The nomenclature follows Kloet and Hincks (1977), and species previously not recorded from the County are marked with an asterisk. Grid references in Square brackets are those I have assigned to records.

*Amara infima (Duftschmid) A Single specimen of this rare ground beetle was collected on 20th August 1978, at the roots of plants along a sandy ride between stands of conifers at Wangford Warren [TL 7682] by Mr. John Parry, of St. Michaels, Tenterden, Kent. A. infima is possibly widespread though overlooked in the Breck district, where it is likely to be confused, in the field, with the locally common A. tibialis (Paykull).

Harpaus (Ophonus) rupicola Sturm The records given for H. rupicola by Morley (1899) are 'Coddenham, 1896 (Fox. Nat. Journal, July, 1896)' and 'Southwold (Crutwell)'. Alongside these, in Morley's own annotated copy of the book held with his collection at Ipswich Museum, has been added 'Aldeburgh in 1912 (Dr. Nicholson).' Most of what is left of Crutwell's collection of Coleoptera is now housed in the City Museum, Peterborough. The Southwold 'rupicola' referred to by Morley is extant and has been examined. It is not rupicola and, though unfortunately a female, is in my opinion, H. rufibarbis F., a locally common species in Suffolk (vide Nash, 1978, 1979). Morley (1934) also records rupicola from a chalk pit at Freckenham. A specimen with data corresponding exactly with this note, labelled TO.v.34 Freck. Clk. pit' and placed in the Morley collection above the label puncticollis (Paykull) leads me to believe that the note was based on a misidentification. The specimen was not in fact puncticollis either, but has been reidentified by Dr. M. L. Luff as H. schaubergerianus Puel (vide Nash, 1979). Although rupicola is one of the more easily recognisable species of the the two lao CUlt S'8' Â°Phonusâ&#x20AC;˘ remaining records for Suffolk, Coddenham, 1896 and Aldeburgh, 1912, are best regarded with some degree of scepticism until more concrete evidence comes to light. Trans. Suffolk Nat. Soc. 18 part 2.