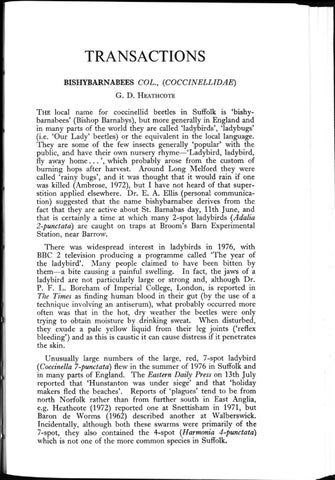 THE local name for coccinellid beetles in Suffolk is 'bishybarnabees' (Bishop Barnabys), but more generally in England and in many parts of the World they are called 'ladybirds', 'ladybugs' (i.e. 'Our Lady' beetles) or the equivalent in the local language. They are some of the few insects generally 'populär' with the public, and have their own nursery rhyme—'Ladybird, ladybird, fly away h o m e . . . w h i c h probably arose from the custom of burning hops after harvest. Around Long Melford they were called 'rainy bugs', and it was thought that it would rain if one was killed (Ambrose, 1972), but I have not heard of that superstition applied elsewhere. Dr. E. A. Ellis (personal communication) suggested that the name bishybarnabee derives from the fact that they are active about St. Barnabas day, l l t h June, and that is certainly a time at which many 2-spot ladybirds (Adalia 2-punctata) are caught on traps at Broom's Barn Experimental Station, near Barrow. There was widespread interest in ladybirds in 1976, with BBC 2 television producing a programme called 'The year of the ladybird'. Many people claimed to have been bitten by them—a bite causing a painful swelling. In fact, the jaws of a ladybird are not particularly large or strong and, although Dr. P. F. L. Boreham of Imperial College, London, is reported in The Times as finding human blood in their gut (by the use of a technique involving an antiserum), what probably occurred more often was that in the hot, dry weather the beetles were only trying to obtain moisture by drinking sweat. When disturbed, they exude a pale yellow liquid from their leg joints ('reflex bleeding') and as this is caustic it can cause distress if it penetrates the skin. Unusually large numbers of the large, red, 7-spot ladybird (iCoccinella 7-punctata) flew in the summer of 1976 in Suffolk and in many parts of England. T h e Eastern Daily Press on 13th July reported that 'Hunstanton was under siege' and that 'holiday makers fled the beaches'. Reports of 'plagues' tend to be from north Norfolk rather than from further south in East Anglia, e.g. Heathcote (1972) reported one at Snettisham in 1971, but Baron de Worms (1962) described another at Walberswick. Incidentally, although both these swarms were primarily of the 7-spot, they also contained the 4-spot (Harmonia 4-punctata) which is not one of the more common species in Suffolk.

Large numbers of ladybirds were commonly found well into the winter of 1976-77, the adults hibernating under dead leaves, in rabbit burrows and in houses, but they could also be found stationary, scattered on bushes in sheltered woodland, giving the appearance of hawthorn berries. Many died in the cold, wet months that followed. T h e general name 'ladybird' Covers a widely-distributed group of beetles of which more than 3,000 species are known, and there are forty-two species found in Britain. Most are named according to the number of spots on the commonest form of the species. Of course adult beetles cannot grow, nor does the number of spots increase with age as is popularly supposed but, as the number of spots on individuals of a single species can vary considerably, other features have to be used to identify them with certainty. Young adults of the species which are red with black spots may be pale yellow and lack spots when they emerge from their pupal case, but they develop the adult colours within a few hours. T h e 2-spot ladybird is particularly variable in colour pattern. It is usually red with black spots, but it may be black with red spots and the proportion of the population that are predominantly black ('melanics') varies with the region. In Manchester and in Glasgow, where there is considerable industrial pollution, up to 95% of the population are black, but the proportion of melanics has decreased with the pollution in recent years (Creed, 1975). T h e red forms predominate in Suffolk. At Broom's Barn, ladybirds regularly hibernate between doors and door frames of two little-used entrances to the buildings, and almost exclusively 2-spots, e.g. in 1976 there was only one 7-spot and three 11-spot ladybirds (Coccinella 11-punctata) and none of them was close to 2-spot individuals. Each species gives off a characteristic odour (a 'pheromone') which encourages them to 'aggregate' at suitable sites. T h e melanics formed less than one per cent of the population in recent years, e.g. in 1971, 180 beetles were examined and 175 were typical red ones with a single black spot on each wing case, one was black with red spots (var. 6-pustulata), one had one small extra black spot on each wing case (var. stephensi) and three had the black spot extended sideways (var. rubiginosa). In 1976, 659 were examined; 656 were typical, one was black with four red spots (var. 4-maculata), there was one var. rubiginosa and one had irregulĂ¤r black spots similar to var. annulata. As all colour forms are distasteful to birds there should be no selective loss from predation, although the 'warning colour' is more obvious in the beetles which are predominantly red. A possible reason for the melanics being at an advantage in certain regions is that they will absorb heat more readily than the red form and therefore can be more active in cool weather (Muggleton, Lonsdale & Benham, 1975).

The life history of ladybirds varies from species to species, e.g. the 2-spot generally has two generations each year ('multivoltine') in England whereas the 7-spot has only one ('univoltine'), and so conditions which favour one species will not necessarily favour another. Their relative abundance may differ from year to year, but both 7-spots and 2-spots were common in Suffolk in 1971, 1975 and in 1976. The fluctuations in the numbers of 2-spots hibernating at Broom's Barn are interesting in relation to the number of aphids found in the following season, even if they do not reflect the numbers of all ladybird species. Aphids are the normal prey of most ladybirds, although there is one plant-feeding species (Subcoccinella 24-punctata) in Britain which occasionally becomes a pest to gardeners, and another (Thea 22-punctata) which is quite common in Suffolk, which feeds upon mildew and therefore aids the gardener. The 2-spot tends to feed on aphids infesting low bushes (Ipertini, 1966) and is therefore the ladybird most likely to control the black bean aphid (Aphis fabae group) which overwinters as eggs on spindle bushes, hatches in spring and multiplies there before moving to attack our beans or sugar-beet crops. A. 2-punctata overwintering and numbers of s o m e winged aphids caught on a sticky trap at Broom's Barn in the following season A.

There is an obvious trend for the relative numbers of 'blackfly' in spring to decrease as the numbers of 2-spots overwintering increases, but this does not necessarily apply to all species of aphids, e.g. the peach-potato aphid ( M y z u s persicae), which is the 'greenfly' most likely to spread virus diseases in crops. Unfortunately 2-spots do not thrive when feeding on 'blackfly', laying only half as many eggs as when reared on 'greenfly' (Blackman, 1967). Some black aphids, e.g. Aphis sambuci which feeds upon eider, are actually poisonous to ladybirds. If ladybirds are active when aphids colonize crops they may have an appreciable effect on the development of the pest population. For example this is true of the 7-spot and sugar-beet crops (Heathcote, 1963), but control of an aphid population by a predator—one of its natural enemies—depends not only on its abundance, but also on its appetite, its activity and the relative