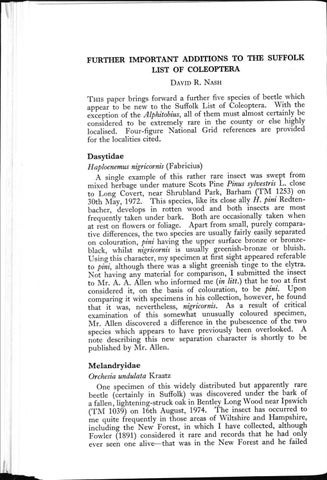 FURTHER IMPORTANT ADDITIONS TO THE SUFFOLK LIST OF COLEOPTERA DAVID R . NASH T H I S paper brings forward a further five species of beetle which appear to be new to the Suffolk List of Coleoptera. With the exception of the Alphitobius, all of them must almost certainly be considered to be extremely rare in the county or eise highly localised. Four-figure National Grid references are provided for the localities cited.

Dasytidae Haplocnemus nigricornis (Fabricius) A single example of this rather rare insect was swept from mixed herbage under mature Scots Pine Pinns sylvestris L. close to Long Covert, near Shrubland Park, Barham (TM 1253) on 30th May, 1972. This species, like its close ally IL pini Redten bacher, develops in rotten wood and both insects are most frequently taken under bark. Both are occasionally taken when at rest on flowers or foliage. Apart from small, purely comparative differences, the two species are usually fairly easily separated on colouration, pini having the upper surface bronze or bronzeblack, whilst nigricornis is usually greenish-bronze or bluish. Using this character, my specimen at first sight appeared referable to pini, although there was a slight greenish tinge to the elytra. Not having any material for comparison, I submitted the insect to Mr. A. A. Allen who informed me (in litt.) that he too at first considered it, on the basis of colouration, to be pini. Upon comparing it with specimens in his collection, however, he found that it was, nevertheless, nigricornis. As a result of critical examination of this somewhat unusually coloured specimen, Mr. Allen discovered a difference in the pubescence of the two species which appears to have previously been overlooked. A note describing this new Separation character is shortly to be published by Mr. Allen. Melandryidae Orchesia undulata Kraatz One specimen of this widely distributed but apparently rare beetle (certainly in Suffolk) was discovered under the bark of a fallen, lightening-struck oak in Bentley Long Wood near Ipswich (TM 1039) on 16th August, 1974. The insect has occurred to me quite frequently in those areas of Wiltshire and Hampshire, including the New Forest, in which I have collected, although Fowler (1891) considered it rare and records that he had only ever seen one aliveâ&#x20AC;&#x201D;that was in the New Forest and he failed

IMPORTANT ADDITIONS TO THE SUFFOLK COLEOPTERA

to capture it. Great care is in fact needed when collecting members of this genus since their highly developed hind femora enable them to hop like fleas. Joy (1932) considers it a very locally distributed insect, whilst BĂźck (1954) in the most recent British work reviewing this genus merely states that it is widely distributed. Buck (ibid.) states that the adults are found 'In Polyporus, occasionally on Hawthorn blossom'. I have found the insect on numerous occasions in several different localities in Southern England, and in almost every case it has been under bark, chiefly that of Beech, Fagus. I have a single specimen in my collection taken by evening sweeping of grass, etc. in a ride at Grovely Wood, Wilts, l l t h August, 1971. The State of decay of the wood appears unimportant provided there is suitable fungoid growth for the development of the larvae. Fowler (ibid., p.38) records the beetle as being found 'Under bark, in fungoid growth, and in rotting wood of decaying beeches, etc.; it has also been found on the flowers of the white-thorn'. This would seem to be a much more accurate Statement concerning the microhabitats of undulata. Buck's total omission of any reference to the subcortical habits of this species is quite extraordinary. Our two other species of this genus, micans Panzer and minor Walker seem to be much more specifically attached to macrofungi than undulata and, if these are found under bark, it is probably only when they have taken up temporary residence there after the decay and disappearance from the trunk of a large fungus such as a Polyporus. Tenebrionidae Alphitobius diaperinus Panzer This cosmopolitan species was found abundantly in a deep litter poultry house at Tattingstone, near Ipswich (TM 1637) on 9th January, 1971. A. diaperinus was originally only found in this country in association with stored products, e.g. grain, flour, ground nuts, etc., but in recent years it has successfully established itself as a frequent inhabitant of broiler houses (Shaw (1961), Edwards (1962), etc.), where it probably chiefly feeds upon the droppings. Buck (1956) records it from birds' nests (Kite and Hammerkop) in the Sudan and Brendell (1975) reports that it has been found in lava caves in Kenya feeding on moulds, bat droppings, etc. Like its common relative Tenebrio molitor Linnaeus which often turns up in clean modern houses, usually having bred in sparrows' and starlings'nests in the roof or chimneys, A. diaperinus has been able to find alternative niches to occupy as a result of Man's activities. The other British species of this genus, laevigatus Fabricius has not so far occupied the poultry house niche.

I am not aware of any published records of the occurrence of A. diaperinus in Suffolk although it may well have been reported in some of the journals of economic entomology. Chrysomelidae Orsodacne cerasi Linnaeus On 9th July, 1972, two examples of this generally rather rare species were found in coitu on an umbel of Heracleum sphondylium L. on the eastern edge of Bentley Long Wood near Ipswich ( T M 1039). At the time, I assumed that the insect was one of those whose population was normally maintained at a fairly low density with the result that it was rarely encountered in numbers. On 28th May, 1975, I was forced to revise this opinion when I visited Groton Wood near Iiadleigh ( T L 9743) to continue survey work on the Coleoptera there. In this locality, recently acquired as a nature reserve by the Suffolk Trust for Nature Conservation, I was pleasantly surprised to discover the Orsodacne in vast numbers resting on the herbage and at flowers of Maple, Acer campestre L. and Hawthorn, Crataegus sp. Although found in several parts of the wood, it was in greatest abundance on its western edge. The beetle was present in all its colour varieties including a single example which would appear referable to the scarce black variety, glabrata Fabricius. On the same date I drove to nearby Wolves Wood (TM 0544) to see if the insect was present there, but I failed to encounter it. On 30th May, 1975, I spent the morning at Cutler's Wood, Freston some five km east of Bentley Long Wood. Although the locality would seem to provide suitable developmental sites for the Orsodacne, no examples were found. The same afternoon, I visited Bentley Long Wood again and was pleased to observe the beetle in considerable numbers on the eastern edge, up to ten in the sweep net from Maple blossom at one time, although not in such abundance as at Groton. In recent years I have visited the Bentley locality at approximately the same time of year (3Ist May, 1972; 27th May, 1973) and have swept the same hedge, but have not found the beetle. My early July examples had no doubt been late in emerging, the end of May through to June probably being the peak emergence period. T h e fact that Morley and his contemporaries did not find this particular species is perhaps indicative of its rarity and extreme localisation since they seem to have spent much of their collecting time, particularly in May and June, beating and sweepingâ&#x20AC;&#x201D;methods which should have yielded this species if it had been present in those areas of the county in which they worked. It would seem unlikely that the beetle is a recent colonist of the two localities discussed here. Its appearance in numbers may, however, be sporadic. The woods of Bentley and Belstead were,

in fact, among Morley's most favoured and intensively worked collecting areas. Unfortunately, in Iiis writings and on his data labels, Morley does not usually refer to individual woods by their specific names, so that I cannot say whether he actually collected at Bentley Long Wood. I am not aware that he ever visited Groton Wood. Crepidodera impresso. (Fabricius) Two specimens of this infrequently recorded insect were swept from saltmarsh V e g e t a t i o n , chiefly Halimione portulacoides (L.) Aell. and various grasses, at Barthorp's Creek, Hollesley, near Woodbridge on 23rd August, 1971 ( T M 3744). There was a sparse growth of Sea Lavender Statice limonium L. nearby. Originally discovered in this country at Hayling Island in 1909, Joy (loc.cit.) recorded C. impressa from only Hampshire, Dorset and Devon. He apparently overlooked Tomlin's (1924) record for Glamorgan. The only other published record of which I am aware is that of Hammond (1959) who found the beetle on Skipper's Island, Essex and who also notes that E. C. Bedwell took it at Gravesend.* Closely allied to the common C. transversa Marsh, impressa may chiefly be distinguished from it by its darker yellowish-red colouration, as opposed to reddish-yellow in the former, the clearly deeper transverse furrow at the base of the thorax, and the finer puneturation of the elytral Striae. Although transversa may be found in almost any habitat where nettles and thistles flourish, impressa seems to be exclusively coastal appearing to be specifically attached to S. limonium. Mr. A. A. Allen (in litt.) suggests that C. impressa is probably far more widespread round our coasts than the few published records indicate. Once again, it seems surprising that Morley, who worked the Suffolk saltmarshes fairly frequently, quite often with Coleopterist friends such as K. G. Blair, did not turn up this insect, particularly when we know he searched for Apion limotiii Kirby at roots of S. limonium.

Acknowledgements I thank Mr. A. A. Allen for much helpful correspondence, for determining the specimen of H. nigricornis, and for confirming my determination of C. impressa. I thank Mr. P. M. Hammond of the British Museum (Natural History) for checking the *Since writing the above, M r . D. Appleton has sent me a copy of his pnvately published Insects of Curbridge (1975) in which this insect is recorded as abundant in three separate sites beside the River Hamble near Southampton, Hants.

Further Important Additions to the Suffolk List of Coleoptera.

Further Important Additions to the Suffolk List of Coleoptera.