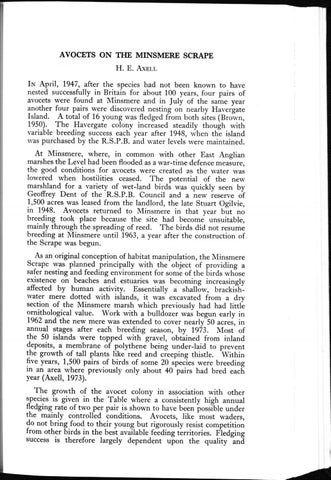 IN April, 1947, after the species had not been known to have nested successfully in Britain for about 100 years, four pairs of avocets were found at Minsmere and in July of the same year another four pairs were discovered nesting on nearby Havergate Island. A total of 16 young was fledged from both sites (Brown, 1950). The Havergate colony increased steadily though with variable breeding success each year after 1948, when the island was purchased by the R.S.P.B, and water levels were maintained. At Minsmere, where, in common with other East Anglian marshes the Level had been flooded as a war-time defence measure, the good conditions for avocets were created as the water was lowered when hostilities ceased. The potential of the new marshland for a variety of wet-land birds was quickly seen by Geoffrey Dent of the R.S.P.B. Council and a new reserve of 1,500 acres was leased from the landlord, the late Stuart Ogilvie, in 1948. Avocets returned to Minsmere in that year but no breeding took place because the site had become unsuitable, mainly through the spreading of reed. The birds did not resume breeding at Minsmere until 1963, a year after the construction of the Scrape was begun. As an original conception of habitat manipulation, the Minsmere Scrape was planned principally with the object of providing a safer nesting and feeding environment for some of the birds whose existence on beaches and estuaries was becoming increasingly affected by human activity. Essentially a shallow, brackishwater mere dotted with islands, it was excavated from a dry section of the Minsmere marsh which previously had had little ornithological value. Work with a bulldozer was begun early in 1962 and the new mere was extended to cover nearly 50 acres, in annual stages after each breeding season, by 1973. Most of the 50 islands were topped with gravel, obtained from inland deposits, a membrane of polythene being under-laid to prevent the growth of tall plants like reed and creeping thistle. Within five years, 1,500 pairs of birds of some 20 species were breeding in an area where previously only about 40 pairs had bred each year (Axell, 1973). The growth of the avocet colony in association with other species is given in the Table where a consistently high annual fledging rate of two per pair is shown to have been possible under the mainly controlled conditions. Avocets, like most waders, do not bring food to their young but rigorously resist competition from other birds in the best available feeding territories. Fledging success is therefore largely dependent upon the quality and

quantity of the water. On the Scrape, salinity is controlled at about 2 - 5 % . Evaporation, which could havc a dramatic effect over a wide area of shallow water (0-0-1 -5 feet deep), is replaced only by fresh water from a 100 acre reservoir maintained for the purpose in an adjacent, embanked area of the marsh. T h e low salinity has been shown to produce the best conditions, in our local climate, for the development of a succession of invertebrate food animals during the season and this is made available to adult and young avocets, as well as to other wading species, by the maintenance of areas of very shallow water. Samples taken at intervals of the aquatic flora and fauna showed that, as expected in a newly established brackish area, an unstable ecosystem was producing at first only a small variety of invertebrates. At different stages of the breeding season, however, these were in ample supply. Very small copepod crustaceans are common in the mats of algae while Lumbricillus, an oligochaete worm more important as a food for waders, was often abundant in the surface mud. T h e opossum shrimp Neomysis integer was at first in copious supply as a food for gulls and terns as well as waders but now a larger shrimp Palaemonetes varians is more widely available. Gammarus shrimps and chironomid midge larvae are present in the brackish water but are not found commonly. Gammarus is, however, freely available in the freshwater inlets and the freshwater pools constructed around the fringe of the Scrape and these areas also provide as food many water boatmen and other insects; the water is often thickened by Daphnia magna in summer. From April to October the existence of rieh feeding conditions is demonstrated by the numbers and variety of waders, having different bill lengths, which are present. Fewer of course are seen in early spring but with increasing temperatures coinciding with migration some 25 wader species are generally to be found feeding on the Scrape from July to September; from one hide recently as many as 29 wader species could be seen daily in late July and early August. Most importantly, the ready availability of food is shown by the swallowing rate of the breeding avocets. Adults average 49 items a minute in shallow water while pulli, half to three-quarters grown, manage 60 items a minute. Fiedging periods of the young, controlled by food intake modified by the occurrence of bad weather requiring more time to be spent being brooded, are 5-5 | weeks in May and June and as short as 44 weeks in the warmer, richer conditions of July and August. An escaped South American flamingo, which has occurred here in most years, demonstrated the abundance of food by sustaining itself for three weeks in the water of the Scrape in 1969. Except that brief visits on to the Scrape are occasionally made by the Wardens for gull control and other management purposes,

the breeding birds are also favoured by the reduction of human interference; mammalian predation is kept under strict control and eggs and young cannot be covered by suddenly rising water nor by blovvn sand. Shelter and escape-cover for chicks are provided by the new salt-marsh plants, mainly marsh samphire, sea aster and sea spurry, the amount and distribution of which are controlled by "gardening". Avocets, of all the species breeding on the Scrape, seem the most able to defend themselves, their eggs and young against predators. On one occasion, however, a fox destroyed six avocets' clutches and four little terns' clutches on an island; the fox was shot two nights later. Although the Wardens take extreme measures against rats, the Scrape being surrounded with traps and warfarin baiting points, these rodents have occasionally taken avocets' eggs, as well of those of the more numerous gulls and terns. A moorhen, a coot and an oystercatcher have each twice been known to eat avocets' eggs in the nest; it is not known that black-headed gulls have done so and, since that species began to nest on the Scrape in 1964 they have only about once in each year been seen to destroy an avocet chick. Some disappearances, of unknown cause, of avocet chicks may probably be attributed to these gulls as well, no doubt, to the few stoats and weasels which live in the surrounding banks. The breeding area is under almost continuous Observation by day and guarded throughout every night while the avocets have eggs. Feeding territories are almost always successfully defended against competitors or intruders. Birds as large as mute swans, Canada geese and as many as five spoonbills at a time have been made to withdraw. Avocets are also particularly aggressive towards pheasants which are often to be seen Walking through the shallow water of the Scrape. Marsh harriers, nesting within half a mile, do not try to penetrate the massed, screaming defence put up by the waders, gulls and terns of the Scrape nor do the local coypus and otter venture out on the mud and shallow water in the breeding season. Avocet chicks exhibit aggression when they are about ten days old and easily drive off birds larger than themselves like ringed plovers, dunlins and little stints. Breeding begins early but has been much inhibited by the cold weather which has been a feature of some recent springs. The very first pair to breed on the Scrape, in 1963, began their clutch as late as May 3Ist but thereafter dates of first eggs have been between April 8th and 18th; once, in the cold April of 1973, not until 26th. Late clutches, mostly replacements, have been laid until middle or late June and these have been most successful; predation, by mammals at least, appears to be much diminished after early June.

One or two birds have spent two winters at Minsmere but generally most of the Scrape has been drained in late autumn to facilitate maintenance and further construction work with heavy machines. Avocets are now the first of the summer visitors to arrive, dates being on April 8th in 1964 then successively, in March, on 19th, 17th, 4th, 13th, 19th, 6th, 12th, 5th, 5th, 5th to 1974 and as early as February 16th in 1975 during a long, unseasonably warm period. T h e build-up of the colony has occurred rapidly and most have arrived by mid-April though numbers present at this period have fluctuated with the occurrence of very cold spells. Stragglers from elsewhere have arrived in most years to breed late and several non-breeders, perhaps mainly first-summer birds, have been present in May and June. Dispersal begins in late July, apparently in units of a female parent with her fledged brood of one to four, and continues until midSeptember. Rare stragglers occur in some years in November and December. With the object of obtaining evidence of survival, place and age of breeding, winter quarters and longevity, 125 pulli were ringed in three seasons, 1970-2. All of these young fledged. Information obtained included, as expected, two being killed in Spain, another was found dead in Holland outside the breeding season. T w o of the birds with colour rings were seen among a group wintering on the River Tamar, in Devon, and another colour ringed bird has been seen nesting at Havergate and another nearby. This small return did not justify the disturbance to the avocet families and other species breeding on the Scrape caused by catching up the young and the investigation was concluded. References Axell, H. E. (1973). Establishment and management of an artificial brackish lake, with nesting islands ( ' T h e Scrape'). Minsmere Part I I in Manual of Wetland Management. Slimbridge. International Waterfowl Research Bureau. Brown, P. E. (1950). Avocets in England. London. Royal Society for the Protection of Birds.

Avocets on the Minsmere Scrape

Avocets on the Minsmere Scrape