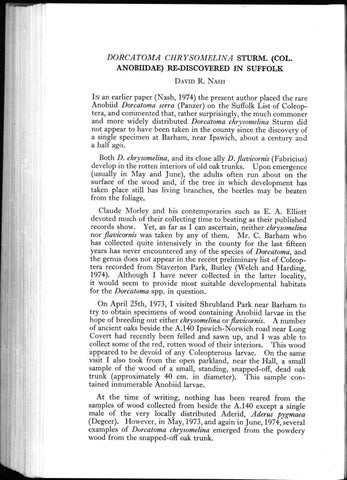 IN an earlier paper (Nash, 1974) the present author placed the rare Anobiid Dorcatoma serra (Panzer) on the Suffolk List of Coleoptera, and commented that, rather surprisingly, the much commoner and more widely distributed Dorcatoma chrysomelina Sturm did not appear to have been taken in the county since the discovery of a single specimen at Barham, near Ipswich, about a Century and a half ago. Both D. chrysomelina, and its close ally D. flavicornis (Fabricius) develop in the rotten interiors of old oak trunks. Upon emergence (usually in May and June), the adults often run about on the surface of the wood and, if the tree in which development has taken place still has living branches, the beetles may be beaten from the foliage. Claude Morley and his contemporaries such as E. A. Elliott devoted much of their collecting time to beating as their published records show. Yet, as far as I can ascertain, neither chrysomelina nor flavicornis was taken by any of them. Mr. C. Barham who has collected quite intensively in the county for the last fifteen years has never encountered any of the species of Dorcatoma, and the genus does not appear in the recent preliminary list of Coleoptera recorded from Staverton Park, Butley (Welch and Harding, 1974). Although I have never collected in the latter locality, it would seem to provide most suitable developmental habitats for the Dorcatoma spp. in question. On April 25th, 1973, I visited Shrubland Park near Barham to try to obtain specimens of wood containing Anobiid larvae in the hope of breeding out either chrysomelina or flavicornis. A number of ancient oaks beside the A.140 Ipswich-Norwich road near Long Covert had recently been felled and sawn up, and I was able to collect some of the red, rotten wood of their interiors. This wood appeared to be devoid of any Coleopterous larvae. On the same visit I also took from the open parkland, near the Hall, a small sample of the wood of a small, standing, snapped-off, dead oak trunk (approximately 40 cm. in diameter). This sample contained innumerable Anobiid larvae. At the time of writing, nothing has been reared from the samples of wood collected from beside the A.140 except a single male of the very locally distributed Aderid, Aderus pygmaea (Degeer). However, in May, 1973, and again in June, 1974, several examples of Dorcatoma chrysomelina emerged from the powdery wood from the snapped-off oak trunk.

It is probably purely coincidental that this confirmation of Kirby's ancient record of chrysomelina originates from almost the same parish as that of the original record. (Half of Shrubland Park lies in the parish of Coddenham and half in that of Barham— the tree in which the beetle was breeding was just inside the Coddenham parish boundary.) It does, nonetheless, seem rather curious that such a relatively conspicuous insect does not appear to have been noticed in other apparently suitable habitats in the county. Acknowledgements I should like to thank Mr. A. A. Allen for checking the specific identity of specimens of the Dorcatoma for me, and Lord de Saumarez for most kindly allowing me to study on his estate at Barham. References NTaoh, D . R. (1974). F o u r species of Coleoptera probably n e w to t h e Suffolk C o u n t y List. Suffolk Natural History 16, 211-14. Welch, R. C. and H a r d i n g , P. T . (1974). A preliminary list of t h e fauna of Staverton Park, Suffolk. Part 2 — I n s e c t a : Coleoptera. Suffolk Natural History 16, 287-304.