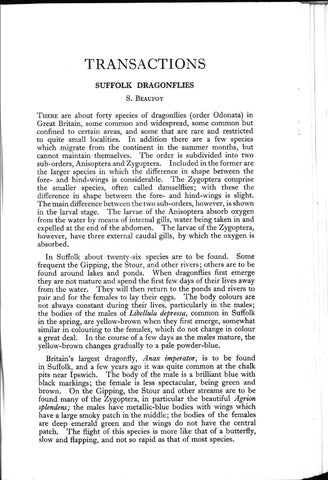 are about forty species of dragonflies (order Odonata) in Great Britain, some common and widespread, some common but confined to certain areas, and some that are rare and restricted to quite small localities. In addition there are a few species which migrate from the continent in the summer months, but cannot maintain themselves. The order is subdivided into two sub-orders, Anisoptera and Zygoptera. Included in the former are the larger species in which the difference in shape between the fore- and hind-wings is considerable. The Zygoptera comprise the smaller species, often called damselflies; with these the difference in shape between the fore- and hind-wings is slight. The main difference between the two sub-orders, however, is shown in the larval stage. The larvae of the Anisoptera absorb oxygen from the water by means of internal gills, water being taken in and expelled at the end of the abdomen. The larvae of the Zygoptera, however, have three external caudal gills, by which the oxygen is absorbed. THERE

In Suffolk about twenty-six species are to be found. Some frequent the Gipping, the Stour, and other rivers; others are to be found around lakes and ponds. When dragonflies first emerge they are not mature and spend the first few days of their lives away from the water. They will then return to the ponds and rivers to pair and for the females to lay their eggs. The body colours are not always constant during their lives, particularly in the males; the bodies of the males of Libellula depressa, common in Suffolk in the spring, are yellow-brown when they first emerge, somewhat similar in colouring to the females, which do not change in colour a great deal. In the course of a few days as the males mature, the yellow-brown changes gradually to a pale powder-blue. Britain's largest dragonfly, Anax Imperator, is to be found in Suffolk, and a few years ago it was quite common at the chalk pits near Ipswich. The body of the male is a brilliant blue with black markings; the female is less spectacular, being green and brown. On the Gipping, the Stour and other streams are to be found many of the Zygoptera, in particular the beautiful Agrion splendens; the males have metallic-blue bodies with wings which have a large smoky patch in the middle; the bodies of the females are deep emerald green and the wings do not have the central patch. The flight of this species is more like that of a butterfly, slow and flapping, and not so rapid as that of most species.

There are many species of the small Zygoptera and close examination is necessary in order to identify some. In addition to similarity between some species, particularly in the females, there is sometimes considerable Variation between individuals of the same species. T h e method of pairing in dragonflies is unique in the animal world. T h e genitalia of both male and female are situated in the end of the abdomen. T h e males, however, possess accessory genitalia beneath the front segments of the abdomen; these accessory genitalia are charged with sperm by the male bendmg his abdomen round so that his true genitalia make contact with the accessory genitalia and sperm is then transferred from the former to the latter. Düring pairing the male will grasp the female behmd the head with his tail filaments, and she then bends her body underneath the male, so that her genitalia come into contact with the accessory genitalia of the male. When egg-laying some species remain "in tandem" with the male still holdmg the female behind the head, but with others the two sexes separate, but often the male will keep Aying close to the female while she is laying her eggs. T h e following list of Suffolk dragonflies is based partly on records of the author and also on the records in Miss Longfield's "Dragonflies of the British Isles". S u b - o r d e r ZYGOPTERA