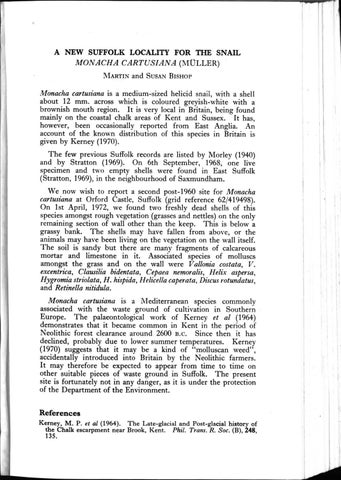 Monacha cartusiana is a medium-sized helicid snail, with a shell about 12 mm. across which is coloured greyish-white with a brownish mouth region. It is very local in Britain, being found mainly on the coastal chalk areas of Kent and Sussex. It has, however, been occasionally reported from East Anglia. An account of the known distribution of this species in Britain is given by Kerney (1970). The few previous Suffolk records are listed by Morley (1940) and by Stratton (1969). On 6th September, 1968, one live specimen and two empty shells were found in East Suffolk (Stratton, 1969), in the neighbourhood of Saxmundham. We novv wish to report a second post-1960 site for Monacha cartusiana at Orford Castle, Suffolk (grid reference 62/419498). On Ist April, 1972, we found two freshly dead shells of this species amongst rough Vegetation (grasses and nettles) on the only remaining section of wall other than the keep. This is below a grassy bank. The shells may have fallen from above, or the animals may have been living on the Vegetation on the wall itself. The soil is sandy but there are many fragments of calcareous mortar and limestone in it. Associated species of molluscs amongst the grass and on the wall were Vallonia costata, V. excentrica, Clausilia bidentata, Cepaea nemoralis, Helix aspersa, Hygromia striolata, H. hispida, HeliceĂźa caperata, Discus rotundatus, and Retinella nitidula. Monacha cartusiana is a Mediterranean species common ly associated with the waste ground of cultivation in Southern Europe. The palaeontological work of Kerney et al (1964) demonstrates that it became common in Kent in the period of Neolithic forest clearance around 2600 B.c. Since then it has declined, probably due to lower summer temperatures. Kerney (1970) suggests that it may be a kind of "molluscan weed", accidentally introduced into Britain by the Neolithic farmers. It may therefore be expected to appear from time to time on other suitable pieces of waste ground in Suffolk. The present site is fortunately not in any danger, as it is under the protection of the Department of the Environment. References Kerney, M . P. et al (1964). T h e Late-glacial and Post-glacial history of the Chalk escarpment near Brook, Kent. Phil. Trans. R. Soc. (B), 248,

A New Suffolk locality for the Snail Monacha cartusiana (Müller)

A New Suffolk locality for the Snail Monacha cartusiana (Müller)