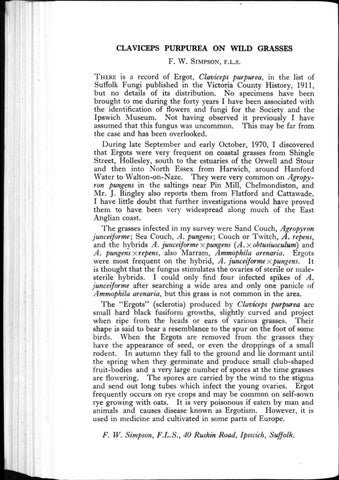 THERE is a record of Ergot, Claviceps purpurea, in the list of Suffolk Fungi published in the Victoria County History, 1911, but no details of its distribution. No specimens have been brought to me during the forty years I have been associated with the identification of flowers and fungi for the Society and the Ipswich Museum. Not having observed it previously I have assumed that this fungus was uncommon. This may be far from the case and has been overlooked. During late September and early October, 1970, I discovered that Ergots were very frequent on coastal grasses from Shingle Street, Hollesley, south to the estuaries of the Orwell and Stour and then into North Essex from Harwich, around Hamford Water to Walton-on-Naze. They were very common on Agropyron pungens in the saltings near Pin Mill, Chelmondiston, and M r . J. Bingley also reports them from Fiatford and Cattawade. I have little doubt that further investigations would have proved them to have been very widespread along much of the East Anglian coast. T h e grasses infected in my survey were Sand Couch, Agropyron junceiforme; Sea Couch, A. pungens-, Couch or Twitch, A. repens, and the hybrids A. junceiforme xpungens (A.xobtusiusculum) and A. pungens x repens, also Marram, Ammophila arenaria. Ergots were most frequent on the hybrid, A. junceiforme xpungens. It is thought that the fungus stimulates the ovaries of sterile or malesterile hybrids. I could only find four infected spikes of A. junceiforme after searching a wide area and only one panicle of Ammophila arenaria, but this grass is not common in the area. T h e "Ergots" (sclerotia) produced by Claviceps purpurea are small hard black fusiform growths, slightly curved and project when ripe from the heads or ears of various grasses. Their shape is said to bear a resemblance to the spur on the foot of some birds. When the Ergots are removed from the grasses they have the appearance of seed, or even the droppings of a small rodent. In autumn they fall to the ground and lie dormant until the spring when they germinate and produce small club-shaped fruit-bodies and a very large number of spores at the time grasses are flowering. T h e spores are carried by the wind to the Stigma and send out long tubes which infect the young ovaries. Ergot frequently occurs on rye crops and may be common on self-sown rye growing with oats. It is very poisonous if eaten by man and animals and causes disease known as Ergotism. However, it is used in medicine and cultivated in some parts of Europe. F. W. Simpson, F.L.S.,