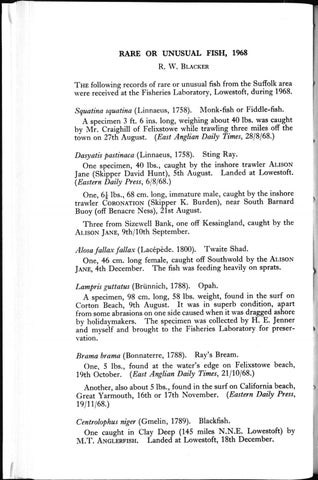 Alosa fallax fallax (Lacepede. 1800). Twaite Shad. One, 4 6 cm. long female, caught off Southwold by the ALISON JANE, 4th December. The fish was feeding heavily on sprats. Lampris guttatus (Brünnich, 1788). Opah. A specimen, 98 cm. long, 58 lbs. weight, found in the surf on Corton Beach, 9th August. It was in superb condition, apart from some abrasions on one side caused when it was dragged ashore by holidaymakers. The specimen was collected by H . E. Jenner and myself and brought to the Fisheries Laboratory for preservation. Brama brama (Bonnaterre, 1788). Ray's Bream. One, 5 lbs., found at the water's edge on Felixstowe beach, 19th October. (East Anglian Daily Times, 21/10/68.) Another, also about 5 lbs., found in the surf on California beach, Great Yarmouth, 16th or 17th November. (Eastern Daily Press, 19/11/68.) Centrolophus niger (Gmelin, 1789).

The interesting feature of these records is the occurrence of the Opah, Sting rays, and Monk-fish off the Suffolk coast in August and September. The latter two are well known from the western English Channel but are rare in the southern North Sea. The Opah is a southern oceanic fish which is occasionally carried into northerly waters. Most British records are from west of Ireland and northern Scotland, Orkney, and Shetland and it is very rare in the southern North Sea. All these fish probably entered the North Sea through the Straits of Dover, in contrast to the Ray's Bream caught later in the year. In 'Ray's Bream years', like 1967 which produced the largest influx yet recorded for the North Sea, the captures of Ray's Bream follow a seasonal pattern: the first records are usually from north and north-west Scotland in August, followedby records from eastern Scotland in September and from there to East Anglia in October and November. Curiously enough, in 1967, although there were thirteen records from the Norfolk coast, there seem to have been none from Suffolk. The Blackfish, like the Ray's Bream, is an oceanic fish usually found on the Atlantic Slope fishing grounds and very rare in the southern North Sea. R. IV. Blacker, Fisheries Laboratory,