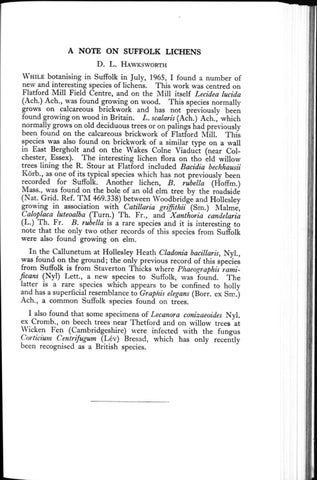 A NOTE ON SUFFOLK LICHENS D.

W HILE botanising in Suffolk in July, 1965, I found a number of new and interesting species of lichens. This work was centred on Fiatford Mill Field Centre, and on the Mill itself Lecidea lucida (Ach.) Ach., was found growing on wood. This species normally grows on calcareous brickwork and has not previously been found growing on wood in Britain. L. scalaris (Ach.) Ach., which normally grows on old deciduous trees or on palings had previously been found on the calcareous brickwork of Fiatford Mill. This species was also found on brickwork of a similar type on a wall in Fast Bergholt and on the Wakes Colne Viaduct (near Colchester, Essex). The interesting liehen flora on tho eld willow trees lining the R. Stour at Fiatford included Bacidia beckhausii Kรถrb., as one of its typical species which has not previously been recorded for Suffolk. Another liehen, B. rubella (Hoffm.) Mass., was found on the bole of an old elm tree by the roadside (Nat. Grid. Ref. T M 469.338) between Woodbridge and Hollesley growing in association with Catillaria griffithii (Sm.) Malme, Caloplaca luteoalba (Turn.) Th. Fr., and Xanthoria candelaria (L.) Th. Fr. B. rubella is a rare species and it is interesting to note that the only two other records of this species from Suffolk were also found growing on elm. In the Callunetum at Hollesley Heath Cladonia bacillaris, Nyl., was found on the ground; the only previous record of this species from Suffolk is from Staverton Thicks where Phaeographis ramificans (Nyl) Lett., a new species to Suffolk, was found. The latter is a rare species which appears to be confined to holly and has a superficial resemblance to Graphis elegans (Borr, ex Sm.) Ach., a common Suffolk species found on trees. I also found that some speeimens of Lecanora conisaeoides Nyl. ex Cromb., on beech trees near Thetford and on willow trees at VVicken Fen (Cambridgeshire) were infected with the fungus Corticium Centrifugum (Lev) Bresad, which has only recently been recognised as a British species.

A Note on Suffolk Lichens

A Note on Suffolk Lichens