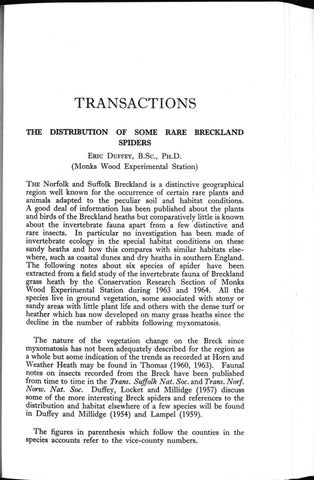 (Monks Wood Experimental Station) THE Norfolk and Suffolk Breckland is a distinctive geographical region well known for the occurrence of certain rare plants and animals adapted to the peculiar soil and habitat conditions. A good deal of Information has been published about the plants and birds of the Breckland heaths but comparatively little is known about the invertebrate fauna apart from a few distinctive and rare insects. In particular no investigation has been made of invertebrate ecology in the special habitat conditions on these sandy heaths and how this compares with similar habitats elsewhere, such as coastal dunes and dry heaths in southern England. The following notes about six species of Spider have been extracted from a field study of the invertebrate fauna of Breckland grass heath by the Conservation Research Section of Monks Wood Experimental Station during 1963 and 1964. All the species live in ground Vegetation, some associated with stony or sandy areas with little plant life and others with the dense turf or heather which has now developed on many grass heaths since the decline in the number of rabbits following myxomatosis. The nature of the Vegetation change on the Breck since myxomatosis has not been adequately described for the region as a whole but some indication of the trends as recorded at Horn and Weather Heath may be found in Thomas (1960, 1963). Faunal notes on insects recorded from the Breck have been published from time to time in the Trans. Suffolk Nat. Soc. and Trans. Norf. Norw. Nat. Soc. Duffey, Locket and Millidge (1957) discuss some of the more interesting Breck spiders and references to the distribution and habitat elsewhere of a few species will be found in Duffey and Millidge (1954) and Lampel (1959). The figures in parenthesis which follow the counties in the species accounts refer to the vice-county numbers.

68 Transactions of the Suffolk Naturalists', Vol.

A small crab spider 2-3 mm. in length, a dull mottled brown when seen in the field, making it very inconspicuous on the breck sand. It has occurred on nearly all the sandy heaths in the Breck where several collections have been made, usually on areas where there is a good deal of bare sand and short scattered Vegetation. Where the grass is long and forms a continuous turf cover, it is usually much less common, but it has been taken on the bare sand around rabbit holes on heaths of this type. In Dorset, Hampshire, and Surrey it occurs in some numbers on heather heaths on coarse sand where open ground forms 50-80% of the cover. It has also been taken on coastal dunes on the Norfolk coast where mobile sand formed about 60% of the cover between marram grass tussocks. Adult males have been taken in March, April, May, August, September, and October; adult females in the period May to September inclusive. The summer gap in the male season is difficult to understand because June and July are active collecting months and one would not expect to miss adults if they were about. If adult males are not normally found during these two months, maturity may be reached in autumn and after a quiescent period during the winter, the spiders appear again in the spring. However, most of the records were obtained by pitfall trapping, which is a measure of activity but not of the fĂźll duration of maturity. DISTRIBUTION. W. Suffolk (26) : Lakenheath Warren, Thetford Heath, Foxhole Heath, Icklingham (Dead Man's Grave), Mildenhall, Freckenham. Norfolk (28) : Scolt Head Island, Weeting Heath. Dorset (9) : Studland Heath. Hampshire (11) : Beaulieu Road. Surrey (17) : Thursley Common, Woking, Chobham, Oxshott. Pembrokeshire (45) : Skomer Island. The distribution map (MAP 1) suggests that this species is mainly confined to dry light soils in south-eastern England, where the climate is nearest to the Continental type.

A strikingly handsome spider up to 6 mm. in length and easily identified by its black and cream abdominal colour pattern. It is one of the most characteristic spiders of the stony breck heaths where the Vegetation is thin and scattered. It is absent where there is a continuous grass or heather cover or where the ground surface is bare sand, smoothed by the wind, so that there are no permanent irregularities of sufficient size for web construction. Large webs may cover an area of J sq. ft. but usually they are appreciably smaller. Typical sites for webs on the Breck are : (a) the angle between a large flint and the ground surface ; (b)

a rabbit " scrape " in. lichen-covered ground or in a place where the sand is firm and largely free of Vegetation ; (c) around an isolated grass tussock or between heather twigs and the ground. Norgaard (1950) studied the biology of this species in Denmark where it is found on dry stony heaths with low scattered Vegetation. In laboratory experiments the spider was shown to prefer a temperature ränge between 35°C and 45°C, high values which are typical of such habitats. The web consists of a sheet of large-sized mesh from which a number of vertical strands extend to the ground. The lower part of each vertical Strand is coated with viscid droplets which in Denmark was very effective in catching ants running on the bare sand. Beetles and small grasshoppers were also taken. In the Breck the main prey appeared to be ground beetles and weevils. In Dorset, Surrey, and Hampshire this spider is frequently found on heather heaths where there is a good deal of bare ground either as a result of recent burning or on stony patches where the soil is very thin. Dr. P. Merrett (in litt.) comments : " It appears to be most abundant under the prostrate stems of Ulex minor but also occurs under stones and occasionally under young Calluna plants. It seems to survive until quite a late stage in the growth of heather after burning, but disappears by the time the bare ground is reduced to 10-20%. It never appears to be present in small bare patches within mature stands of heather ; it apparently needs a fairly large expanse of suitable terrain ". It has also been found on the bare peat among small scattered heather plants of a burnt area of Buxton Heath, Norfolk. A more surprising habitat, but structurally similar to the stony breck, is the Consolidated shingle just above H.W.M. on the landward side of Scolt Head Island, Norfolk, where webs were spun around stones and oyster shells, the latter providing a sheltered retreat for the waiting spider. A single male has also been trapped on the fore-dunes at Studland Heath, Dorset (P. Merrett). Adult males have been taken in May to August and adult females in April to July inclusive. The distribution pattern (MAP 2) is very similar to that of Oxyptila scabricula, on dry light soils in the south-east of England. DISTRIBUTION. Norfolk (27 and 28) : Buxton Heath, Weeting Heath, Scolt Head Island. W. Suffolk (26) : Foxhole Heath, Thetford Heath, Wangford Warren, Lakenheath Warren. Hampshire (11) : Beaulieu Road Heath, " New Forest ". Dorset (9) : Slepe Heath (Wareham), Wareham Heath, Studland Heath, Hartland Heath, Morden Heath, Stokeford Heath. Surrey (17) : Chobham, Oxshott, Frensham, and Thursley Commons.

An ant-like spider, 4-5 mm. in length, dark-grey with a wellmarked iridescence in sunlight. It runs very rapidly and is perhaps more ant-like in its movements and behaviour than in appearance. Until 1955 only two female specimens were known from this country, both taken in the New Forest but from different localities (Locket and Millidge, 1953). In 1955 (Lampel, 1959) both sexes were taken in fair numbers running in the sun amongst ants on a bare earth mound on Upper Hollesley Common, Suffolk, a heather heath with birch and pine on acid gravels. In May, 1956 (Duffey, Locket and Millidge, 1957) several males and females were taken on Foxhole Heath, West Suffolk, on dry stony breck and in June, 1957 further specimens were taken in a sandy gully through a heather heath near Walberswick, East Suffolk. In 1963 and 1964 it occurred regularly in the Vegetation samples and pitfall traps on Foxhole Heath. The known distribution of this spider is similar to that of Oxyptila scabricula an 1 Lithyphantes albomaculatus and although mainly associated with dry heathland it does not appear to demand a high proportion of bare ground, occurring both in open areas and heaths covered with heather. It is absent from the thick turf of Weeting Heath, however, and has not been recorded in other areas, e.g., Thetford Heath where at least part of the habitat would appear to be suitable. On Studland Heath, Dorset, specimens have been taken in the fore-dunes with marram grass and on older dunes with heather. At Hartland, Dorset, specimens have been taken on open wet heath bordering dry ground. The period of maturity is short, adult males have been taken in May and June only and adult females in May to August inclusive. DISTRIBUTION. E. Suffolk (25) : Upper Hollesley Common, Walberswick. W. Suffolk (26) : Foxhole Heath. Dorset (9) : Studland Heath, Hartland Heath. Hampshire (11): " N e w Forest ", Beaulieu Road Heath, Denny Wood. Surrey (17) : Thursley Common, Frensham Heath.

A small, brownish spider about 2 mm. in length. The first specimen taken (Balmoral, Scotland 1905) was misidentified until 1952, when further specimens were collected on Frilford Heath, Berkshire (Duffey and Millidge, 1954). DĂźring the winter of 1961 and 1962 males and females were taken on Thetford Heath, W. Suffolk, in pitfall traps amongst scattered heather plants and in a pure stand of sandsedge (Corex arenaria). In 1963 further

74 Transactions of the Suffolk Naturalists', V

specimens were taken on Weeting Heath, Norfolk, in a thick Festuca rubra turf on sand. In November, 1962, both sexes were taken in dry grass on a chalk down near Leckford, Hampshire (G H Locket and A. F. Millidge, unpublished). Although the English records are all from Vegetation on light soils (the Scottish habitat ls not known), tall, dense turf and sandsedge would preserve a high humidity close to the ground where this species lives, so it cannot be said to show a distinct preference for dry habitats. Duffey and Millidge (1954) summarise the continental records and show that this species has been taken in a wide variety of habitats from leaf litter in dry pine wood to caves and a Sphagnum bog. In common with many other linyphiids, C. incilium is mature in the winter when most grassland areas in the Atlantic climate of this country are likely to be moist, irrespective of the substrata. Adult males have been taken in November, December, Tanuarv February, and March ; adult females in November, December' and January. DISTRIBUTION Norfolk (28) : Weeting Heath. W. Suffolk : ÂŁhfftfor,d Heath. Hampshire (11) : Leckford. Berkshire (II) : rrilford Heath. Aberdeenshire (92) : Balmoral.

76 Transactions of the Suffolk Naturalists', Vol. 13,

78 Transactions of the Suffolk Naturalists', Vol. 13 PROSOPOTHECA INCISA (O. P.-C.), Linyphiidae A rare spider in Britain, very few specimens (all females) having been taken. The Breckland specimen was taken in December, 1961 in a pitfall trap in patchy grass heath on sand (Thetford Heath). Habitat details are not known for the other British records, the distribution of which suggests that this species has no special association with dry grassland.

The localities listed for the six species discussed in this paper include all those known up to the time of writing. I am particularly grateful to the following who have given me details of published and unpublished records and notes on habitat : Dr. A. D. Biest, D. J. Clarke, G. H. Locket, and Dr. P. Merrett.

The Distribution of some rare Breckland Spiders

The Distribution of some rare Breckland Spiders