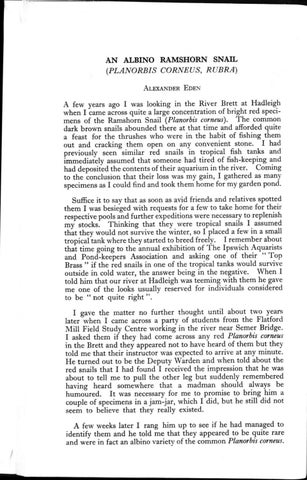 A few years ago I was looking in the River Brett at Hadleigh when I came across quite a large concentration of bright red specimens of the Ramshorn Snail (Planorbis corneus). The common dark brown snails abounded there at that time and afforded quite a feast for the thrushes who were in the habit of fishing them out and cracking them open on any convenient stone. I had previously seen similar red snails in tropical fish tanks and immediately assumed that someone had tired of fish-keeping and had deposited the contents of their aquarium in the river. Coming to the conclusion that their loss was my gain, I gathered as many specimens as I could find and took them home for my garden pond. Suffice it to say that as soon as avid friends and relatives spotted them I was besieged with requests for a few to take home for their respective pools and further expeditions were necessary to replenish my stocks. Thinking that they were tropical snails I assumed that they would not survive the winter, so I placed a few in a small tropical tank where they started to breed freely. I remember about that time going to the annual exhibition of The Ipswich Aquarists and Pond-keepers Association and asking one of their " Top Brass " if the red snails in one of the tropical tanks would survive outside in cold water, the answer being in the negative. When I told him that our river at Hadleigh was teeming with them he gave me one of the looks usually reserved for individuals considered to be " not quite right ". I gave the matter no further thought until about two years later when I came across a party of students from the Fiatford Mill Field Study Centre working in the river near Semer Bridge. I asked them if they had come across any red Planorbis corneus in the Brett and they appeared not to have heard of them but they told me that their instructor was expected to arrive at any minute. He turned out to be the Deputy Warden and when told about the red snails that I had found I received the impression that he was about to teil me to pull the other leg but suddenly remembered having heard somewhere that a madman should always be humoured. It was necessary for me to promise to bring him a couple of specimens in a jam-jar, which I did, but he still did not seem to believe that they really existed. A few weeks later I rang him up to see if he had managed to identify them and he told me that they appeared to be quite rare and were in fact an albino variety of the common Planorbis corneus.

My curiosity was then aroused and I wrote to the Natural History Museum at South Kensington who confirmed the Fiatford Mill diagnosis ; they also referred me to the Proceedings of the Malacological Society of London* for 1928, these containing a paper read by one of their members on this subject. The Ipswich Public Library were very helpful and managed to get me photostat copies of the relevant pages of the above Proceedings. From them I learned that these snails were named Planorbis corneus rubra and were in fact a mutation, the lack of pigment in the body allowing the red blood to show. The writer had also come across another albino of this snail which had no pigment in the shell although the body was the normal dark brown, the shell being white. I have now bred countless generations of these red snails, all of them being true albinos, the fact that those in the pond survived the terrible winter of 1962/63 will vouch for their hardiness, the pond being a complete block of ice. I shall be pleased to hear of any of these snails having been found by members. I have seen none in the River Brett for two or three years now, and even the common varieties appear to be decreasing although other freshwater creatures appear to be thriving.