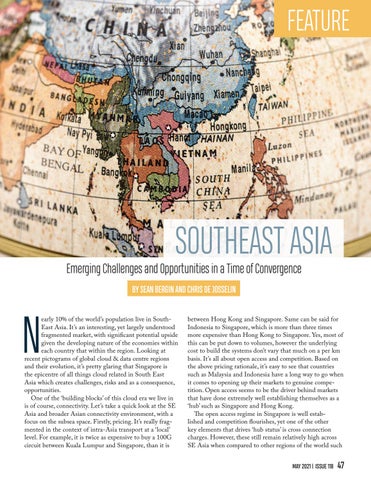 early 10% of the world’s population live in SouthEast Asia. It’s an interesting, yet largely understood fragmented market, with significant potential upside given the developing nature of the economies within each country that within the region. Looking at recent pictograms of global cloud & data centre regions and their evolution, it’s pretty glaring that Singapore is the epicentre of all things cloud related in South East Asia which creates challenges, risks and as a consequence, opportunities. One of the ‘building blocks’ of this cloud era we live in is of course, connectivity. Let’s take a quick look at the SE Asia and broader Asian connectivity environment, with a focus on the subsea space. Firstly, pricing. It’s really fragmented in the context of intra-Asia transport at a ‘local’ level. For example, it is twice as expensive to buy a 100G circuit between Kuala Lumpur and Singapore, than it is

between Hong Kong and Singapore. Same can be said for Indonesia to Singapore, which is more than three times more expensive than Hong Kong to Singapore. Yes, most of this can be put down to volumes, however the underlying cost to build the systems don’t vary that much on a per km basis. It’s all about open access and competition. Based on the above pricing rationale, it’s easy to see that countries such as Malaysia and Indonesia have a long way to go when it comes to opening up their markets to genuine competition. Open access seems to be the driver behind markets that have done extremely well establishing themselves as a ‘hub’ such as Singapore and Hong Kong. The open access regime in Singapore is well established and competition flourishes, yet one of the other key elements that drives ‘hub status’ is cross connection charges. However, these still remain relatively high across SE Asia when compared to other regions of the world such MAY 2021 | ISSUE 118