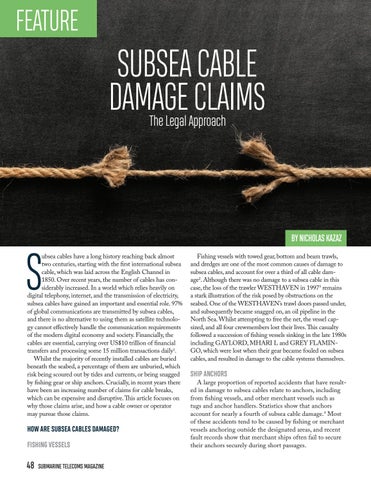 ubsea cables have a long history reaching back almost two centuries, starting with the first international subsea cable, which was laid across the English Channel in 1850. Over recent years, the number of cables has considerably increased. In a world which relies heavily on digital telephony, internet, and the transmission of electricity, subsea cables have gained an important and essential role. 97% of global communications are transmitted by subsea cables, and there is no alternative to using them as satellite technology cannot effectively handle the communication requirements of the modern digital economy and society. Financially, the cables are essential, carrying over US$10 trillion of financial transfers and processing some 15 million transactions daily1. Whilst the majority of recently installed cables are buried beneath the seabed, a percentage of them are unburied, which risk being scoured out by tides and currents, or being snagged by fishing gear or ship anchors. Crucially, in recent years there have been an increasing number of claims for cable breaks, which can be expensive and disruptive. This article focuses on why those claims arise, and how a cable owner or operator may pursue those claims.

BY NICHOLAS KAZAZ Fishing vessels with towed gear, bottom and beam trawls, and dredges are one of the most common causes of damage to subsea cables, and account for over a third of all cable damage2. Although there was no damage to a subsea cable in this case, the loss of the trawler WESTHAVEN in 19973 remains a stark illustration of the risk posed by obstructions on the seabed. One of the WESTHAVENâ&#x20AC;&#x2122;s trawl doors passed under, and subsequently became snagged on, an oil pipeline in the North Sea. Whilst attempting to free the net, the vessel capsized, and all four crewmembers lost their lives. This casualty followed a succession of fishing vessels sinking in the late 1980s including GAYLORD, MHARI L and GREY FLAMINGO, which were lost when their gear became fouled on subsea cables, and resulted in damage to the cable systems themselves.

A large proportion of reported accidents that have resulted in damage to subsea cables relate to anchors, including from fishing vessels, and other merchant vessels such as tugs and anchor handlers. Statistics show that anchors account for nearly a fourth of subsea cable damage.4 Most of these accidents tend to be caused by fishing or merchant vessels anchoring outside the designated areas, and recent fault records show that merchant ships often fail to secure their anchors securely during short passages.