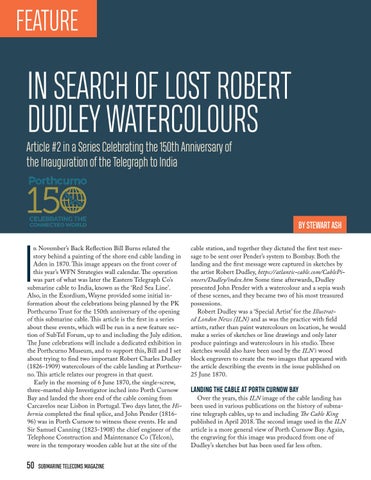 BY YVONNE LIN BY STEWART ASH

n November’s Back Reflection Bill Burns related the story behind a painting of the shore end cable landing in Aden in 1870. This image appears on the front cover of this year’s WFN Strategies wall calendar. The operation was part of what was later the Eastern Telegraph Co’s submarine cable to India, known as the ‘Red Sea Line’. Also, in the Exordium, Wayne provided some initial information about the celebrations being planned by the PK Porthcurno Trust for the 150th anniversary of the opening of this submarine cable. This article is the first in a series about these events, which will be run in a new feature section of SubTel Forum, up to and including the July edition. The June celebrations will include a dedicated exhibition in the Porthcurno Museum, and to support this, Bill and I set about trying to find two important Robert Charles Dudley (1826-1909) watercolours of the cable landing at Porthcurno. This article relates our progress in that quest. Early in the morning of 6 June 1870, the single-screw, three-masted ship Investigator inched into Porth Curnow Bay and landed the shore end of the cable coming from Carcavelos near Lisbon in Portugal. Two days later, the Hibernia completed the final splice, and John Pender (181696) was in Porth Curnow to witness these events. He and Sir Samuel Canning (1823-1908) the chief engineer of the Telephone Construction and Maintenance Co (Telcon), were in the temporary wooden cable hut at the site of the

cable station, and together they dictated the first test message to be sent over Pender’s system to Bombay. Both the landing and the first message were captured in sketches by the artist Robert Dudley, https://atlantic-cable.com/CablePioneers/Dudley/index.htm Some time afterwards, Dudley presented John Pender with a watercolour and a sepia wash of these scenes, and they became two of his most treasured possessions. Robert Dudley was a ‘Special Artist’ for the Illustrated London News (ILN) and as was the practice with field artists, rather than paint watercolours on location, he would make a series of sketches or line drawings and only later produce paintings and watercolours in his studio. These sketches would also have been used by the ILN’s wood block engravers to create the two images that appeared with the article describing the events in the issue published on 25 June 1870.

Over the years, this ILN image of the cable landing has been used in various publications on the history of submarine telegraph cables, up to and including The Cable King published in April 2018. The second image used in the ILN article is a more general view of Porth Curnow Bay. Again, the engraving for this image was produced from one of Dudley’s sketches but has been used far less often.